The big thing about these babies is now you're not tethered to the computer as the audio can be transmitted up to 40 feet with the G930. The headset lets you hear surround sound via Dolby Pro Logic II technology giving you simulated surround from two drivers.

A noise-canceling microphone ensures your enemies and your friends hear you clearly through the game. If you want to quiet down, just rotate it out of the way to automatically mute it. 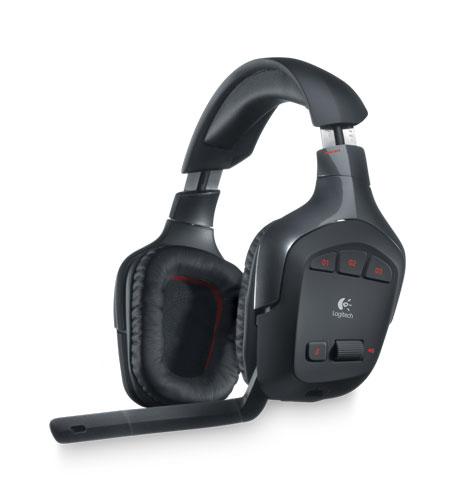 Logitech® Wireless Gaming Headset G930
Level up without being tied down – in 7.1 surround sound

Product Overview
The Logitech® Wireless Gaming Headset G930 lets you level up without being tied down. Gaming-grade wireless gives you a lag-free, interference-resistant connection with a range of up to 40 feet (12 meters)*—so nothing stands between you and victory. 7.1 surround sound powered by Dolby® technology delivers a detailed, positional sound field that lets you hear your opponents before they see you. You’ll have total command over music, voice morphing, chat clients and more with three programmable G-keys. And a memory foam-lined headband fends off fatigue, while plush ear pads ease pressure points and seal out unwanted noise.

Key Features
Gaming-grade wireless: The G930 wireless connection is very fast, with speeds of up to 38% faster than Bluetooth®, so gamers won’t experience any delayed audio. And, the headset switches between frequencies for a lag-free, interference-resistant connection with a range of up to 40 feet.
7.1 surround sound: Dolby Pro Logic® II technology delivers virtual surround sound that lets you hear your opponents before they see you.
Customizable control: Three programmable G-keys allow you to customize your gaming experience with one-touch control over music, voice, morphine and chat.
Lasting comfort: memory-foam lined headband and plush ear cups ease pressure points and seal out unwanted noise.
Noise-canceling microphone: Focuses on your voice and eliminates background noise for better audio clarity. Microphone automatically mutes when rotated out of the way.