Is Australia getting an SNES-style Wii U Pro Controller?

by: Sean Colleli - posted: 10/17/2012 2:03:00 AM
More On: Nintendo Wii U
Nintendo Everything has a curious post up, claiming that EB Games Australia's website is offering preorders for a Wii U Pro Controller that bears a striking resemblance to the good old Super Nintendo pad. Supposedly it's a 3rd party product, not something Nintendo themselves are putting out, and so far the only picture of the thing is a dodgy-looking photoshop job of the official renders Nintendo has for the first party black and white Wii U Pro Controller. The pic might not be exactly easy on the eyes but I must admit it has me intrigued.

Before the Wii U was revealed, there were rumors that it would resemble a modernized Super Nintendo. Sadly that didn't come to pass, but could you imagine if it had? It would certainly look better than the nondescript rounded lump that the Wii U turned out to be. It's also been a while since Nintendo pimped out the nostalgia of their fans--remember that awesome NES styled GBA SP? I still have one in a drawer somewhere.

Personally I feel that there's a lot of undue or feigned nostalgia for the NES, and it's about time the SNES got a little more love. Yeah the NES was groundbreaking, but if you take off the rose-tinted shades you'll remember that the SNES is where the games got really good. Besides, the Super Nintendo is over 20 years old--isn't it about time that Hot Topic started pasting it all over everything they sell? There are already too many 13-year-old kids walking around with NES and Atari controllers on their shirts, stuff they have no actual memory of.

Hopefully this SNES Pro Controller actually gets released, and here in the States too. If it doesn't, you can bet that I'll be importing one, and then ordering a custom SNES skin for my Wii U. 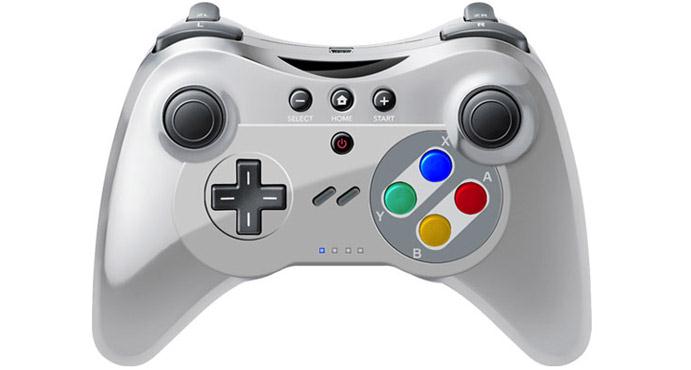