Intel's next chip line will have some greatly improved graphics

by: John - posted: 5/2/2013 5:30:00 AM
More On:
Intel's been including an integrated GPU in their i7 line, but their next set of CPUs should have some greatly increased power. The Haswell line of CPUs will hold three different lines of GPUs depending on the product you get.

Ultrabooks with 15W processors will get the Intel HD 5000 GPU, which will give those products faster graphics with good power savings. Bump up to some more robust thin and light setups and you could get the Iris GPU. The Iris is said to be double in speed over last year's HD line.

More power consumption means faster graphics as the Iris Pro in the 47-55W range will get the Iris Pro, which has embedded DRAM doubling the speed on the H-series of chips. Finally, desktop models can see a 3X increase in speeds on CPUs consuming 65-84W of power.

Besides offering up DirectX 11 compatibility and faster speeds, you'll be able to finally do multi-display options as the Iris an drive up to three monitors. Thinking of picking up a new 4K TV? Well, you won't need a dedicated graphics card to use that TV with a computer as Haswell will have enhanced 4K support.

I've been waiting on Haswell to upgrade my system, but the 4K and improved graphics support might drive me in upgrading my media centers as well as my main gaming rig. 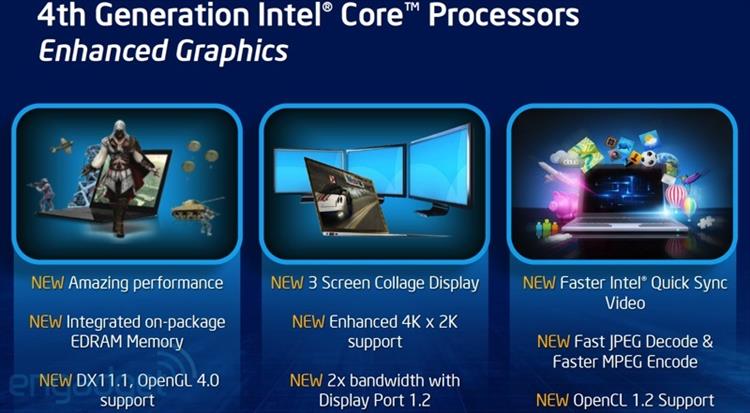