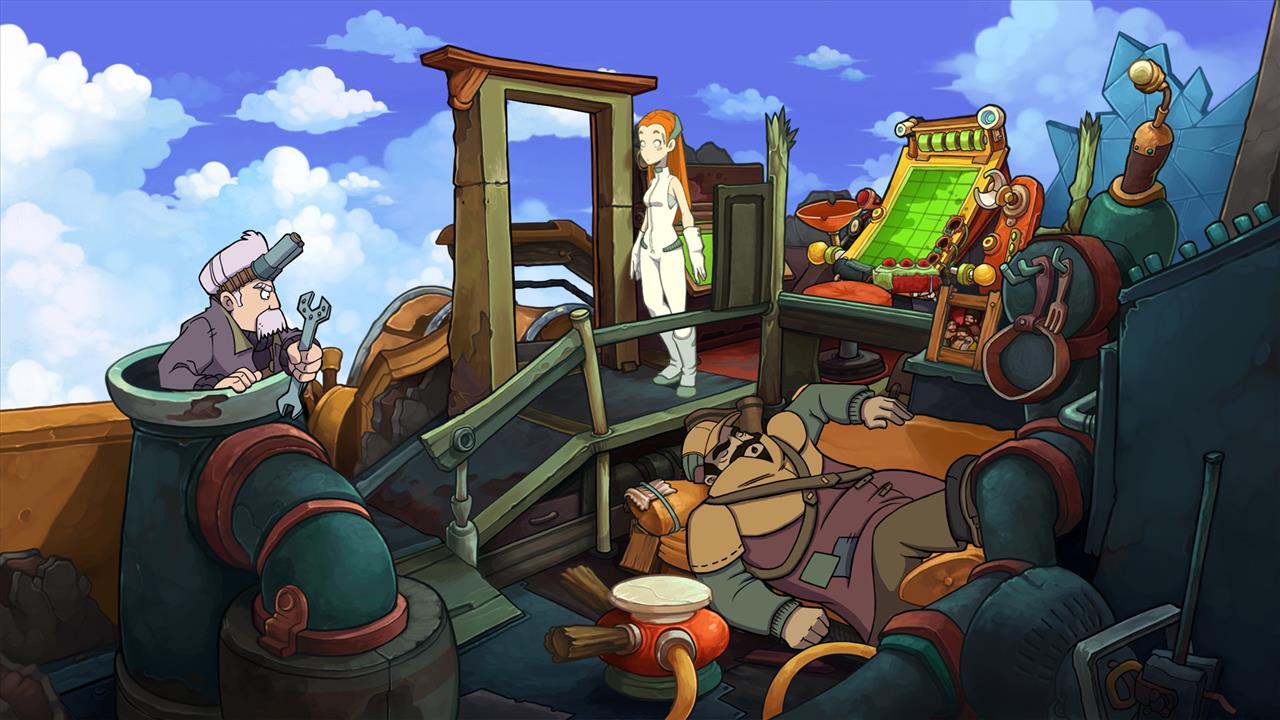 Goodbye Deponia is the third and final installment of a point-and-click adventure trilogy published by Daedalic Entertainment. All three entries follow the exploits of series anti-hero, Rufus, and his attempts to flee his junkyard home planet of Deponia to reach the idyllic land of Elysium nestled in the clouds.

Rufus, quite intentionally, is drawn up as a narcissistic jackhole. He's unlikable in every respect possible, which forces every other non-player character to roll their eyes and play the straight man to Rufus's severely antagonistic role as the main character. He has a range of beautifully animated expressions which range from stoner smug to caught-in-the-headlights focused, and from bleary-eyed determination to cluelessly incredulous. He frequently folds his arms to solidify his landing on another premature judgment, or he falls asleep standing up when idling for more than a minute.

The junkyard planet of Deponia can be a wonder to behold. Blocky, slapdash cutters and cruisers course through the air on immense monorails. Deponia itself is broken-down beauty at its finest. While Elysium is all silver-lined clouds and laid-back citizens whose only worries are the most whimsical of first-world problems.

Our scrappy-headed protagonist, however, runs with such a juvenile sense of humor that you'll need to put on your junior-high goggles in order to appreciate most of the jokes. I'm doing my best to fit into that mindset, but, so far, the laughs have been few and far between. The comedic timing is tightly directed, sure, but there are too many shaking-my-head scenarios that drain the life from wildly unfunny writing. There's a protracted conversation with someone sitting in an outhouse while flatulence punctuates the air and his sentences; Rufus sets out to save his infatuation from danger -- an Elysium woman named "Goal" -- simply because in one scene, Rufus could "barely see her underwear" in her compromised state; and in another scene, Rufus's only motivation for solving an inexplicable set of puzzles is because of his near-homophobic reaction to seeing a male comrade with a towel wrapped around his waist.

Goodbye Deponia sets off with breakneck pacing, especially for a point-and-click romp. The puzzles were linear and moved along with a determination similar to that found in last year's The Walking Dead. But then the traditional puzzles show up with little explanation, fueled by an inventory screen that is frighteningly deep and wide. My adventure game red flag went up as I walked Rufus through rooms he had no reasonable explanation for being in, pocketing utterly random items from everywhere like kleptomania was going out of style. But the game even accommodates a player's confusion by inserting a huge variety of voiceover lines as Rufus attempts one piece of guesswork after another.

The 2.5D screens are wonderful, and Rufus's more or less straightlaced friends do their best to root the cast of characters in people I'll eventually (hopefully) care about, but Rufus himself makes Goodbye Deponia tough to play. His borderline megalomaniacal personality drags a player from one self-aggrandizing observation to the next, with a douchebag inflection in his voice that makes you want to slap the snark right off his ignoramus face.

And yet, there are rare moments when Rufus's humanity breaks through his dudebro facade. Like when he meets a fan and Rufus suddenly loses footing from the small amount of celebrity he's actually accruing. Or when he stops for just a moment and almost makes a sensible decision before he's goaded into more thoughtless faux-heroics.

I can almost sense that there's a worthy payoff somewhere on Goodbye Deponia's horizon. These are merely initial reactions to the little I've played so far. Despite my misgivings about Rufus as one of the (purposely) least-likable video game characters I've ever encountered, I'm stunned by the simple but unique concepts behind Deponia as a fantastical steampunk world, I'm warmed by the fact that Rufus's companions exude a begrudging, pound-puppy love for him, and I'm piqued by the possibility that there's a genuine turnaround point for Rufus by the end of this adventure.

My full review will be posted next week. I'll see where Goodbye Deponia fits into a point-and-click adventure world currently dominated by standout adventure games like Memoria, The Walking Dead, and The Wolf Among Us.