by: Nathan - posted: 6/28/2013 8:32:00 PM
More On: Saints Row IV
E3 has come and gone, but if you didn't get to attend the show, don't worry cause Volition has got you covered. They released the ten minute walkthrough of the Saints Row IV that was shown to attendees at E3 and boy oh boy, does this look amazing. There is seriously just too much awesome in this video. We get to see the most badass President of the United States ever stroll through his pimped out White House, Zinyak and the rest of his alien swarm invade, the virtual steelport, the super powers, crazy weapons and new activities that will be featured in the game.

Volition has also announced another pre-order incentive. Pre-order the game at select retailers and you can run around the virtual Steelport as either The Iron Rouge or the Queen Amazonia. These pre-order exclusive outfits will be available if you pre-order at GameStop and/or EBGames and you can check them out below.

I know a lot of people complain about Saints Row because it's not like the first two games, but I welcome the silliness. I loved Saints Row The Third and thought all of the crazy changes were amazing. Saints Row IV looks like it will be an incredibly fun and crazy ride from start to finish. The humor of these games is great as well. "Bert to Ernie, Bert to Ernie".. amazing.

Now again if you didn't get to go to E3, don't worry because Jon Yan and Matt Mirkovich has got you covered with their E3 hands on coverage.
? 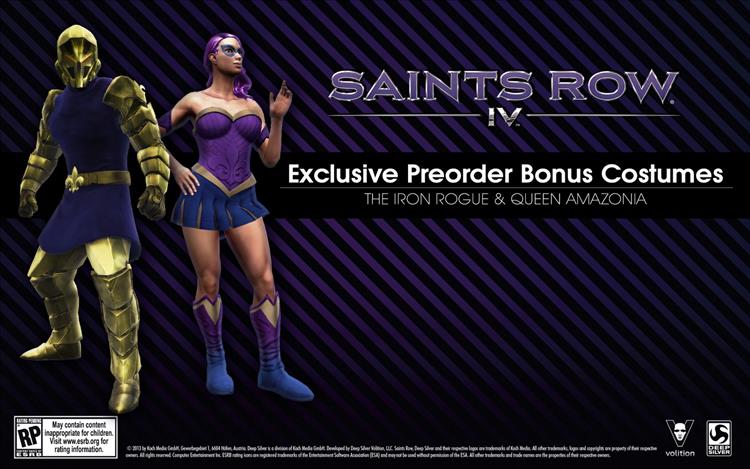