Hawken comes to life via a series of digital shorts

by: Nathaniel - posted: 4/18/2012 1:34:00 PM
More On: Hawken
Gears of War art director and feature film director Jeremiah O'Flaherty has been tapped by Adhesive Games to direct a series of digital live-action-combined-with-CG shorts based on the upcoming online mech game, Hawken.  The first one will premier during E3 later this year.

You can see a behind-the-scenes shot below.

Not much else is known about these shorts, so we'll just have to wait until they start coming out before we can pass some sort of possible judgment on them.  It seems pretty hard to mess up short films of giant robots doing giant robot-y things, however.  Those following Hawken's progress are probably already aware that it provides a breeding ground for awesome videos. 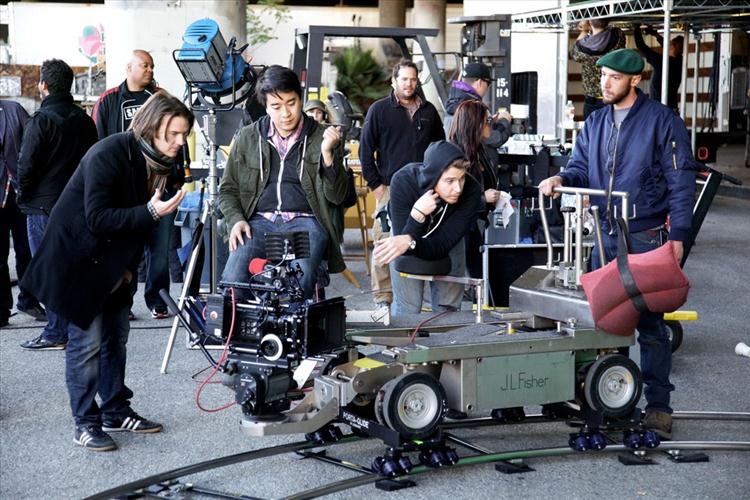 Adhesive Games, Meteor Entertainment, and DJ2 Entertainment announced today a cinematic collaboration with Gears of War art director and feature film director Jeremiah O'Flaherty on a series of digital shorts based on the HAWKEN video game. The first of these live action combined with CG shorts will debut at E3 in Los Angeles in June.  A behind the scenes photograph from the set can be found exclusively at playhawken.com/images/oflaherty.jpg.

Mark Long, CEO of Meteor, stated, “When we had the idea of producing these shorts I immediately thought of Jerry O’Flaherty.  Jerry is literally the best, and perhaps the only feature director in the world, capable of combining live action with the Unreal 3 game engine.  Khang and I were psyched when he agreed to direct but after watching the rushes on the set we can assure HAWKEN fans that Jerry is going to KILL it!”  O’Flaherty, writer and director of the shorts, said, "The beautifully atmospheric visuals and kinetic energy of the first video release of HAWKEN took me by surprise.  It's been a long time since a game has intrigued me and inspired me the way HAWKEN has and it made me eager to be a part of that world.  I connected with DJ2 with a desire to participate in bringing another aspect of the HAWKEN world to life, specifically putting names and faces to several of the pilots driving the deadly war machines in HAWKEN.  Through these characters I wanted to begin to speak to the fiction behind the game, to introduce people to a mythology that is just as interesting and intriguing as the first view of HAWKEN made me feel."

HAWKEN’s pilots came to life on multiple set designs, including enduring a downpour at Friday’s outdoor location.  The magic of these set designs along with amazing costumes, that included apparel from Endless Ammo, helped bring together the otherworldly futuristic battlegrounds of HAWKEN.  One of the highlights was watching Adhesive’s CEO and the creative genius behind HAWKEN, Khang Le, walk on set for the first time and see what was once locked away in his imagination come to life.  Le stated, “It was so awesome to see the physical set of HAWKEN. Seeing the film crew working passionately to capture the feeling of the HAWKEN universe was a humbling experience.”

"We've had a blast collaborating with Meteor and Adhesive to expand the HAWKEN universe into a franchise that supports compelling transmedia storytelling," said Dan Jevons, CCO of DJ2 Entertainment.  "It's a pleasure to work with first class talent like director Jerry (O'Flaherty) and star Edi (Gathegi)." said DJ2 CEO Dmitri M. Johnson; "I can't wait for fans to get their first taste of live-action HAWKEN storytelling when the shorts drop later this year." Jevons and Amitabh Klemm join Johnson as co-producers on the viral shorts.

More:  Behind the scenes photograph from the set can be found exclusively on www.playhawken.com/images/oflaherty.jpg.

About Meteor Entertainment: Based in Seattle, WA, Meteor Entertainment is a newly formed videogame publisher focused on building out a top tier roster of talent to successfully publish F2P games globally, with an emphasis on compelling content and setting the standard for customer service and community engagement. Meteor’s 12/12/12 launch of HAWKEN, created by Adhesive Games, will be its first tent pole title. To learn more about Meteor Entertainment visit www.meteor-ent.com and be sure to check out www.playhawken.com.

About Endless Ammo: Endless Ammo produces utilitarian apparel for mission-oriented functionality. Designed in San Francisco, the company is heavily reliant on military aesthetics with an emphasis on contemporary looks and innovative cuts. Headed by ex-military man James Rhoades, the brand builds off his experience in the service with forward-thinking designs that not only feature useful detailing but also remains fashionable while doing so. To learn more about Endless Ammo visit www.endlessammo.com.