This run of screenshots (it's actually grown boring to discuss how consistently beautiful they are) have that F-4 Phantom II going vertical over the Pentagon, an F-15 Eagle banking hard over a dam, an SR-71 Blackbird flying presumably undetected over a foggy metropolis, a crazy Dorito chip-shaped A-12 Avenger, and the F-111 Aardvark which is actually only flown by the Royal Australian Air Force nowadays. 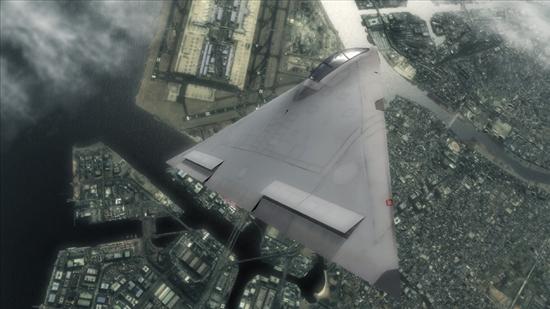 SAN FRANCISCO – May 6, 2009 – Today Ubisoft announces that the "U.S. Eagles” downloadable content (DLC) pack for Tom Clancy's HAWX(TM) for the Xbox 360® video game and entertainment system from Microsoft and the PLAYSTATION®3 computer entertainment system will be available on May 7, 2009. The price for the U.S. Eagles Pack DLC is 400 Microsoft Points or $4.99 for the PLAYSTATION®3 system.

In the U.S. Eagles pack, control the skies with a selection of US futuristic and veteran aircraft that includes the battle hardened F-4 Phantom II, the famous Blackbird and the F-111 Aardvark tactical striker. Fly the A-12 Avenger stealth bomber prototype or the reconnaissance variant based on the F-15, the Peak Eagle.