by: Jeremy - posted: 10/18/2012 11:00:00 AM
More On: Skylanders Giants
Just a few more days my friends and the biggest crave of the 2011 Holiday Season will be returning for round 2! Skylanders Giants launches this Sunday and as I am sure that you have seen around the Internet, the reviews have started popping up from media outlets all over the place. Our own Dan Keener is hard at work on our review of the game, along with the help of his kids (Skylanders is a family experience after all), but I figured that I would check in today with my impressions from the first hour or so of the game.

Read on to find out just why I think Toys for Bob will be struggling to keep up with the demand of the game again this Holiday Season! 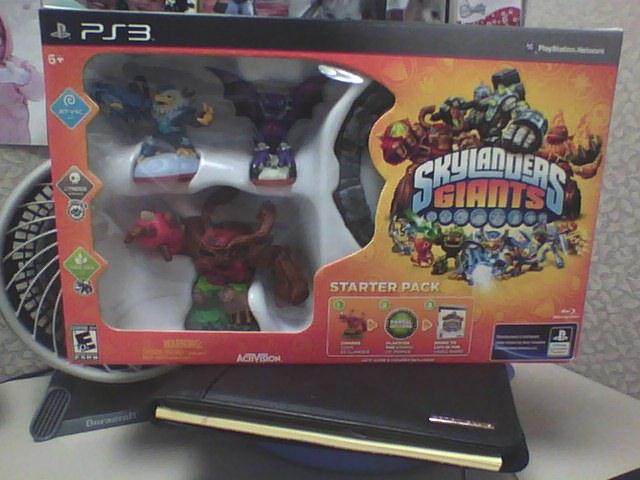 I have to be honest up front: I am a HUGE Skylanders fan. The original game brought something special to my household in the way in which it allowed me to finally enjoy a game with my young daughter; she is helplessly addicted to not only the game, but collecting the figures. As much as it pains me to say it, I am too! When the second game was announced, I was absolutely ecstatic, and even more so when I got a chance to check out the game earlier this year at an event out in Los Angeles prior to E3. Even at the early stage that I saw the game in back in May, I knew that Toys for Bob was preparing to strike gold again. The final version of the game is finally here and based on the experience that I have had with it thus far, it is bigger and better than the first game was in every way.

While Dan will be reviewing the Wii and Xbox 360 version of the game, I ended up with the PlayStation 3 version. There are a couple of changes to the start kit fans will find in stores this year, namely in terms of the included characters and a slightly altered Portal of Power. This time around, Toys for Bob has elected to include a wired version of the Portal with the PS3 version of the game. Granted, owners of the original game can still use their wireless Portal that they received with the original Skylanders.

Honestly, I am a little happier to have a wired one now due to the ability to plug it into my PC for integration with the Skylanders website. There are three Skylander figures included in the pack: the new Jet-Vac, the new Tree Rex, and a Series 2 figure for Cynder. Tree Res, one of the Giant class of characters, also has the Lightcore technology which causes certain parts of his body to light up when he is placed on an active Portal. In his case, both of his eyes and the jewel on the back of his hand light up nice and bright, looking very cool when he is in use.

It is clear form the start, literally, that Skylanders Giants is a more refined experience than the original game. Everything from the actual gameplay even to the in-game menus is more polished and user friendly than ever before. The development team seems more “sure” about what they were doing in Giants and waste no time in getting you into the experience. From the outset of the first stage, the game has you testing not only the individual abilities of your character but also the line up of figures in your collection. There are locales and challenges as early as the first chapter that will have you swapping out characters constantly to access certain areas and treasures.

The focus of the game seems to have changed a bit as well. The developers have really found the true identity (and strength) of the game in terms of its exploration and focus on loot gathering. This really feels like a simplified (and I don’t mean that in a bad way) loot dropping action game now, think Diablo for kids! Every enemy and destructible object in the environment will drop a variety of coins and treasure. The world is also more inviting in terms of pushing the players to explore every nook and cranny of its layout to find hidden treasure chests and prize rooms. The fun is in exploring the world and experimenting with the different classes of characters, which is awesome for younger players who just like to interact with the world without any pressure of specific goals or limitations.

On the other hand, that doesn’t mean that the game is a clear-cut simplified adventure for the young ones in your house. There are a lot of extra challenges and goals that you can tackle if you choose to which add an element of replayability to the game. There is a checklist at the end of each level for things such as completing it under a target time (speed runs), collecting all of the various hidden treasures, finding the hidden character tokens, and even unearthing all of the hidden rooms / locations. The younger players can enjoy the adventure of just making their way through a stage while older ones can challenge their selves to complete these other objectives. It truly offers something for each type of gamer in your family.

I know that I have barely scratched the surface of the game and I can’t wait to take it home and share it with my daughter. The first 2 levels of the game were an absolute blast and they will only get better as I bring my other characters into the fold and open up new areas and abilities. It has only been an hour or so into the adventure and I am as helplessly addicted as I was last year. The experience is more polished than the fist one but every bit as fun, which is exactly how a sequel should be. This is definitely going to be a hit like last year’s release, and rightfully so.

You can expect Dan’s full review of the game very, very soon and look forward to picking up Skylanders Giants when it launches on Sunday, October 21, 2012!