First Impressions -- The Legend of Spryo: Dawn of the Dragon

Sharper minds than my own have argued the necessities of direct, immediately-understandable controls in a platformer.  Mario and Luigi, Jak and Daxter, Ratchet and Clank ... these are now-iconic duos that will attest to that need.  But Spyro and the newly-redeemed Cynder both subscribe to floaty, imprecise movements that are at once an aforementioned necessity (they are both dragons) as well as an unmentionably temple-throbbing headache.  Single-jumps are decidedly unnecessary.  Double-jumps are mushy.  Flying is inexplicably tethered by gravity when you need height, and unfailingly floaty when you need to land.

Moving about lava-carved caverns is a great start to any abrupt and unexplained intro:  Both Spryo and Cynder are encased in an enormous amber jewel, communicating telepathically, and then able to shatter their way out moments later.  This is likely a continuation from the previous entry in the Legend of Spryo series, but I'm coming at this with fresh eyes and no context for current events.  Without a detailed history of Spyro's past, I'll see if Dawn of the Dragon will sink or swim on its own merits.  And so far?  It doesn't look like dragons can swim.

The decidedly Balrog-looking thingy that attacks Spyro and Cynder -- surrounded by a cheering arena of goblin-thingy onlookers -- is a momentous beginning.  There's barely time to learn that you can grab enemies and spin them around before the Balrog-thingy decides it's seen enough.  Too bad its white-hot anger and molten-hot skin comes up with nothing more creative than to swat haphazardly at the two hapless dragons.  And to retaliate, Spyro (or Cynder -- you can interchange rolls or play co-op at will) attack the Balrog-thingy's hand.  It's po' widdle hand.

It's some constantly-interrupting Tony the Tiger of a hooded ranger than keeps tossing in all the cutscenes and making the cool bow shots like putting an arrow into the Balrog-thingy's eye socket.  Plus, as Tony the Tiger (not his real name) makes beautiful bounds from ledge to ledge, I'm in a constant battle with a camera that sometimes swings in an almost-360-degrees (though it's rare) to a camera that's more often riveted to some less-than-convenient angle against a wall.  The camera invents new inconvenient angles as I pop into a new room, and every fifth or sixth jump seems to have yet another cutscene intervene before I fully pull off my landing.

French developer Estranges Libellule (also responsible for the Asterix & Obelix games) has made it very clear that you, the player, are not allowed to have control of Spyro for any reasonable length of time.  Estranges Libellule has also made the mistake of positing a camera that wants to play the game for you.  I'm sincerely hoping that this is an indoor environment issue only, and that exterior environments will lend more of the freedoms that seem inherent to flying a dragon around.  As far as the introductory chapter goes, Dawn of the Dragon's lack of trust in the player makes it very difficult to navigate the too-tightly leashed environs.  Though, for unintentional laughs, it is always great to see your AI-controlled partner (be it Spyro or Cynder) constantly missing jumps and plummeting inches away from the targeted ledge.  Pretty much couldn't land a single jump.  It's as hilarious as it is incompetent.

Yet the heartwarming artwork gives me a flicker of hope, despite everything.  It's what made me accept the review assignment from Chuck in the first place.  And even though Spyro has shown me that he can't be controlled yet, perhaps he'll also show me some marvelous locales.  I haven't lost all hope that this dragon, after all, might be sleeping on a mound of treasure. 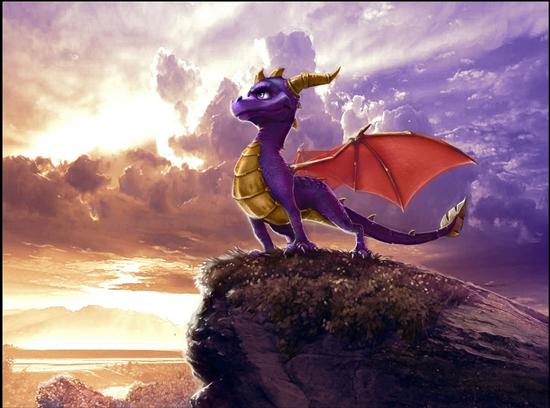