Encore giving away some Xbox 360s

by: Dan - posted: 11/25/2010 8:43:00 AM
More On: KingofCheapGames.com
Encore Inc, a game publisher that has the Hoyle, Wheel of Fortune, Jeopardy! and Diner Dash brands under its corporate umbrella is launching a new website and willing to give away some Xbox 360’s to promote it. On December 20th, Encore’s newest retail site www.KingofCheapGames.com will launch and will feature PC and Mac games at $9.99 or less pimped by their “King of Cheap Games”. After looking at the current site and some of Encore’s other retail sites, it appears that physical media (i.e. shipped boxes and discs) will be the primary sales option, but it doesn’t specifically say whether or not they will support digital distribution.

As for the contest, head over and register for the chance to win the grand prize of a Kinect Ready 250 GB Xbox 360 or one of the two secondary prizes of a console and either Halo Reach or Star Wars: The Force Unleashed II. It is free to enter and they will draw the winners on December 20th. 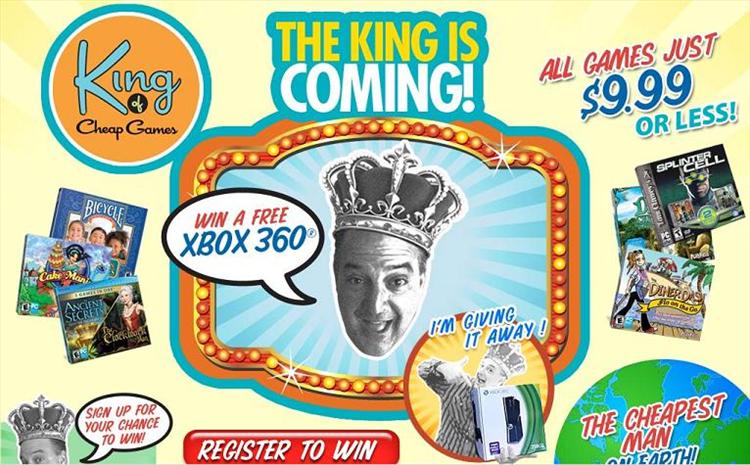 The company will be giving away a new Kinect ready Xbox 360® 250GB console and a game. Two winners will receive a console and either Halo Reach or Star Wars: The Force Unleashed II for Xbox.

KingofCheapGames.com features the wacky “King of Cheap Games” character. The new site will offer hundreds of popular PC and Mac games at $9.99 or under.

Today’s announcement marks the seventh online retail store to be opened by Encore, and follows the highly successful launch of BicycleCardGames.com and the addition of the PUNCH! Software franchise to the Encore family earlier this year.

The promotion runs from Wednesday, November 24, 2010 through Sunday December 19, 2010. To enter to win an Xbox, applicants must visit www.KingofCheapGames.com to register. The sweepstakes is free to enter. Winners will be randomly drawn December 20, 2010 and announced within 3-6 weeks.