ECS launches P55H-A for Core i5 and Core i7 processors

by: John - posted: 9/9/2009 6:34:00 AM
More On: P55H-A
With the recent announcement of the Core i5 we have a few new motherboards coming out to support the new Intel processor. ECS has just launched the P55H-A Black Series aimed at gamers. This motherboard features the LGA 1156 socket and will let you use AMD's CrossFireX technology for better graphics performance.

There's 4 DDR3 DIMMs with support for up to 16GB of ram. Plenty of USB ports, both internally and externally, will provide plenty of space for plugging in peripherals. For those that want to overclock, there's the M.I.B. II OC BIOS utility that can help beginners overclock their computer. One of the cooler things on the board as well is the eJiffy Linux solution that lets you bypass the OS and boot straight into a web, chat, or picture application in seconds in case you just want to use your computer for some light tasks. 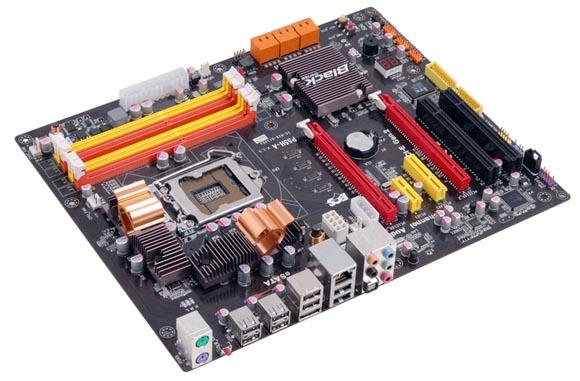 Taipei, Taiwan, September 8th, 2009 – Elitegroup Computer Systems (ECS), a leading motherboard, graphics card, barebone system and notebook manufacturer, today announced the launch of the P55H-A Black Series motherboard based on Intel® P55 Express chipset supporting the latest high-performance Intel® Core™ i5 and Core™ i7 processors. The LGA 1156 socket motherboard is ideal for gamers setting up a feature rich system on a tight budget. The ECS P55H-A supports CrossFireX™ for blistering fast graphics as well as Intel’s latest features such as Turbo Boost Technology which overclocks your CPU opportunistically based on the temperature, current and power settings. This is enhanced by DDR3 1333MHz memory support, for fast data throughput using a maximum of 16GB in 4x DDR3 DIMMS.

Tomorrow’s performance today
The ECS P55H-A motherboard has all the functionality that a gamer needs as a power user. Features include 4x DDR3 slots @1333MHz, an eSATA port for external storage, IDE SATA with RAID 0,1,5 & 10 support to allow for large storage capacity , 8x USB external ports+ 6x USB internal for ample connectivity options, 8 Channel Realtek AL888S HD Audio with SPDIF out for full and rich sound options to bring your games and audio needs to life. It has Gigabit LAN for fast and secure internet connectivity, and 2x PCIe x16 (2nd Generation) slots for dual graphics CrossFireX™ capabilities. The MOSFET region has a 6-phase high quality PWM which regulates the voltage to maintain clean power to your CPU, while the Dragon style heat sinks ensure stability and extra cooling for your chipset and components.

Innovative ECS Technology Utilities
In addition the P55H-A has a plethora of exclusive ECS technology such as the M.I.B. II OC BIOS utility that assists beginners to overclock effortlessly and the unique eJiffy Linux solution which once selected from the BIOS can allow you to by-pass your OS and access eWeb (Internet access), ePix (Picture interface to view pictures) and ePal (chat messenger program) directly within seconds of turning on your PC. It can be accessed in multiple languages. Also included in this Black series product are the innovative 4E design features: Easy Clear, Easy Debug, Easy Attach and Easy buttons, which make the P55H-A motherboard very easy and convenient to use, while the newly added intelligent power saving (IPS) indicators help make sure green power saving are within everyone’s reach. This ECS P55H-A is Windows 7 ready, RoHS compliant, EUP compliant as well as Energy Star 5.0 compliant making a fully featured and future proof motherboard of choice for all consumers looking for quality at the right price.