by: Chuck - posted: 6/4/2009 12:51:00 AM
More On: E3 2009
Fans of classic brawling games like the Teenage Mutant Ninja Turtles game the Double Dragon games might want to check out Unbound Saga for the PSP when it is available for download from the PSN store on July 16th.
The game has an interesting hook as you play Rick Ajax a comic book character that’s become aware that he’s a comic book cliche and wants out. Along with his partner Lori Machete he’s decided to take on the creator and do something meaningful with his life. Think Peter Parker deciding he’s sick of the whole “Great power/great responsibility thing” and trying to take out Stan Lee.

The really cool part of the game is how the comic theme is applied to the game. Enemies don’t just appear from the sides but are actually drawn onto the screen by the creator as he tries to stop Rick and Lori. As you play through the game you can switch back and forth between the brute strength of Rick and the speed and gadgets of Lori by pressing the select button. There’s an element of strategy here as the character not being played will heal up so if one character is taking a beating you can switch over to the other character to heal.

Killing enemies will earn you experience points which you can then spend on upgrading skills for Rick and Lori. As you progress through the game you can customize the experience a bit by splitting the points between the two or focusing on developing one of them over the other.

I had a lot of fun with Unbound Saga as the comic book look and feel along with the great sense of humor make this worth checking out if you’re a brawler fan or are looking for a good laugh. 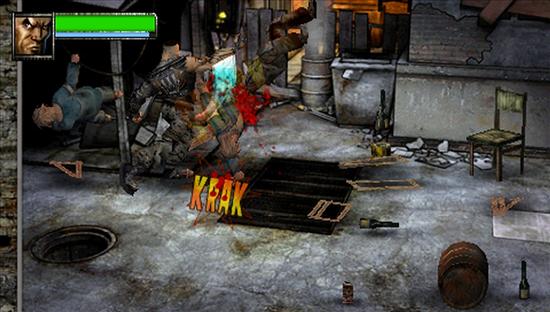