by: John - posted: 6/3/2009 12:53:00 AM
More On: E3 2009
At the D3 area in the Namco booth, I was shown a few titles that tied into movie and TV shows. Astroboy is a movie coming out in a few months and High Voltage was brought in to bring the game based off the movie to life. The game, which is slated for the Wii, PS2, PS3, and DS, uses the same engine as The Conduit but turns it into a side scrolling platform game. It’s a 2.5D game where you have a left to right action but set in a 3D environment.

Astroboy is easy to pick up so it’s accessible for all range of age groups and gamer experience. Besides melee attacks, Astroboy also has a drill attack, arm cannon, finger laser, and the popular butt machine gun. Yes, Astroboy shoots bullets in a circular motion from his butt. It’s always a crowd pleaser.

The game has four difficulty levels ranging from easy and for those that are hardcore gamers wanting a challenge. There are 30 levels comprised of both material inspired by the movie and all new content. The levels aren’t just side scrolling platform style game as I was shown an R-Type like flying sequence with Astroboy. The one really unique feature of the flying sequence was seeing Metro City rotate around in the background. It was really smooth and unique looking to a side scrolling shooter.

When you encounter enemies in Astroboy, some may look the same but the color they exhibit tell you what kind of attack they can do. For example, an enemy with green will throw grenades while those same enemies in blue will carry a machine gun. It’s a system that can benefit kids who will know what kind of enemies they are based on the color scheme.

If you got a friend, the person can pick up a controller and join in as a second Astroboy. It’s nice to be able to cooperatively play with someone. While there aren’t any hard-coded team attacks, you can use Astroboy’s basic abilities to setup some tag teaming.

High Voltage as taken great care to keep the iconic image of Astroboy. No matter which way he’s facing, you’ll always see the two spikes of his air. They also worked hard to make sure the game is easy to play for everyone and to pay homage to the manga and anime. Look for Astroboy in October to be released with the film.


The Secret Saturdays: Beasts of the 5th Sun

The Secret Saturdays: Beasts of the 5th Sun is another High Voltage game and it’s based off the Cartoon Network TV show. It’s another side scrolling platformer where you can control various members of the Saturday family.

In the demo, Zak is equipped with a staff along with a claw. He can also take control of cryptids which are monsters that the family catalogs. Cryptids are undiscovered by science and the Saturdays keep these monsters a secret from the public.

One of the cool things about the game is the ability to use the cryptids to solve puzzles. For example, you can maneuver one of the cryptid to a position where Zak can grapple it and swing to the next area. The difficulty and complexity of puzzles increase as the game goes along but you get a lot of the basics on how to use the cryptids in the beginning so you can figure out how to fully utilize them to solve the puzzles later on.

Like Astroboy, there’s some 3D elements to the game. While it’s mostly a 2D scroller, there are some aspects of the 3D environment that come into play. Cameras pan around in certain areas and there will be some parts of the level where you move your character on the Z-axis.

With 10 levels and 7-10 hours of gameplay, The Secret Saturdays: Beasts of the 5th Sun is a family friendly game that makes you think a little as well. The game is set for October on the Ps2, PSP, DS, and Wii. 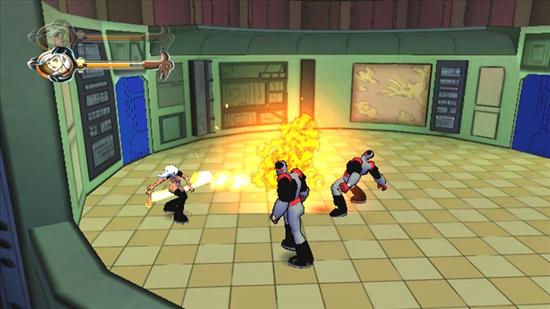