by: Chuck - posted: 6/6/2009 10:32:00 AM
More On: E3 2009
The Gothic series of RPG’s is a bit like soccer and the Top Gear as they are huge in Europe but don’t have a huge following here in the US. To correct this problem JoWood is tweaking the gameplay a bit to appeal to an American audience. The trick to do this is to add the necessary “North American flair” without straying too far from the roots of the game (it’s “Gothicness”)  This is where Arcania: A Gothic Tale comes in

The two features they are incorporating is a new quest tracking window and a mini-map. Hard core fans can turn these things off if they want to but you’re going to have to be super hard core to not want these in the game. The other significant is the combat system as JoWood is adding a lock on system to the game. Again this is something you don’t have to use and you actually get a damage bonus for not using the system which should help wean people off the system as they learn the game mechanics.

Another big change is that the game is being developed for the PC as well as for the Xbox 360 and PlayStation 3. During our demo the presenter used an Xbox 360 controller hooked to a PC to show the game so I don’t expect there to be much of an issue with the controls if you decide to go that route. Hardcore gamers will stick with the standard keyboard and mouse but the game is very playable with the controller.

The game has gotten a significant graphical overhaul and was one of the prettier games at the show. One of the cool features of the engine is the water system. When it rains the water will collect in ruts in the environment and form puddles as well as flowing through the world in a more realistic way thanks to the physics engine managing the fluid dynamics of the game.

Arcania also has a full day/night cycle which you can use to your advantage. All of the NPC’s in the game have schedules that are based around this schedule and the game has spells which allow you to change the schedule which can make gaining access to certain areas easier. You can also make it rain in the game which will help you incentivize guards and others to go indoors so you can sneak past them.

The game continues the tradition of not naming the hero of the game but this time you play a new unnamed hero. To describe the plot a little better I’m going to call the hero from the old games Black Stig and the new hero White Stig (this is a reference that the Euros will get). In the new game it looks like Black Stig is the bad guy and White Stig must now set off to see what the deal is. We didn’t get much of a plot beyond that but I would expect we’ll get more info on it before the game is released.

Arcania: A Gothic Tale  is set to ship this winter for the PC with the console versions hitting around the same time if not a bit later. I think the game is going to be a hit with the Oblivion crowd as the game looks fantastic and seems to play well and should appeal to the hardcore and casual RPG crowds. 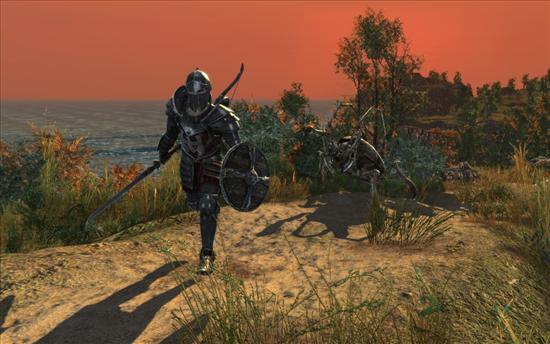