by: Chuck - posted: 7/18/2008 12:46:00 PM
More On: E3 2008
Mirror's Edge had a lot of buzz around it coming into E3.  The game's parkour focused gameplay was intriguing but I wondered how hard it would be pull off some of the cool moves in the trailer without having to use all the buttons on the controller.  It turns out I had nothing to worry about as the game is extra ordinarily easy to pick up but has enough depth that you're not going to master the game anytime soon.  I had the chance to play the cityscape demo from the trailer on a PS3 (the game is also coming to the Xbox 360 and the PC).  It was pointed out to me that the game is not all about running on rooftops and that there are a lot of other types of levels and gameplay types in the game (listen to the interview below for more specifics). The thumbstick controls are your standard first person shooter setup with the left thumbstick controlling movement with the right stick controlling where you look.  The key comes in the context sensitive controls in the game.  The L1 button takes up over objects while the L2 button takes you under them.  For example, of you're running at a pipe you can either vault over the pipe or slide underneath it.  It takes a little getting used to but once you get the feeling for that you learn about the key concept in the game, momentum. At it's core, Mirrrors Edge is a game about gaining and using momentum to get around the world.  You build momentum by running in one direction and pulling off tricks successfully.  The more momentum you have the faster you run and the farther you can leap.  You can tell how much momentum you have by how much the edges of the screen are blurred.  This helps you gauge if you have enough speed to make that next big jump or not.  Playing through the level I was surprised at how easy the game is to pick you.  As you run you start to figure out the objects you can use to get around things.  Some of them are highlighted in Red (this is the "runner vision" that helps Faith see where she's going) but there are other paths to get from A to B.  It's actually quite a bit of fun to combine several moves together such as jumping down into a tumble roll and then popping up to climb over a wall without breaking stride. One of the more advanced moves you have is the 180 jump (R1) which allows you to jump on wall and then immediately jump onto the wall behind it Mario style.  The first person perspective gives the game a level of realism that is bound to cause vertigo and motion sickness in those that are susceptible to those sorts of things.  I was walking across a pipe and looking down kicked my acrophobia into high gear.  That's not a bad thing but more of a warning. I'd also point out that the jump to the pipe in the trailer is a lot harder than it looks as I wasn't able to make it the three times I tried.  Thankfully DICE is not being shy with the checkpoints in the game so there wasn't a lot of work to get back to the point where I died. While they didn't announce any specifics I got the feeling that there are going to be timed runs in the game as you will have to complete certainly levels in a set amount of time to unlock trophies and achievements.  They did mention that the game will have some form of multiplayer so if you combine those two things together I'd say we're looking at having races through the levels which has a lot of potential. I'm interested to see how the game does when it comes out later this year.  I think Mirror's Edge is going to do well but like Assassins' Creed last year you're either going to get it or you won't.  There's no word on how many levels are in the game but the levels I did see where huge.  If you want more information about the game check out the interview I did with DICE producer Nick Channon and Lars Gustavsson, the creative director on the game. 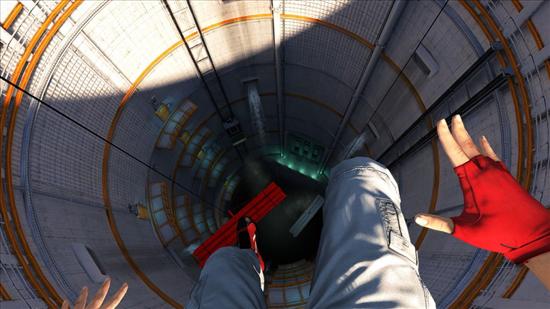