Dragon Age coming to a table top near you

by: Nathan - posted: 5/6/2009 12:49:00 AM
More On: Dragon Age: Origins
Bioware and pen and paper RPG publisher Green Ronin have announced a Dragon Age pen and paper role-playing game to be released summer 2009. The first release of the series will be a box set with everything a new player will need to get started will additional box sets and supplemental books to follow afterwards. Not a whole lot of details about the mechanics of the game or how deeply it devles into the Dragon Age universe but with games like Song of Ice and Fire, Black Company and a personal favorite of mine Mutants and Masterminds under Green Ronin Publishing's belt, not to mention Bioware's impressive list of games it has developed *cough*Kinghts of the Old Republis*cough*, I have little doubt that the pen and paper version of Dragon Age will feature a detailed world and a stable rule system. Sounds like we might have an interesting topic for an upcoming broadcast of Of Dice...and Men. For more information on the upcoming pen and paper game CLICK HERE for the offical Dragon Age community website's section on the game. 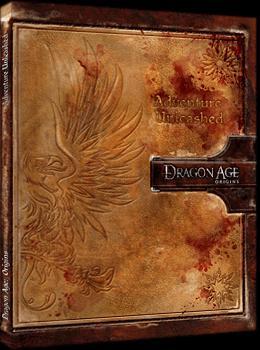 BIOWARE AND GREEN RONIN TO PUBLISH

"We’re delighted to be working with Green Ronin to explore more of the Dragon Age universe through a pen and paper role-playing game. We’re excited to deliver Dragon Age’s unique dark, heroic fantasy to our audience in a brand new way - a perfect complement to the landmark game we’re launching on PC, Xbox 360 and PLAYSTATION 3 this fall," said Dr. Ray Muzyka, General Manager and CEO, BioWare and General Manager and Vice President, EA. "Our development teams craft rich, deep worlds, and this is an excellent way to expand the franchise."

"Dragon Age: Origins has been described as the spiritual successor to BioWare’s Baldur’s Gate™, one of the most highly-acclaimed fantasy computer RPGs in the world, so when BioWare approached us to do a pen and paper version, we had to say ‘yes!’," said Green Ronin President Chris Pramas. "With our work on Warhammer Fantasy Roleplay, Black Company, and Thieves’ World, dark fantasy is in our blood and Dragon Age: Origins is the best in its class. An opportunity to collaborate with BioWare on Dragon Age: Origins was not to be missed."

The Dragon Age pen and paper RPG will be available at card shops, book and comic retailers in summer 2009. The first release will be a boxed set -- perfect for new and experienced role-players alike.  Green Ronin plans to release additional boxed sets and supplemental books, expanding the Dragon Age world even further.

Dragon Age: Origins from BioWare invites players to create their own heroes and join the fight against the darkspawn in a world of violence, lust and betrayal.  The game will feature deep character customization, challenging decisions, and a wealth of gritty, mature plots that, combined with the BioWare heritage, make it one of the most highly-anticipated releases of 2009.  Dragon Age: Origins is scheduled to release this fall on the Xbox 360® videogame and entertainment system, PLAYSTATION®3 computer entertainment system and PC.

.  Pre-order the game now at www.eastore.ea.com .

Green Ronin Publishing is a Seattle-based company known for its dedication to quality books and games. Founded in 2000, Green Ronin has won more awards for excellence and innovation than any other game company in the new millennium, and took home the coveted ENnie Award for Best Publisher an unprecedented three years running. With great licenses like A Song of Ice and Fire and the Black Company, groundbreaking games like Mutants & Masterminds and Blue Rose, and a roster of top flight designers and illustrators, Green Ronin Publishing is a leading light in the hobby game industry.

BioWare develops computer, console, handheld, mobile and online video games focused on rich stories and memorable characters. Since 1995, BioWare has created some of the world's best-selling titles, including the award-winning Baldur's Gate™ and Neverwinter Nights™ series, Star Wars®: Knights of the Old Republic™ and Sonic™ Chronicles: The Dark Brotherhood (for the Nintendo DS™). Original BioWare-created intellectual properties include Jade Empire™ and the 2007 Game of the Year, Mass Effect™. With studios in Edmonton (Alberta, Canada), Montreal (Quebec), and Austin (Texas), BioWare is hard at work on the epic fantasy role-playing game, Dragon Age™: Origins, Mass Effect 2™, the epic sequel to Mass Effect, and the story-driven massively multiplayer game, Star Wars®: The Old Republic™, as well as several unannounced projects. In 2008, BioWare was acquired by the world's leading electronic entertainment publisher, Electronic Arts. For more information on BioWare, visit www.bioware.com.

. More information about EA's products and full text of press releases can be found on the Internet at http://info.ea.com .