Tonight, I spent a good part of my evening at ShowStoppers, a 2nd tier post-show event. It's known for having lesser exciting products, though a good bit of actual business does seem to get done there. Anyways, saying you got swag at ShowStoppers is like saying you got your herpes from Paris Hilton; so did everybody else. Usually there's some pretty easy junk, and then some quality samples but you just aren't quite able to close the deal. The vendors hold onto most of the good stuff to give to buyers for the big chains.

But tonight was a good night and you'll see why below:

3 random USB drives - Kingston, Telenav and someone else had USB drives sitting out so I took them. While they are nearly ubiquitous, they are also especially useful. Even if they're tiny like these (the biggest was a 500MB drive, even though it's in a 2GB case!) they still have some value

THX Squishy robot - the mascot for the THX sound technology in foam rubber foam. It's a nice addition to the desk, and something you can throw at someone without causing injury or getting fired

Seesmic Sticker - soon to be my new Twitter client. It looks like TweetDeck, but has nice extra features. If it makes my hash tag searches work in the office, I’m down.

Slacker bottle opener and gift certificate - Slacker is a new internet radio provider that is reminiscent of Pandora, except that the music library is built by human DJ’s so it’s not relying on computer programs to build your station. You can select down to specific artists and songs to your station. It doesn’t violate the rule of no paper, because it’s paper with value. Plus, you can never have too many spare bottle openers.

OtterBox press kit - Yes, I’m putting a press kit on here, because it’s awesome. Well, the press info is not important (we already work with them so we don’t need the info), but the case they give the info out in is waterproof to 100 feet, so it’s perfect for canoeing or rafting trips.

BUILT Cable Bag - This was the swag just for walking in the door. Normally, I wouldn’t post the swag that everybody gets, but it’s too nice not to. Between this and the CES Messenger bag (which I have come to love), there’s some really nice swag to carry other swag in this year.

iRock guitar pick - iRock makes clothes with sayings that start with the lower case “i”. I wanted to pick up an iRide shirt for the wife, but they didn’t have any.

Sony MAG Raven T-Shirt - I’ve gone light on shirts and hats this year because I only rarely get shirts that fit, or look nice. And I already have 5 million hats. But this is a nice shirt. In fact the shirt is nicer than the game. Ok, that’s a little strong, but frankly I left the MAG event before ShowStoppers feeling unimpressed. It’s like yeah, you can shoot at 255 other people or whatever. But frankly, it’s just too many. It takes more luck than skill to survive long enough per spawn to enjoy that game.

CA PC Tune Up 2.0 - In the dark underworld of swag, those in the know are always on the lookout for trades. I had 2 of one my lesser items and when someone asked me about it, I told him I’d trade him for one of his multiple software bags. So I did. Now I can keep the new netbook safe from harm.

pogoplug - This is the runaway winner for swag of the day, even with the great start this morning. I know it’s pink, so let’s get the tittering out of the way right now. Their branding is pink so it’s what they went with for the first model (the black one is soon to ship). This was one of those items you really had to work for, and have a good affinity for the person who stands between you and the swag. In this case, it was the CEO of the company, a tremendously nice guy who I genuinely like. In fact, I liked him even before he gave me the pogoplug. Oh, so you want to know what it is? It’s your personal cloud, as the box says. You can share photos, music, whatever without an upload. Put the pogoplug onto your network and stick USB’s full of stuff into it. You can share to phones, other people, whatever. Plus it’s small.

More tomorrow as I spend the morning searching for great new technologies (and the trinkets people use to market them). 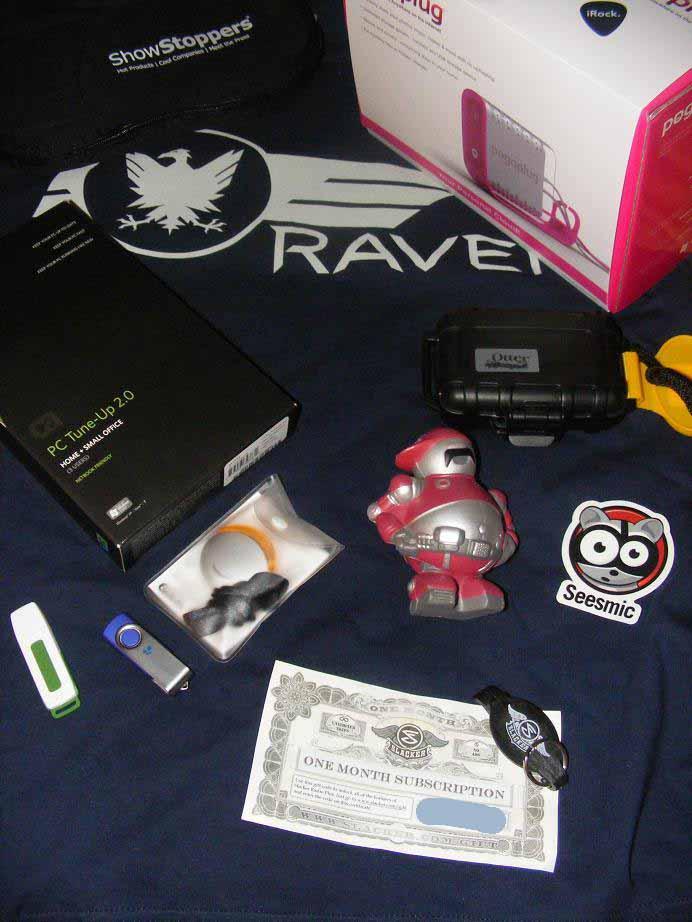