A couple of nuggets we picked up from the visit are that after calibrating the glasses, they should give three to three and a half hours of gameplay. There will be a software upgrade to 3.0 coming in the near future. This will also bring a visual overhaul for the product, as well as allowing for auto pull down of future updates.

Sean was the guinea pig as usual, and put on the AV920 and went to playing Crysis Warhead. Sean mentioned that one thing (besides the comfort, see below) is that in Crysis Warhead, he was actually seeing two guns when he went to scope. Otherwise, the image provided was pretty decent, but a unique experience.

Sean, who wears glasses, had a tough time getting the AV920 to fit well on his face once he tried them over his glasses. He didn’t have time to play with the nose pieces and adjust them to wear they needed to be for his comfort, but the Vuzix rep said (and showed us) that the nose pieces can be adjusted to a fairly broad array of angles to fit most peoples needs. 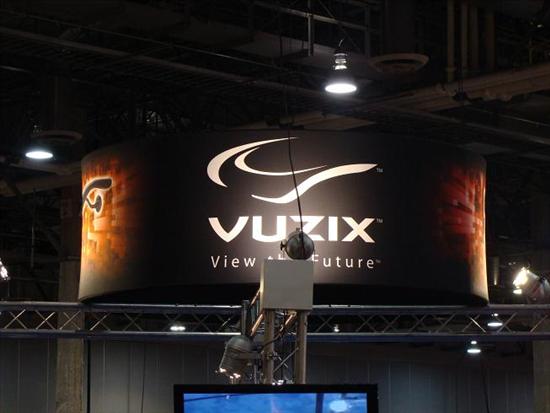