by: Dan - posted: 1/11/2009 12:49:00 AM
More On: CES 2009
Sean and I rolled into the Vizio exhibit space in the grand ballroom at The Wynne with different levels of anticipation. I have covered Vizio for the last couple years and have experienced their products before via review and hands on at last years CES. Sean on the other hand, was more of a skeptic having not really experienced any Vizio products except the base models carried by WalMart. After we left, he as extremely impressed with what we had seen.

We were treated to the full slate of Vizio TVs, audio gear and accessories that were announced earlier this week. These included the new XVT series TVs, the surround bar with wireless sub, Blu-Ray player and cables.

One of the coolest products was the Vizio “Connected HDTV”. The TV has a built in wired and 802.11n wireless connection that allows it to connect to the internet and use a plethora of widgets from Yahoo, stream movies direct from Netflix, Blockbuster Amazon or Pandora. It also has connections for Flickr and Rhapsody and a remote that contains a full slide out QWERTY with game controls to make interaction that much easier.

The most impressive Vizio TV was the 55” XVT LED LCD (VF551XVT1A) that features 240Hz refresh with the VIZIO Smooth Motion II technology, 1,000,000:1 dynamic contrast and five HDMI inputs. It also has an integrated surround bar with SRS TruSurround HD and TruVolume technologies incorporated. It is slated for a Summer 2009 release with a suggested MSRP of $1999.99.

We got a good look at the new Surround Bar and Wireless Subwoofer (VSB210WS). It has a great look and the sub is very solid. We hope to take a hands-on look at this when it becomes available in April with an MSRP of $349.99 with the sub and $199.99 without.

The accessory lineup was as impressive as the latest TVs, with the introduction of Vizio branded HDMI cables in sizes of three to 30 feet, wall mounts for flat panels for TVs from 13” to 60”, fiber optic cables and a surge protector system that fits inline with the rest of the home theater gear. Out of this batch, the HDMI cable pricing was the most surprising, as your normal retail price of an 8’ HDMI cable is around $75. Vizio will be marketing their 8’ cables with and MSRP of $49.99, basically kicking don the door on pricing structure of these cables. In fact, all of their accessories will have MSRP that are below what current comparable products are priced at on retail shelves. Should be interesting to see how the market reacts.

The last product we looked at was the new Vizio Blu-Ray player. It is made specifically for Vizio and is coated in a high-gloss piano black with a blue light and silver disc tray and gold Vizio logo. The VBR100 is scheduled to hit retail in April 2009 with a MSRP of $199.99.

In our estimation, Vizio had a fantastic lineup of TVs, with a killer selection of accessories and one of the most innovative products we have seen on the floor with the slide out remote with full Qwerty for their interactive TV line. The biggest hit though was the 55” XVT LED that will retail for under $2000. Check out all the shots we took at the Vizio meeting after the break. 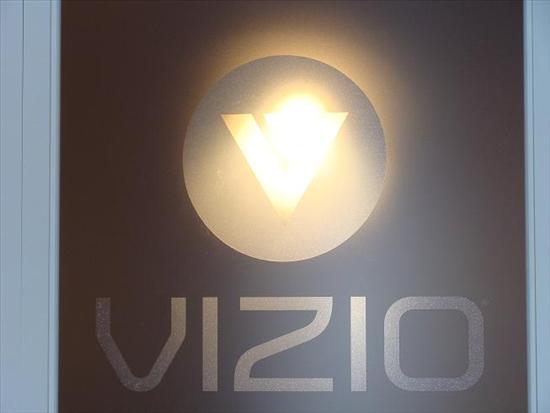