Batgirl possibly outed for Injustice: Gods Among Us DLC

A couple of weeks ago, someone on the Gamespot forums posted that they had discovered the names of the four DLC characters. Listed were Batgirl, Zod and Scorpion from Mortal Kombat. I frequent a lot of fighting game and Mortal Kombat fansites and let me tell you, the response to these characters has been pretty negative.

To make matters worse for those hoping this list was false, it seems that someone accidentally let the cat out of the bag early on the next DLC character for Injustice today. Spotted at the Eventhub.com forums, "Batgirl" accidentally showed up on the Xbox Live marketplace today for free. Although you could download the character it you would get an error once it reached 100%. In any case, I would say that there is a good chance that Batgirl is coming to Injustice soon and that the leaked list of DLC characters is real.

Of course, I'd love to try out and see the characters in action before forming an opinion. That being said, I also find this list rather disappointing. There is such a small number of female characters in this game that I was hoping we would get more than one as DLC and something that wasn't just Batgirl. Black Canary, Power Girl, Poison Ivy and the list better choices goes on and on. Zod actually makes sense since he is the villain in Man Of Steel, which is coming out this Summer, and I would assume they would want to cross promote that.

Finally, as much as I love Mortal Kombat, I loathe the idea of Scorpion in this game. I already cleansed my mind of the atrocity that was Mortal Kombat vs. DC Universe and I don't want to be reminded of that. Plus his inclusion makes no sense in terms of the storyline. How are they going to explain Scorpions inclusion in the DC Universe now? 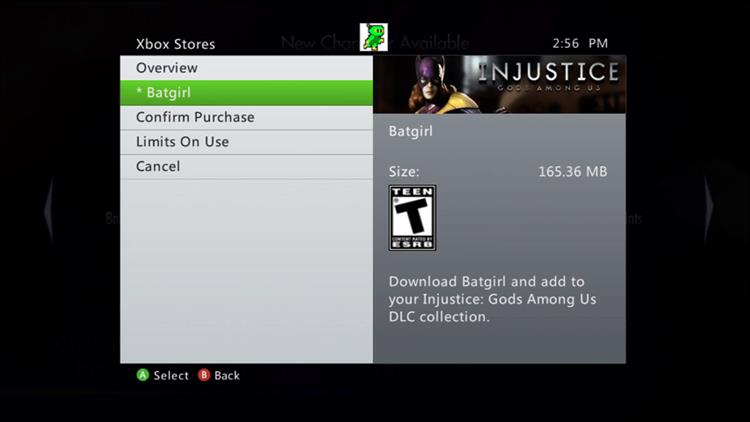