by: Randy - posted: 6/14/2008 11:07:00 AM
More On: LEGO Batman
After producing pictorials for Mr. Freeze, Scarecrow, as well as Batman and Robin's powersuits, Warner Bros. Interactive Entertainment recently uncloaked hero Nightwing, along with two new villians, Clayface and Bane, from upcoming LEGO Batman: The Videogame.  We've got pics and short bios for this newly-unveiled trio. 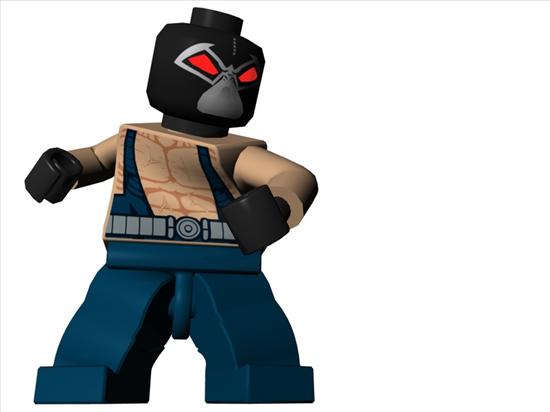 Born a prisoner for crimes committed by his father, the child who would become Bane survived cruel solitary confinement in a Santa Prisca prison.  During his long lonely years, he developed incredible powers of concentration, and, once released into the prison population, studied every book he could get his hands on.  After nearly four decades of imprisonment, he was chosen for a military experiment with the drug Venom, which greatly enhanced his strength.  Escaping, he sought out Batman to prove himself to the world by destroying the greatest specimen of mankind.  Bane broke Batman, but the Dark Knight went on to recover and defeat Bane.

In LEGO Batman: The Videogame, Bane has the ability to pass through toxic gases unharmed as well as super strength, which allows him to carry and throw huge objects.

Initially an actor in horror films, Karlo went mad when he learned a classic film of his was to be remade.  He donned the mask of the film’s villain, Clayface, and killed several of the remake’s cast and crew before being stopped by Batman and Robin.  Later, Karlo joined a collection of villains who subsequently used the name Clayface in an alliance that came to be known as the Mud Pack.  While that group was defeated, Karlo tricked his allies, injecting himself with the essences of several of them, becoming a superhuman imbued with the abilities to change shape, melt others into protoplasm with a touch, and mimic the powers of heroes or villains he copies.

After his circus aerialist parents were murdered by criminals, young Dick Grayson was adopted by Bruce Wayne, becoming his ward...and his partner in the war against crime as Batman's sidekick, Robin.  Years later, Robin struck out on his own as Nightwing and now lives in the corruption ridden city of where by day he serves as a member of that city's police department...and patrols its streets by night as Nightwing.

·         Trained in stealth and espionage techniques

In LEGO Batman: The Videogame, Nightwing is a bonus character, he can also utilize all of Robin’s technology suits.