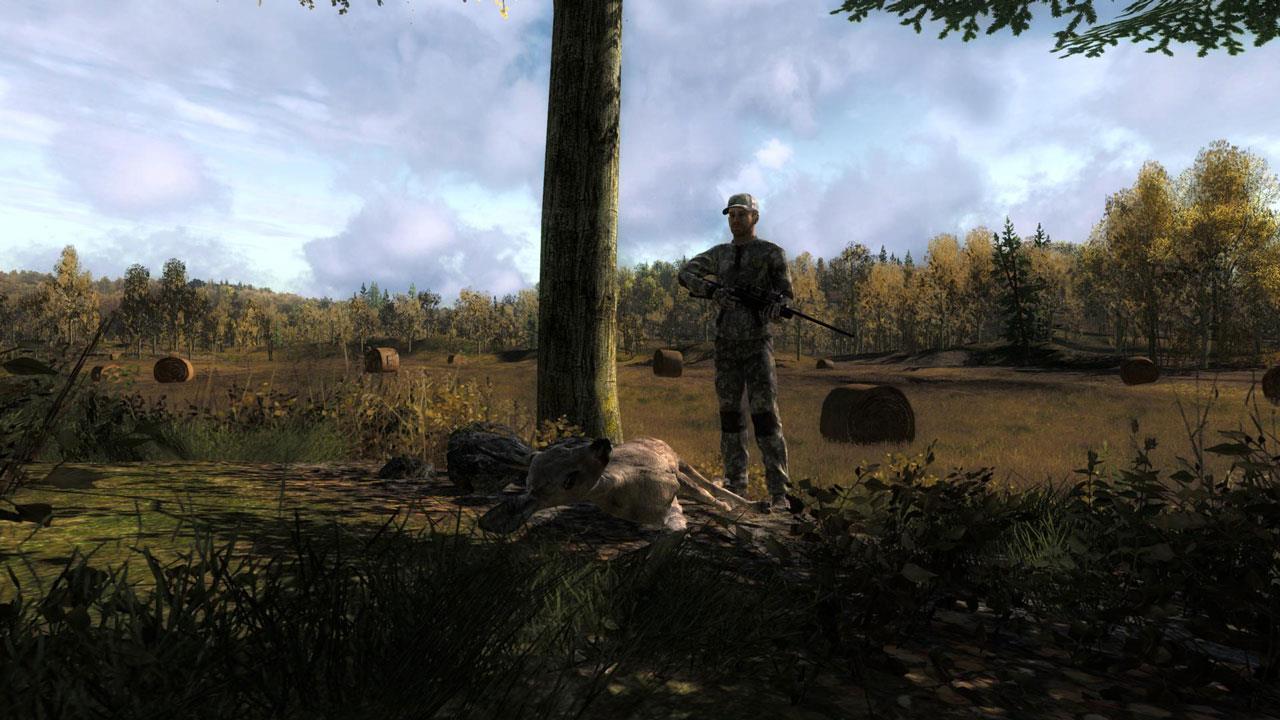 The Hunter, or known as theHunter, from Expansive Worlds and Avalanche Studios is a free-to-play simulation game in which players are tasked with tracking and hunting a variety of animal species from deer and fox to bear and moose. Set throughout various hunting reserves modeled after locales in Washington State, players begin each game at a lodge and are then given complete freedom to travel anywhere on the expansive maps searching for their next prey. The game contains both single-player and multiplayer modes, the latter of which allows for a total of eight friends or strangers to cooperatively hunt online. While the game is free-to-play in nature, a majority of the features or additional hunting items require the purchase of a 3, 6, or 12 month membership subscription.

There are an assortment of missions available to players that reward the game's non-premium currency which in turn can buy additional ammo and other helpful hunting items such as lures and baits. Premium members on the other hand have unlimited access to the standard type of ammo for their weapons making the missions seemingly-unnecessary. Aside from the hunting missions that serve as extended tutorials and introductions to the game's various species, players can create single or multiplayer games in which they select both a starting reserve and lodge. In regards to equipment, players can change their loadout at lodges scattered around reserves or if they have purchased a tent. Loadouts consist of weapons ranging from rifles and pistols to crossbows and shotguns, in addition to scopes and ammo types. Since the game focuses on realism, players need to use proper weaponry while hunting specific species. Other equipment players can bring along in their loadouts include backpacks, tree stands, tents, binoculars, and other such hunting items.

The actual gameplay experience of hunting focuses on realism in that players must keep in mind all the elements of movement through the environment including both sight and sound. Players can track animals by following tracks found in the environment as well as sounds heard through their GPS system. Properly tracking and then getting a clean kill without letting the animal suffer results in more points than ignoring the rules. Those players looking for a quick satisfaction of finding and hunting an animal in a few minutes will be disappointed as The Hunter favors patience above all else. The gameplay of The Hunter will either be loved or hated solely dependent upon the type of player. The fact alone that The Hunter focuses on realism over an arcade shooter experience was a welcome relief as its near impossible to find a modern hunting game that isn't a rail shooter or cheap cash-in on the genre. From tracking an animal through various hills and woods to the final deadly shot is a highly-rewarding experience that isn't found in other free-to-play games.

The added multiplayer component is even more entertaining and rewarding as hunting alongside a friend adds a whole new element to the experience. While the game doesn't include built-in voice chat, it's recommended to run a separate audio chat program for easier communication of animal location, strategies, and other such hunting discussion. Once players have tracked and killed an animal, they can proceed to capture trophy shots which in turn can be saved to their profile or transferred to social networks. There isn't any other game that offers players the ability to pose alongside each other next to their prized animal kill and for some odd reason, it's highly-rewarding. As with other games such as Battlefield 4, players launch the game through their web browser in addition to viewing their profile and partaking in ongoing hunting competitions. While the game can be kept a completely solo experience unlike other free-to-play games, it's highly-recommended to convince a friend to join along for hunts. 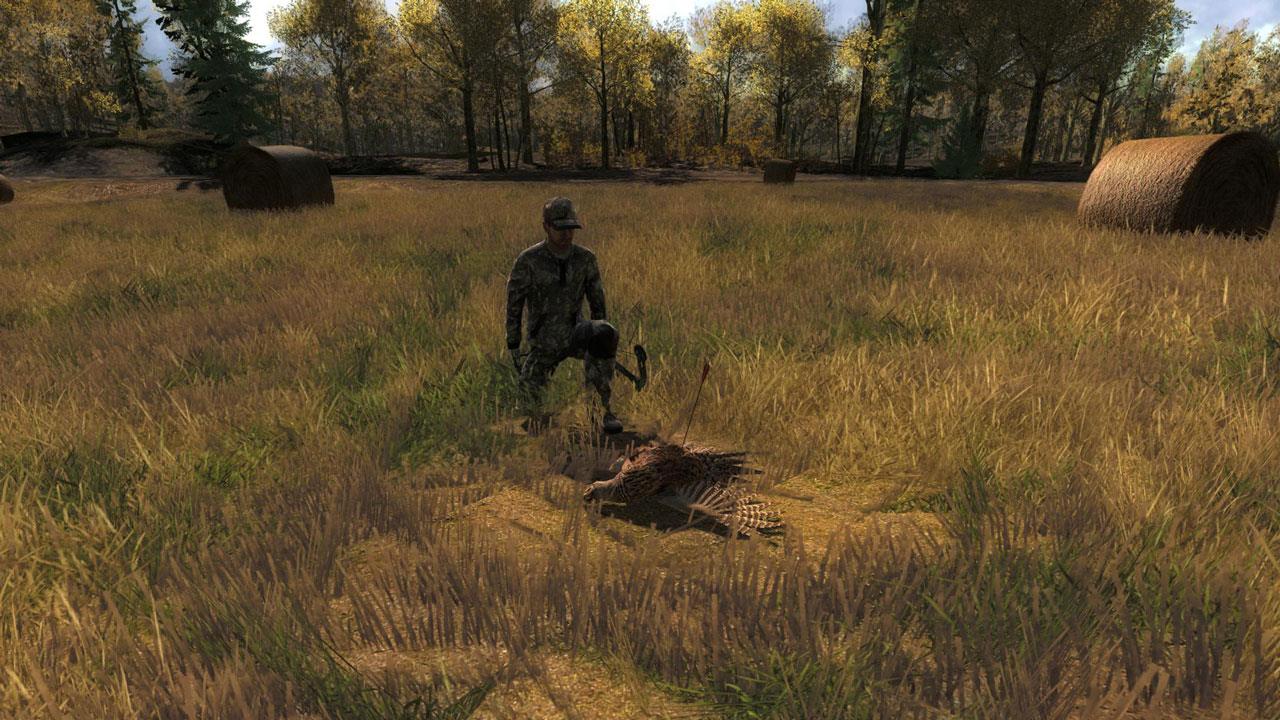 Stepping forth from other hunting games on the market not only in terms of realism is the additional focus on an atmospheric environment that is nearly-always breathtaking. Players can set the time of day for their hunts which result in stunning sun glare or overcast clouds that make for a realistic atmosphere. The game also includes a day and night cycle that changes during gameplay as well as random weather including rain and fog. The Hunter is without doubt one of the most visually impressive free-to-play games to date. The auditory experience mirrors the visuals with realistic animal calls in addition to atmospheric wind breezes and rain drops hitting the ground during overcast weather. The only downside with the game's presentation is the lacking draw distance that results in barren environments while looking through scopes or binoculars. These brief moments draw players out of the game's overall atmospheric environments.

While the gameplay of The Hunter is both highly-entertaining and rewarding, it unfortunately suffers from a heavy emphasis on premium memberships and hunting items. Starter bundles do help beginning players with providing them the necessary equipment for basic hunts, yet players that decide against any type of payment only have access to one the game's hunting reserves and limited equipment. It's a difficult investment for players with little interest in hunting, but those who do will find a great deal of worthwhile content. While other free-to-play games offer more content to beginning players, The Hunter is unique in that it's the only title that focuses on realistic hunting. The Hunter is undoubtedly a niche free-to-play game in a crowded market of role-playing and shooter titles. For those players that do make the investment wont be disappointed as its clear the developers care strongly for the game and its development. While The Hunter may not be for everyone with its emphasis on premium memberships, it does provide one of the more unique and rewarding gameplay experiences among free-to-play games.

The Hunter is one of the more unique free-to-play games on the market with its focus on hunting realism. While the game's single-player mode is entertaining, the multiplayer component is even more so when playing alongside a friend or group of strangers. The complete experience of tracking and hunting an animal is highly-rewarding and simply not found in other games. Even with the game's emphasis on premium memberships and items, it's still a worthwhile investment for those that enjoy hunting and have been looking for a realistic video game experience. Yet, those on the fence can still give the game a try and decide if they have the patience to track and hunt an animal. For those considering the game, it's highly recommended to bring along a friend on their hunting adventures to make for an even more entertaining and rewarding gameplay experience.