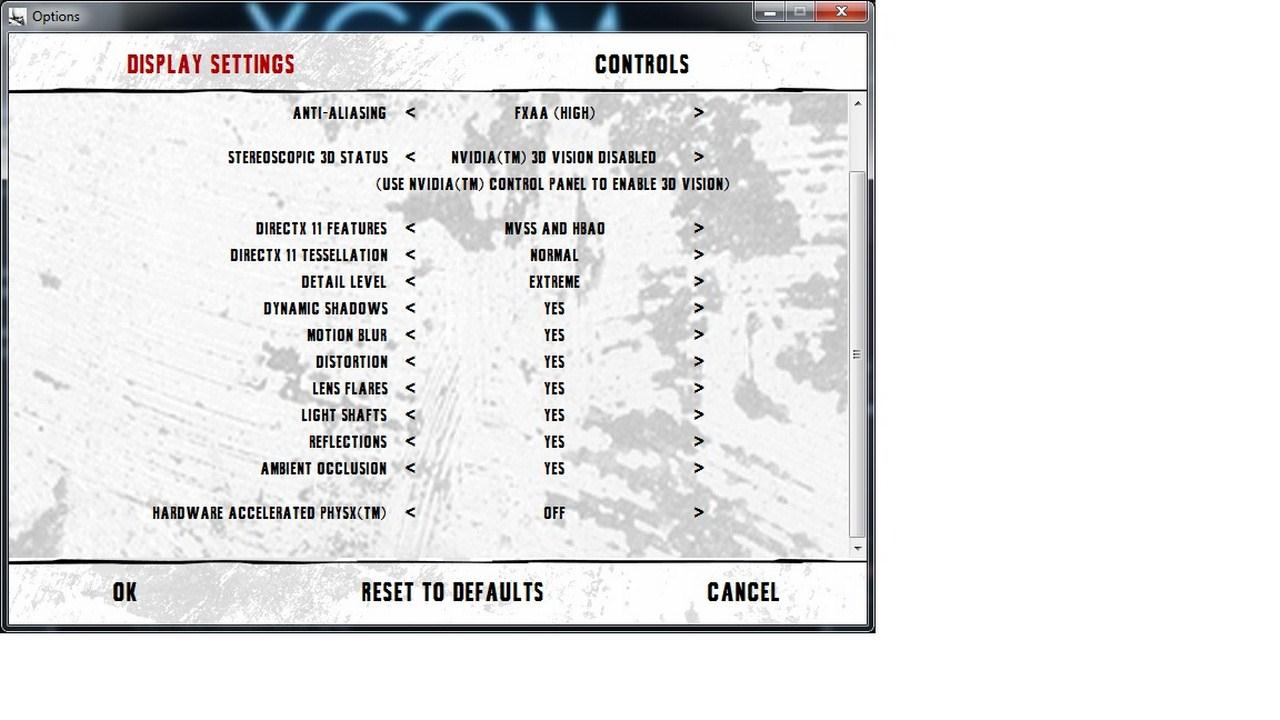 Written by John Yan on 9/13/2012 for PC
More On: GeForce GTX 660
When Kepler was introduced a few months ago, it was understandably only available on the high end video cards that were priced to all but the most hardcore PC gamer. That's usually the case when a company introduces new technologies. Well, the time has come for a more affordable Kepler based card and today NVIDIA and their board partners are releasing the GeForce GTX 660 and the GeForce GTX 650. What we have here today due to the generosity of NVIDIA and eVGA is the GeForce GTX 660.

The GeForce GTX 660 is using a new GPU titled GK106. You can see the architecture of the GK106 below. 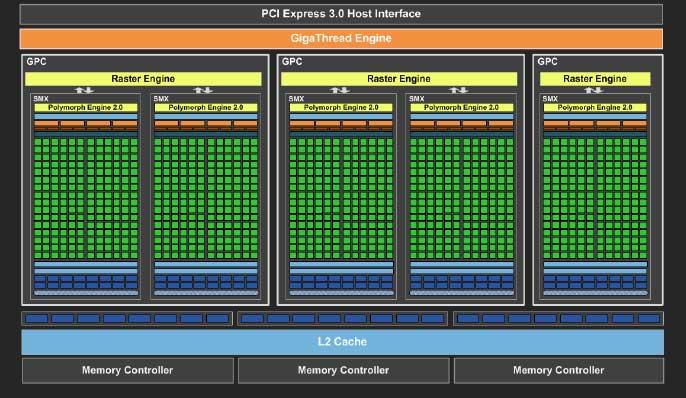 Now the card has all the features that you've come to know from the launch of Kepler in the GeForce GTX 680 card. SMX units, five in the GTX 660, give you 960 CUDA cores and 80 texture units. SMX was designed for more processing power while also consuming less power than previous generation DX11 GPUs. The full specifications is outlined below. 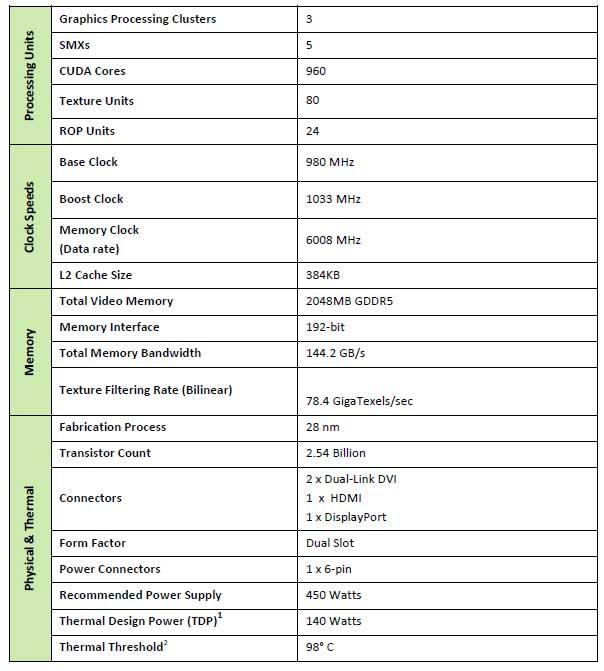 Another feature touted in Kepler has been GPU Boost. While the video card runs at a base clock speed, GPU Boost will automatically kick it a little further when doing graphically intensive tasks. Base clock for the GTX 660 is 980MHz. Now, once you fire up some games, it can boost up to an average of 1033MHz, giving you a 5% increase. 1033MHz isn't the top end as it can go a wee bit higher, but that's the average as documented by NVIDIA. There's still even more headroom so expect some cards from other board partners that are overclocked out of the box and this is what we have here with eVGA's card. The base clock out of the box is 1046MHz and the average boosted clock speed is 1111MHz. That's a nice little gain from the reference specifications that NVIDIA has.

For memory, the eVGA GeForce GTX 660 comes in 2GB or 3GB and we have the 2GB configuration here. Memory speed is rated at 6008MHz, which matches the reference specs and you get a bandwidth of 144.19GB/s. 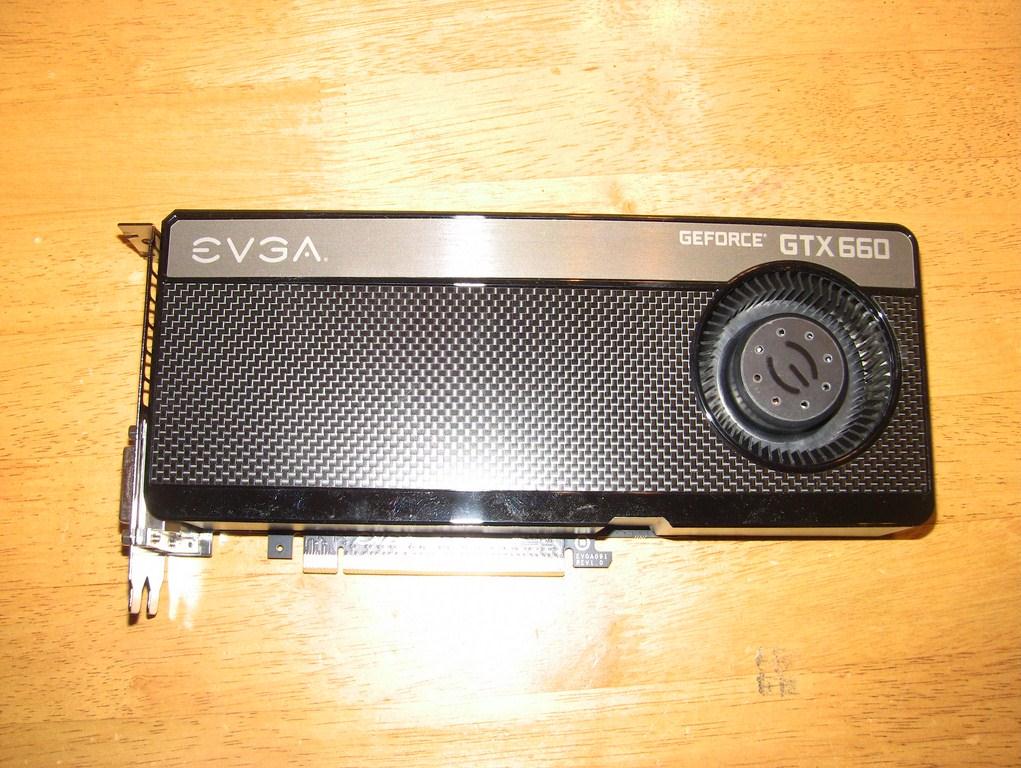 As far as the physical features of the card the eVGA card is 9.5" long and contains two Dual-Link DVI ports, one HDMI port, and one DisplayPort. The whole card is enclosed in a casing and there's one single 6-pin power port at the top to power the card. Also at the top is a single SLI connector allowing you to connect one other GeForce GTX 660 card for SLI performance.

The card runs pretty quiet in my enclosed system, even when on full load from various games. I have some pretty quiet fans running in my setup currently and the GeForce GTX 660 Superclocked didn’t seem audible at all when running, which is great if you’re looking for a quiet system to build.


Adaptive V-Sync is a feature that helps smooth video performance and is available for other cards than just Kepler based ones. People run V-Sync to try and get as smooth of a picture as possible and to eliminate tearing during motion. Sometimes though, the frames per second fall below the 60Hz of a monitor and then you’ll get jittering. With adaptive V-Sync , V-Sync will turn off when it falls below the threshold and turn back on when it goes above it, producing a smoother all around picture, as demonstrated by NVIDIA’s video.


As I don’t have a competitor card to test against, I do have on hand a card that’s pretty popular on Steam right now. NVIDIA’s GeForce 9800 GT is still in use well over four years since its launch, so we’re going to test how much of an improvement over that card should you decide to upgrade to the GeForce GTX 660. It’s definitely not an apples to apples comparison, just what you can expect if you upgrade to a popular card being used today/

I’m going to run through various types of games from fighting to action to strategy, just to give a broad scope of titles. I’ve also thrown a synthetic benchmark in there for those interested in Unigen Heaven. All tests were run at least three times and then an average was taken and displayed in the graph below. If you're interested to see what I had in my settings for some of the games, they are included in the screenshots at the end of the article. 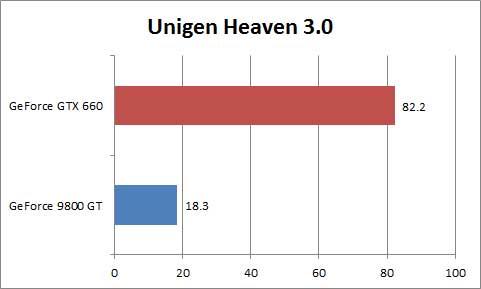 Battlefield III - For Battlefield 3, I ran through the first part of the Uprising mission and used FRAPS to benchmark the game. 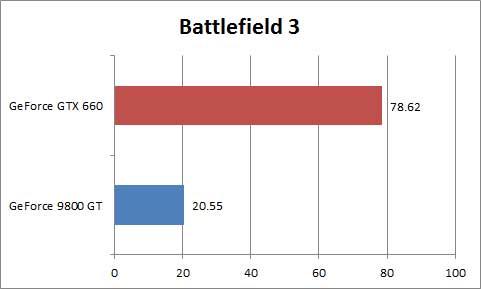 Batman: Arkham City - I used the built in benchmark. 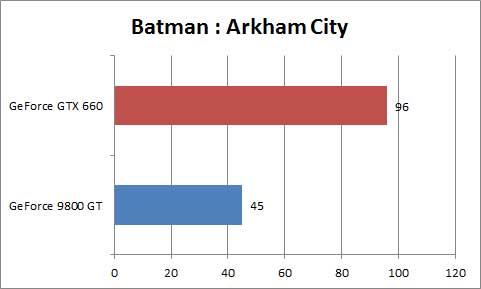 Diablo III - I ran the very beginning of Act I before going into town as that was one of the few parts of the game that doesn’t change and recorded the results using FRAPS. 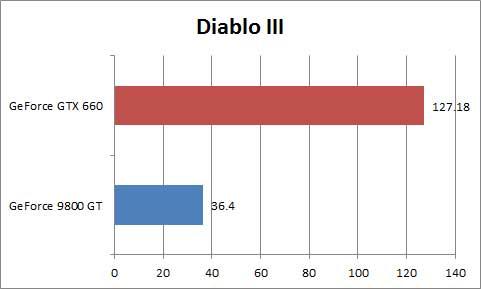 The Elder Scrolls V: Skyrim - In Riften, I ran around the area taking the same path each time I tested while using FRAPS to benchmark the game. 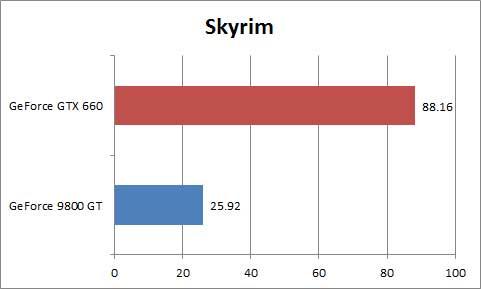 Max Payne 3 - I loaded up Chapter III and played through the beginning five minutes while running FRAPS. 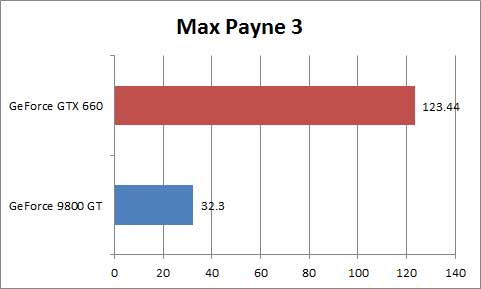 Sid Meier’s Civilization V - Here I also used the built in benchmark and used FRAPS as well to get an average FPS. I selected the DX10/DX11 version. 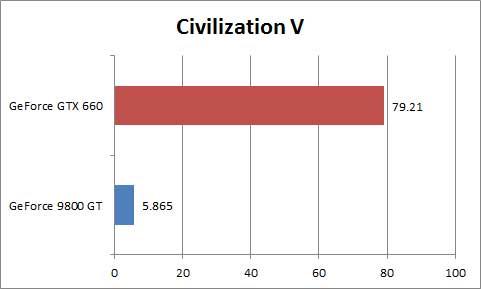 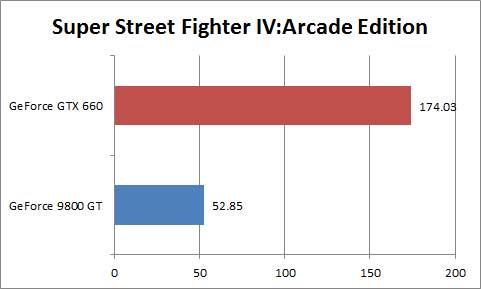 Warhammer 40K: Dawn of War II - Again, I used the built in benchmark. 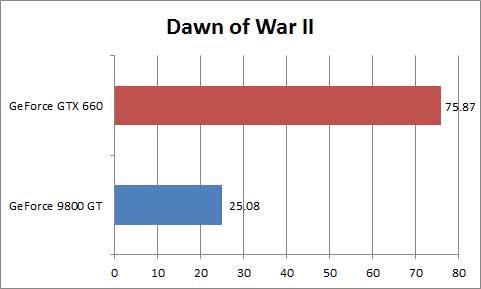 You can see just how much an improvement, performance wise if you are using an older GeForce card compared to the the GeForce GTX 660. And, you’ll benefit from getting all the features of a DirectX 11 card as well as some Kepler specific features like TXAA. But, the fact is there’s a lot of power in this nicely priced card to let you game at 1920x1080 with high settings throughout. You can see that all the games are running at more than you need in terms of getting smooth gameplay and there’s some wiggle room to up the settings in some of the games tested. Also, the card uses less power in its class and performs better so you’re getting great performance without using as much power.

Let me also impart on those interested in a GeForce GTX 660 and are wondering what brand to pick up. eVGA, who provided this card to us by the way, has a three year warranty, which can be upgraded to five or ten when you register your card. Now this covers the product, so if the card changes ownership, the new owner will still be able to get service if the card is still in warranty. It’s a pretty good deal and one of the reasons I recommend the eVGA line of products. 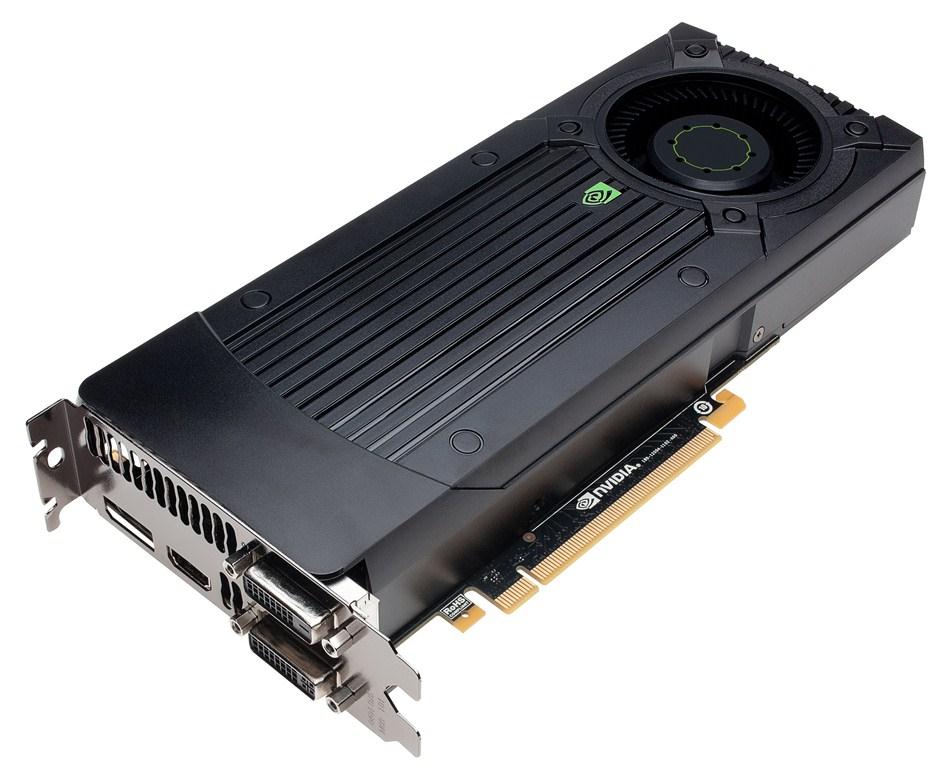 With that said, the GeForce GTX 660 is a great performing mid range card. It’s made for gaming at high levels at 1920x1080 resolution and it does so with room to spare. I was surprised at how well the card did perform across the gamut of games I ran through. The eVGA GeForce GTX 660 Superclocked runs at $229.00, which is the same price as normal clocked cards giving you great value for the money. If you’re a few generations behind and are looking for a good card to upgrade to, you can’t go wrong with eVGA’s version of the GeForce GTX 660. Priced well and performing great, the GeForce GTX 660 brings Kepler to more folks than before and combined with their GeForce GTX 650 line of cards, almost anyone can get into the game with Kepler now.

For the price you pay, you're getting a card that will let you play many games in high or higher settings at a smooth framerate. NVIDIA specific features such as 3D Vision, PhysX, and TXAA will also give you a really great experience. eVGA's card is fantastic and overclocked out of the box with the same price as the regular clocked card. Backed by a great warranty, this card shines in both performance and affordability.