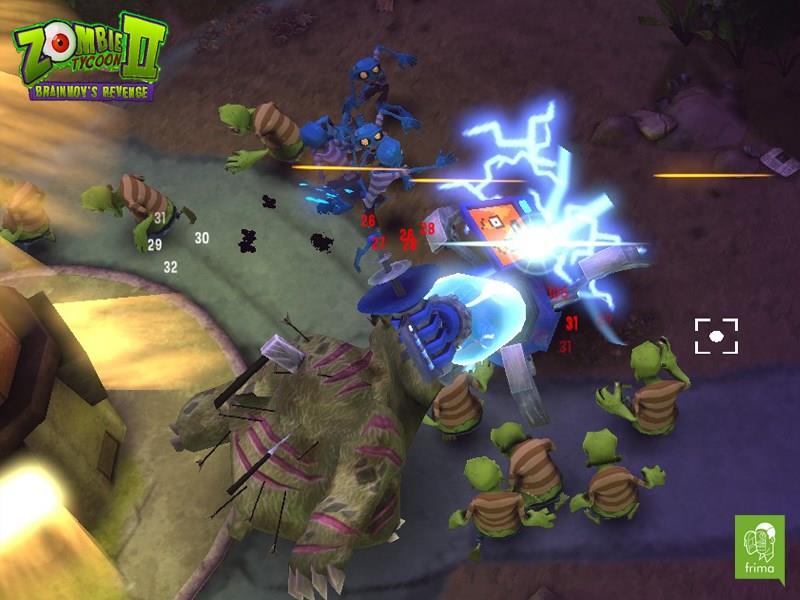 Written by Nathan Carter on 5/17/2013 for PS3
More On: Zombie Tycoon 2
Real Time Strategy games have never really been my thing. Using a mouse and keyboard to constantly click and command my squads around the map to gather resources and explore the map, and then before I know it, I look back and my base is being destroyed. RTS games haven’t really translated well to consoles either. Some have tried but with the amount of squads and other things you have to manage you almost need a mouse and keyboard to quickly select and move your squads. In comes Zombie Tycoon 2 a RTS game for PS3 and Vita built from the ground up and has taken the complex RTS genre and has simplified it into an extremely fun game that anyone can enjoy.

Orville Tycoon whom is raising his raising an army of zombies is at war with his former mentor Archibald Brainhov who is raising his own army of zombies and monsters. The story plays out with cut scenes before each chapter. The chapters play out much like most RTS single player campaigns do with you having to complete a certain number of objectives. It’s fun for the most part although I did run into a few problems. One objective I had was to get engineers to activate certain items on the map. I had the engineers but the item wouldn’t activate no matter what I did. I’m assuming it was a glitch because once I restarted the chapter I could easily activate it with no problems.

Unfortunately the single player mode doesn’t last very long and almost acts as an extended tutorial. There are only eight chapters and each is about a half hour long. The single player is fun, but it’s not something that you’ll be coming back to if you finish it. The reason I say, “if you finish it” is because that towards the end the difficulty spikes to ridiculous levels. Sure there is a checkpoint system that you can start at if you fail though unfortunately the health of your mobile spawner does not regain its health even if you start over at a checkpoint. Your best bet is to just restart the chapter over again.

The meat and potatoes of Zombie Tycoon 2 and the reason you’ll want to buy this game, is in multiplayer mode which is extremely fun. You can play as either Orville Tycoon or his nemesis Brainhov. You also select which monster you want to use which acts as a MOBA like character with cool down on skills that can help turn the tide in your favor late game. Aside from the monsters, there is no real difference between Tycoon and Brainhov besides for the fact that Tycoon’s zombies are green and Brainhov’s are blue. The monster characters are all wacky in their own way such as giant bears, badgers, machines with brains and giant blobs. They each have their own abilities that are vital to success. Bearhug can swipe at enemies causing massive damage, Braintrust shield his allies, Badgerker deals more damage as he loses health and Skidmark can gobble up units and fart out gas that deals damage. I personally live using Braintrust as he can shield his allies but also has the ability to recon ahead to see areas you haven't discovered so its a useful tool to see if enemies are coming your way or not. 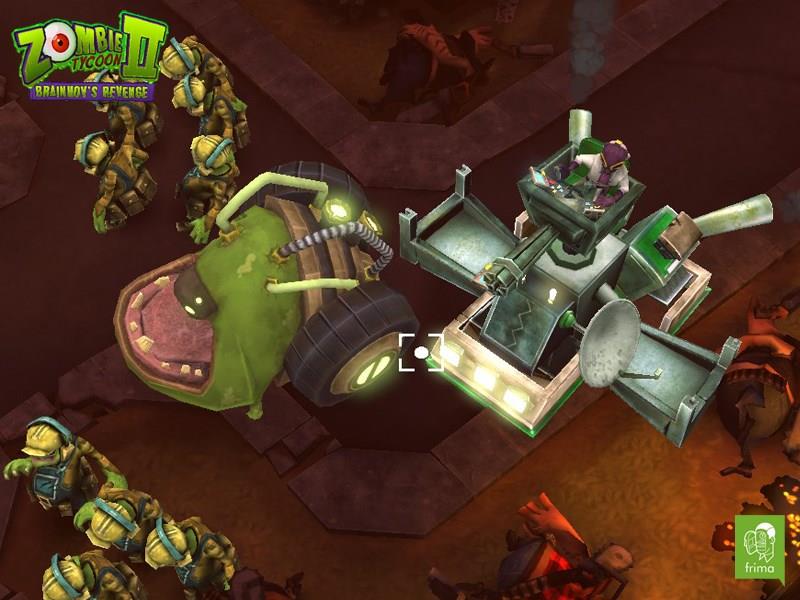 There is only one map for multiplayer and both players will find themselves at opposite ends of said map at the beginning of each game. Capturing houses will grant you more zombies that can be used for your dead rush. More on the dead rush later. There are also giant buildings that take longer to capture and will defend themselves against attacks. These buildings are useful however as they can be used to upgrade your zombie squads into more powerful units such as engineers or samurai squads. The goal of each game is simple. Destroy your opponent’s mobile spawner. The mobile spawner is a very vital part of your squad as well. When deployed, your spawner will spawn zombies for you and also has a mounted mini gun which can be used to help take over buildings and attack enemies as well. Personally I like to keep my mobile spawner away from the action so I can spawn zombies, pick off buildings and enemies with the machine gun and be able to get away quickly if I see enemies coming towards me. Your zombies all have a simple attack so it’s good to send them into a group of enemies if you see that they are smaller in numbers than you. You won’t see your enemy right away however as the game implies a fog system where only parts of the map you have been to can be seen so you always need to be on your toes because you never know when you will run Into your opponent.

Taking over buildings will gain you more zombies that will hang around the map, slowly taking smaller buildings and fending off enemies that may come by. They also have another function. As I mentioned before, each building you take will earn you zombies. If you press the R1 button (R button on the Vita) you will activate the dead rush. When this happens all of your roaming zombies will all converge into one location you tell them to attack for 60 seconds. This becomes extremely useful if you see your opponent coming straight after you. 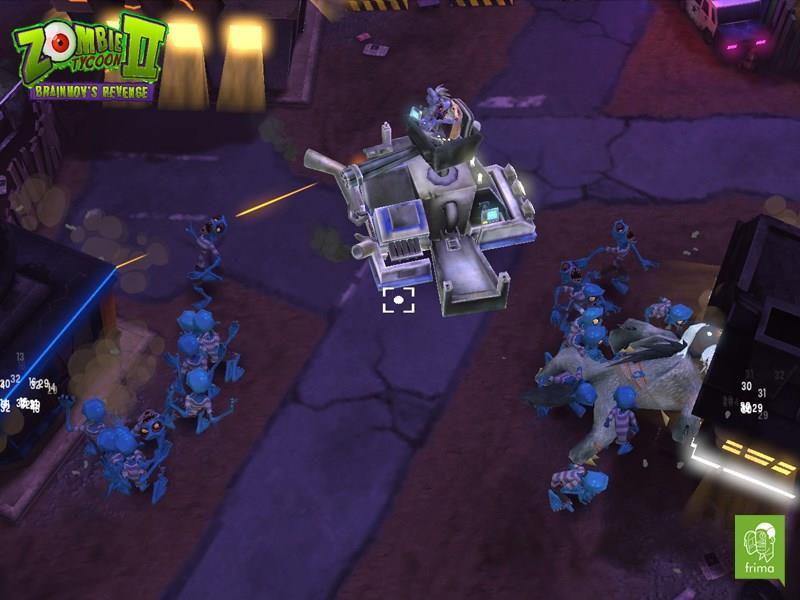 Online games are extremely fun though there does seem to be one problem I kept running into. Almost all of my games ended within 10 minutes or so. This isn’t a bad thing however your monster character has four different skills. They start with one and gain more overtime. I feel like everything in this game would use a huge buff in terms of total health because games end so quickly that I have never been able to earn more than a second skill for my monster character. Now don’t get me wrong the game is fun but I feel like games should be lasting longer than they are. I fell like if they bumped up how much health each unit and building has it could extend the games longer. On the plus side, the games are back and forth battles so even though the game is an RTS it does have a bit of a MOBA feel to it as well especially when both teams start battling for position in the middle of the map and buildings constantly start shifting between teams.

This game also utilizes Sony’s amazing cross buy, cross play and cross save features. Buy it once for PS3 or Vita, get both versions, play online and with friends between both versions and save your game on one device and start playing on another. I’m happy to say that both versions of the game are pretty identical to each other with the only issues being that the Vita version does sacrifice some of the visuals and the frame rate, while still playable isn’t as good as it is on the PS3. I actually prefer to play on Vita because this is the perfect portable game that is fun to play around the house or chilling in bed.
Speaking of the visuals they are very good as well. The cartoon style of the characters and the stages makes for a very charming and humorous experience and a nice change of pace from most zombie games released today which are all dark and gritty. In terms of music you also have some appropriate music that goes with the theme of the game. The only problem with this is that there is very little music in the game so you will be hearing the same tracks over and over again especially during online play.

It may sound like Zombie Tycoon 2 doesn’t pack in tons of features but that’s perfectly fine. For only $10 (or free if you are a Playstation Plus subscriber) you get plenty of fun. Frima Studios did a great job of bringing the RTS genre to the home consoles and I am very excited to see what’s in the future for the Zombie Tycoon series. Everything that makes the RTS genre so great is simplified down into a charming, fun and easy to play package for home consoles.
Zombie Tycoon 2 may not have much in terms of a single player experience but what it does have is a very fun and a very strategic RTS multiplayer experience that anyone, even those who aren't fans of RTS games can enjoy.