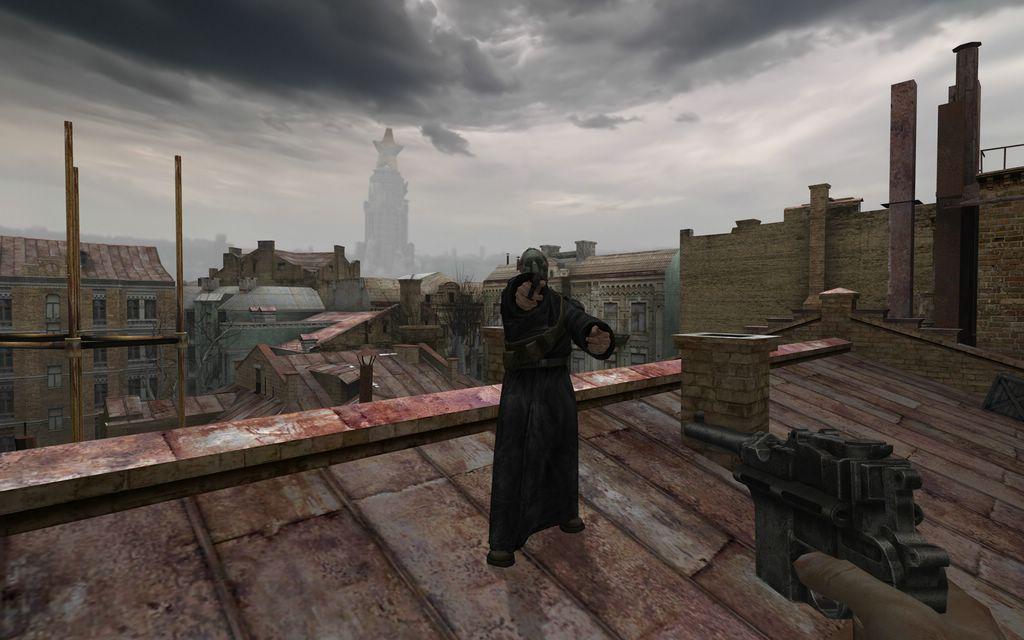 Written by Sean Colleli on 11/20/2007 for PC
More On: You Are Empty
My first impressions of You Are Empty were that it was average at most. The first ten or so minutes of Digital Spray’s new shooter felt like your typical zombie killer. All hell had broken loose, the population had been transformed into mindless maniacs, and the only way out was through. In many ways, it reminded me of Half-Life 2.

You Are Empty is also one of the best examples of how first impressions aren’t always the most important. Once I got into the game proper, I realized it was much more than the latest Half-Life clone. I previewed You Are Empty a while ago and really enjoyed it, and while the final build is virtually unchanged, it’s still a surprisingly fun game.

The premise is the first thing that looks boilerplate on the surface, but has a lot more nuance than you’d expect. Yes, it is the standard kill the zombies excuse, but with some creative spice. The game isn’t just another post-apocalyptic vision of the future, but an image of a potential past. It takes place in 1950’s Russia, where communism has begun to spread throughout the world and the zombifying experiment gone wrong was an attempt to cement the hold of Marxist philosophy. The story stays somewhat ambiguous throughout the game and only toward the end do you get the whole picture.

So, it has a rather creative take on a stale formula. So what’s so special about it? To sum it up in one word, I’d say art.

Digital Spray is based in Russia and the hometown influence is quite apparent. Every aspect of the environments is uncannily realistic; You Are Empty somehow avoids the hackneyed “video game” feel that plagues so many other so-called realistic shooters. Wandering the desolate, crumbling streets of 1950’s Russia evoked a sense of loneliness and isolation I haven’t felt in a game for years. Propaganda posters were plastered across the walls. Patriotic tunes, marred by static, played on the occasional radio. Everywhere, there were the signs of a society in collapse. It reminded me of the opening scenes of 28 Days Later, where the main character walks the abandoned, dilapidated streets of London. Resident Evil 4’s dingy village is also a good comparison.

At one point I was making my way through a hazardous factory, fending off the attacks of cybernetically enhanced steelworkers. I made it to the roof, where I had a great view of the surrounding countryside. Soot and ash blew in the wind, and the sun bled through the overcast sky. In the distance was a tall building, its face torn away, exposing jagged brick, mortar and girders. Striking scenery to be sure, but I actually got to explore that building, and look out from the bombed out rooms I had seen from the outside. Nearly every location in the game has this attention to detail and emotional impact.

And the kicker? All of this artistry is done without a scrap of shading. There isn’t an ounce of bump mapping, normal embossing or parallax effects on any of the environments. There isn’t even any bloom lighting. It’s all done with good old fashioned polygons and flat texture maps. In some ways, You Are Empty is more chilling and evocative than Half Life 2 ever was. Even the cutscenes are done very tastefully; they look like some kind of stark European art film, with a shaky animation style and eccentric directing. As I mentioned, they tell the story but keep it mysterious up to the end. There’s something to be said about putting your home country experience into your art, and Digital Spray has done a spectacular job. I can only imagine how I would feel if a twisted game designer made a creepy version of Columbus Ohio.

In many ways, the visual style of You Are Empty saves it from being mediocre. The shooting mechanics, while solid, aren’t revolutionary. You collect a series of pretty standard firearms, from a Mauser pistol to a sniper rifle. Molotov cocktails serve as grenades and there’s a strange sci-fi weapon thrown in for good measure. In particular, I liked the nail gun they included—it felt very industrial, very Soviet, in a workman’s tool kind of way. Oddly enough, there’s no AK-47, but instead a PPsh; a distinctly Russian period gun to be sure, but not as iconic as the Kalashnikov. All of the guns are fairly accurate and have secondary features, most of which are just precision aiming modes. On the whole the guns work well, and their accurate appearance and function add to the atmosphere.

The actual shooting works well enough, but has a loose feeling to it. I can only describe it as “mod-like,” as if the developers didn’t quite have a full hand on the engine. A few more examples of this amateurish feeling are the occasional clipping bugs, a bit of close range pop-up and the ridiculous falling damage. A fall of about eight feet will take almost half of your health, which makes the few ladders in the game a bit of a quick-load chore. These shortcomings are understandable, considering Digital Spray developed the engine in-house and this is their first game using it. On the bright side, the game has a solid physics engine for ragdoll and environmental effects, which seldom glitched up.The game has one other issue that will either infuriate you or leave you nonplussed. You Are Empty differs from most shooters in its pacing—you might only fight a few enemies at a time, but their accuracy and damage make the battles tense anyway (in some ways it reminded me of Doom 3). To streamline this pacing, the developers gave the player character an uncommonly slow walking speed. You practically stroll through the levels, without the ability to sprint, run or otherwise increase your speed. I have a feeling this was done to get the player to slow down and admire the scenery—it’s certainly gorgeous in a stark, haunting way, but I still would’ve like to move a little faster.

Persian flaws aside, the enemy designs are what do the most to throw of off the game’s ambiance. Some of them are great, while others come off as cheesy. Several of the enemies look like they’ve been experimented on—they’ll be missing a chunk of a limb, exposing bare bone that is supported in metal framework. Others, however, are decidedly less frightening. The first level, a hospital, is a good example. At first you’ll be fending off gibbering madmen with your wrench, but other times you’ll be fighting comically well endowed zombie nurses. There are also random crazed citizens wielding guns and tools, so you get the sense that average people have been transformed. The enemies will also fight among themselves, and oftentimes I came across a small battle already in progress. A few of the scripted situations you find these enemies in are downright creepy, and Digital Spray has been creative in how they portray the AI. The baddies aren’t terribly smart, but they are fast and accurate with their weapons.

The problem is that half of these average-Joe enemies look downright goofy—guys in floppy hats, giant turkeys—and they have sound effects to match. A number of the voice samples sounded like the developers performed them, and consequently made me chuckle; I was really hoping they’d make the sounds scarier for the final build. The enemy design never really ruined the experience, but it was a mixed bag.

Thankfully, the rest of the audio experience is excellent. The game owes probably a third of its atmosphere to the ambient sound effects that saturate the environments. The usual cold wind sounds are joined by distant crackling megaphones and the clanging of rusted machinery. High quality, orchestrated music only shows up when it’s needed—during the action. Each piece fits the scene perfectly, with upbeat tempos, hard guitar riffs and instrumentals that accentuate the battles. A few of the pieces had Soviet marches weaved into them, adding to the game’s communism-gone-wrong style. I liked You Are Empty’s music better than Half Life 2’s, because it actually sustained the action instead of fizzling out right in the middle.

The action sequences themselves are pretty consistent throughout the game, and the whole thing will run you 10 to 15 hours, a decent time for an FPS. There is good variety between the areas and the battles, and it all leads up to some spectacular architecture at the game’s finale. The colossal transmission tower at the end is daunting, but it holds some disappointments as well. First, there is no climatic boss battle to round out the game. You get to the end and meet the main bad guy, and that’s it. The actual ending is quite clever and explains all of the cryptic cutscenes, but there’s no battle preceding it. Secondly, the villain gives you a choice, but the game doesn’t let you make that choice. In the end there is only one option, only one way to end the game. As I said the ending it great (and uncharacteristic of an FPS), but I wish they had made a second end cutscene so that the choice actually meant something.

That feeling of mild disappointment is a good way to sum up You Are Empty. It feels a little behind the times and doesn’t fully deliver in every respect, but it’s still fun from start to finish. To really get the most out of the game, you need to look past the shortcomings and appreciate the work that went into making the levels and setting the atmosphere. I’d certainly like to see Digital Spray do more with their engine—they are obviously quite talented. You Are Empty is a pretty average FPS, but its sense of style makes it much more than the sum of its parts.
Shooters are a dime a dozen but rarely are they done with some artistic flair. You Are Empty isn’t very remarkable as a shooter, but the ambiance and mood it pulls off make up for it. The world is very well modeled and the cutscenes have a nice texture to their visual style. There isn’t a multiplayer, but if you’re looking for a decent solo experience You Are Empty is a good choice, and you could do a lot worse for $30.