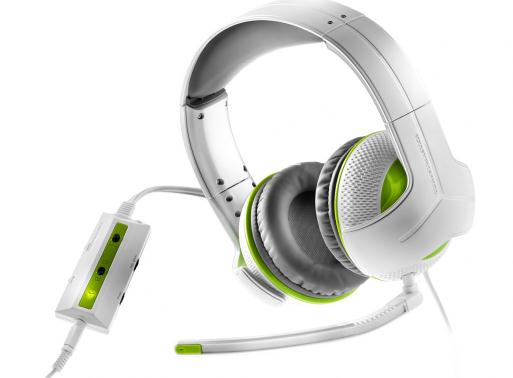 Written by Mike Mahardy on 3/27/2013 for 360
More On: Y-250X
The Y-250X Thrustmaster headphones were designed with the Xbox 360 in mind; the color, the sleek design and the inputs themselves all attest to this. They look, sound and perform well, but a few detriments keep them from becoming much more than just an adequate 360 headset.

The headphones adjust on either end of the head rail, so they should fit all sizes, although it took me some finagling to finally get it snug without any shaking. The head cushion is thick, at 35mm, so any friction on top is all on you to fix. The headphones swivel about ½ an inch in either direction to compensate for any curves around the ears. Unfortunately, the leather can become a bit rough around the ears, especially if you have longer hair, resulting in a few removals throughout play sessions.

The rail extends down to the earpieces in a sleek, white X-shape, again emanating Microsoft’s console. The majority of the Thrustmasters sport the pearly white of the original 360, with lime green accents resting at the center of the headphones and encapsulating their circumferences. Anything that isn’t white or green is a light gray that balances out the two well. All in all, this is a pretty-looking headset.

Supplementing their attractiveness are a few convenient features for online chat. A voice feedback switch lets you balance the game sound and chat noises, while a mic mute switch is readily available as well. The mic is easily detachable, and bends in any direction, then comes to rest tightly without any annoyances.

The Y-250X is compatible with tablets, smart phones, and MP3 players, but the seize might stop you from wearing them on long trips in public. For the sound alone though, this choice might be tough.

Along with these features, the bass and game volume can be adjusted via a remote resting on the USB input cord. This means that the Y-250X has to plug into the USB device, which plugs into the console, which splits to plug into the HDMI input; this results in a mess of cords that can be easily caught on the couch or chair you’re sitting on. For the price, having to deal with cords isn’t always a problem, but it can become a huge mess when they’re not being put to use.

Thankfully, the cable is 5.2 m long, meaning you can probably sit wherever you normally do while you play. It’s just a pain to have a tangled mess to wrap up after every play session. This is a shame, because the Y-250X makes everything else sound amazing.

With 50mm drivers and an electronic bass boost, the immersion resulting from the Y-250X is apparent from the get-go. Explosions send the bass skyrocketing (as much as bass can, anyway), chatter on the streets ranges from behind you to just out of your peripherals, and the treble and mids work to balance the low keys expertly.

I played about three games with the headphones on, and I doubt I’ll go back to stereo surround anytime soon. Game dialogue is clearer; the jumps in survival horror games are scarier; grenades bouncing off of nearby sheet metal are even closer; everything sounds as if it was designed with your ears in mind.
The Y-250X Thrustmaster headset offers Xbox 360 owners a relatively cheap way to experience a high quality audio experience. The immersion and authenticity of the headset will be enough to carry the weight of its $80.00 asking price. Without the mess of cords and the somewhat uncomfortable leather around the earpieces, the set would be ideal for anyone. As of now, though, they’re an Xbox 360 player’s go-to source for close-up stereo.