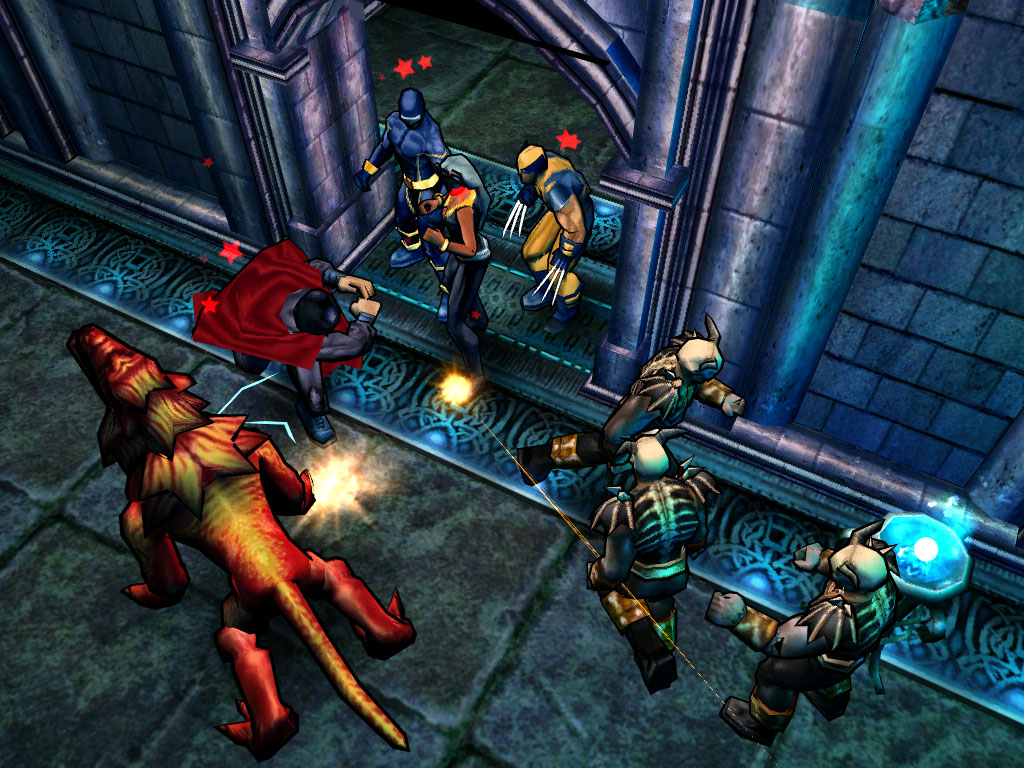 Written by Sean Colleli on 12/9/2005 for PC
More On: X-Men Legends II - Rise of Apocalypse
I’m more of a Spidey fan than an X-Man, but having enjoyed both X films and the surprisingly good animated series, I had decent expectations for X-Men Legends II - Rise of Apocalypse. I never had the pleasure of experiencing the first game, but from what I’ve seen of the sequel, this series just keeps getting better. Activision and Raven have outdone themselves again.

I admit I was surprised that this game played so well. Raven is a sure bet if you give them a shooter to develop, however I was skeptical as to how they’d pull off an RPG/brawler. The result is more the sufficient. X-Men Legends II plays like the X-Men version of Gauntlet; in other words, the RPG elements are just deep enough without cluttering up the experience. I personally like my RPGs well blended with another genre (I HATE turn based games of all kinds, but I absolutely loved Deus Ex) and X-Men Legends II is a thorough, creamy mix of gaming goodness.

The whole Gauntlet element is pretty obvious: beat the living daylights out of just about whatever you want. Plenty of enemies attempt to mob you, and while they aren’t terribly smart, there are enough of them to make the game challenging on the harder difficulties. Aside from the enemies, much of the environment is also destructible. Along with the obligatory crates and pots are smashable walls—you can sometimes progress through a stage faster if you crash through the scenery.

Battling evil has a distinct twist this time around. A bigger bad guy than Magneto has come to town, going by the name Apocalypse (hence the game’s title) so Magneto’s Brotherhood is forced to team up with the venerable X-Men to defeat him. What this means for the player is entirely new combinations of mutants, powers and fighting styles. In fact, you can have arch rivals grudgingly fighting along side each other. The ensuing cutscenes are highly enjoyable as the good and bad mutants attempt to get past their embittered history.

There are eighteen playable characters in all, a few of them unlockable, but most available from the start. They all have a few basic mutant powers to begin with (Wolverine’s claws, Nightcrawler’s teleport) but they gain newer, stronger abilities as they gain experience. You can set the game so each character levels up automatically once they have enough skill points, so that RPG aspect is well integrated and doesn’t get in the way.

More depth is available, however, if you choose to equip individual team members with special items and gear. You can have up to four mutants on a team at once—I usually swapped my teammates in and out to give the whole set a solid chance to level up. Focusing on a core group can yield some very powerful mutants, but the game is long enough that equal attention can be given to most of the different characters.

Regardless of how you organize your team, you’ll want your most developed mutants on hand when you encounter the game’s bosses. They become increasingly harder to beat and display some devious tactics, and Apocalypse himself is a real heavyweight. It’ll take some honest strategy and power usage to topple him. The single-player campaign is a lengthy affair, at least fifteen hours long, and longer if you go for all the extra secrets and items. And yet, there is more fun to be had in the multiplayer mode. Here, the main focus is the cooperative mode, although there is a deathmatch “Danger Room” mode as well. Over the internet four people can team up against Apocalypse and his minions. All the standard characters and abilities are available in co-op, giving it just as much meat as the solo game. The brawler, action-oriented gameplay make Legends II a great LAN-party game.

With all this frenetic gameplay and RPG depth, it’s hard to be distracted by the graphics of this game. That’s probably by design, as X-Men Legends II doesn’t sport cutting edge visuals by any definition. Character models are really quite blocky and the environments follow a similar approach. Legends II is still an incredibly addictive and enjoyable game, probably the best example so far that great graphics do not make a great game. As always the subtle effects and touches matter. The art style is a kind of hybrid—the characters have heavy black outlines and sport a cel-shaded flair, while the backgrounds are realistically modeled and textured.

The plethora of mutant powers are recreated with a good deal of fidelity, depending on what source you’re looking at; they probably take after the movies more than anything else. Battle crashes and explosions are jarring and powerful without looking totally realistic, and you’ll find that Legends II is just as involving as a photorealistic game. This minimalist approach to graphics is good news for players who don’t have bleeding-edge PC’s.

On the audio front of things, Legends II is a well rounded package. Music is unobtrusive and generally blends into the background, although at times it pumps up and enhances the mood. There aren’t any sweeping symphonic pieces here, but the standard arrangement of tunes and tracks is sufficient. Many of the sound effects are canned but a surprising amount are new; a good deal of the super powers have their own distinct sounds, or ones created specifically for the movies.

Voice acting is the real double-edged sword of this game. Patrick Stewart lends his polished, dignified performance to Professor X, and as always he’s a treat to hear. The rest of the cast does a decent job, but on the whole the deliveries are too played-up. Granted, this game is based on a comic book, but some of the lines tread into cornball territory. Thankfully, this small blemish does not detract from the overall experience.

X-Men Legends II is one of those rare sequels that ups the ante in just about every way. It doesn’t dazzle in the technical aspects, but the immensely satisfying gameplay more than makes up for it. Multiplayer is admittedly more of a cooperative deal, but co-cop alone does a lot to extend the replay value. It really is more fun playing with real people, organizing strategies and focusing on a single character. For what small flaws it has, X-Men Legends II is just an incredibly fun game, perfect for the X-Men fan or the hardcore action seeker.
A second shot of adrenaline that complements the original game, Legends II improves upon all the things that made the first Legends great. Voice work is a tad on the corny side, but the cooperative mode and RPG depth just below the beat-em-up surface make this game a real winner.