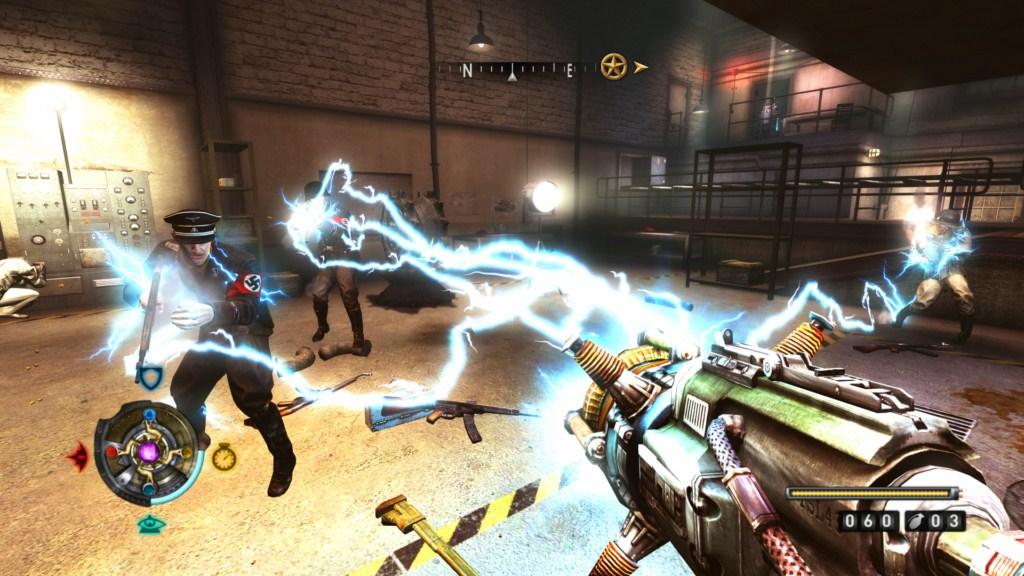 Written by Nathan Murray on 9/9/2009 for 360
More On: Wolfenstein
Wolfenstein has roots as far back as the Apple II and was originally a WWII stealth shooter hybrid that was revolutionary for it’s ability to produce sound effects. When id Software purchased the rights to the IP they transformed the 2D Castle Wolfenstein into Wolfenstein 3D, one of the first and most popular first person shooters ever created. Several sequels later and we now have Wolfenstein.  A  new Nazi supernatural threat looms and BJ Blazkowicz must piece together the mysterious of the fictional town Isenstadt. Staying true to its first person shooter roots, Wolfenstein doesn’t deliver any new and exciting gameplay but it does have a wacky and strange retelling of events in World War II that is pure Wolfenstein.

Despite the demise of Robo-Hitler, the Nazi war machine is going strong and BJ Blazkowicz, agent of the Office of Secret Action, has plenty of work to do. While on a mission to stop a Nazi destroyer from launching a missile attack on London, BJ finds a magic medallion. The OSA does some research on the medallion and evidence points to the Nazi occupied town of Isenstadt being the source of it’s origin. BJ is immediately sent to the town to investigate what is going on in the town and what the Nazi's are doing with the medallion.  This is where the plot usually stops in a Wolfenstein game. Instead of , say, contacting HQ and getting back up, BJ takes it upon himself to rid the town of Nazi soldiers and shut down the Third Reich’s attempts at siphoning magic energies from a parallel dimension to create super soldiers. There is a local resistance that doesn’t trust him and a group of Russians researching the Dark Sun dimension, the source of the magic energy, but their stories kind of fall flat in the face of OMG NAZI SUPERSOLIDER DIE DIE DIE type of action the Wolfenstein is packed with. 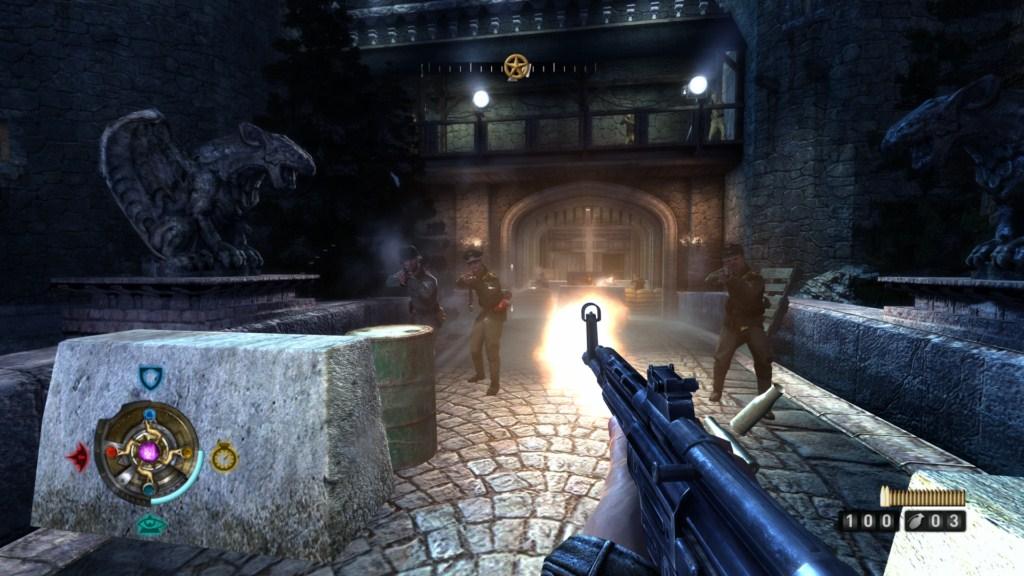 The Town of Isenstadt is a busy place. Not only is there the Nazi occupation to deal with but there’s an archeological dig, airport, warehouse, cannery, secret bases, and secret hideouts but there is also a giant Zeppelin hanging over the town. Wolfenstein runs the gauntlet of generic WW II shooter stages. The only objects in the environment that seem out of place are the pieces of advanced technology and mystical. The level design is varied enough that going from place to place doesn’t feel like a walk through endless corridors.

As with most World War II era shooters I took my normal approach to gameplay. Get the Kar 98k as soon as possible and rack up the headshots from a distance. Aside from the traditional German Nazi era weapons the MP40, potato mashers, MP43, Kar 98k, Flammenwerfer (flamethrower), and Panzershrek there are three super weapons that shoot various forms of blue light. The Tesla gun shots lighting at short distances, the particle cannon shots a steady blast of plasma energy that will literally melt faces, and the most impressive Leichenhaust 44 which is a magic energy cannon that fires blue energy orbs that explode on impact. While fun to use the ammo for these mega weapons is hard to come by out in the field and refilling the ammo at the black market can get very expensive very fast so unless you absolutely need them the more powerful cannons rarely get used. The best bang for your buck when making a purchase at the town’s black market is upgrades for your standard weapons so they have less recoil, more power, and better sights because these are the weapons you will be using the most. Gold is used to pay for these upgrades and this currency can be found scattered throughout the world with bonus gold being rewarded at the end of missions. I would have preferred a greater number of weapons rather than up grade options but then I guess there are only so many ways you can spray blue light at enemies.The Nazi may have their uber soldiers but BJ isn’t without some nifty powers himself. During the initial investigation of the town BJ finds another medallion and discovers how to control the powers it posses. As you advance through the game more powers are added(for a total of 4) which can also be upgraded at the black market. These upgrades are unlocked by finding bits of intelligence scattered around the levels as well as tomes. Using the medallion transports BJ to the veil, the dimensional pocket just between our own and the black sun dimension. While in the veil BJ will move faster, gain super powered sight, slow down time, super charge the equipped weapon, or raise a shield of veil energy to block projectiles. Each of these powers is mapped to the D-pad which means they are somewhat impractical to use during combat. Using the veil powers isn’t a challenge during slow minded AI opponents but having to stop moving long enough to access those powers during an online match is risky at best.

The super Nazi are the real stars of the show here. Invisible assassins, mindless carnal sniffers, super fast and shield using psychics, plasma cannon wielding heavily armored soldiers, and the undead energy saturated skeleton Nazis are all out to give BJ a bad day. With the occasional boss fight, these were the encounters I always looked forward to since I could put away my rifle and pull out the big weapons. Energy burst and flew everywhere, explosions rocked the ground, and space time itself threatened to breakdown. During these epic battles one of two things would happen; I would be dead in 10 seconds and have to restart at a check point or I would win in 20 seconds. In the end Wolfenstein is like a bad lover, they make you put up with all their boring everyday crappy, and when you do finally get to the good stuff it doesn’t last long enough to be satisfying. 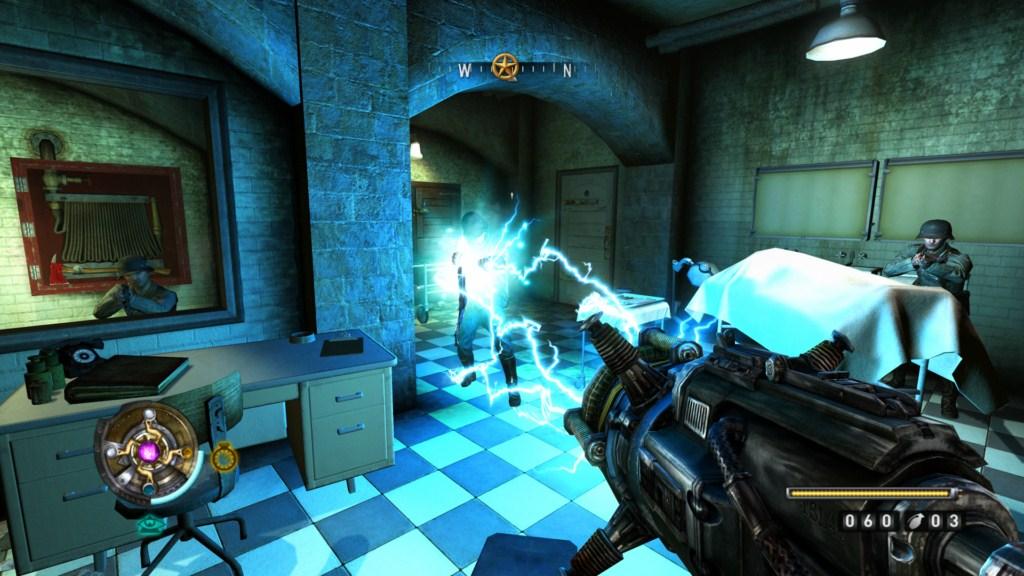 Conveniently, everyone speaks in English with some sort of accent, except BJ, so all the dialog felt a little awkward to listen to. This constant use of English was occasionally broken up by a few German words here or there. I guess the development team couldn’t afford to hire translators to take the English script and translate it into German. Then again Wolfenstein isn’t really trying too hard to be authentic. The weapons and grenades explode with deadly sound and the energy weapons are particularly satisfying in their snap crackle pop of exploding vaporizing discharges. Mean while a generic track of action movie music plays in the background, which adds intensity and a sense of urgency to fights.

Achievement hunters out there should not expect any easy points. Play through the game will get you a couple hundred but the majority of the achievements are online multiplayer  or are ridiculous hard i.e. finish the game without dying more than 3 times, and take a lot of time and effort to achieve. The Online multiplayer has three modes, a progressive unlock system based on a cash for kills system, and is filled with lag and FAIL. Anyone with a little bit of patience can find some frantic frustrating fun in Wolfenstein multiplayer. Anyone with Halo 3 or Call of Duty 4 won’t touch this with a ten foot pole.

With 10% of Wolfenstein consisting of great explosive action and 90% made up of long treks over the bodies of Nazi soldiers just to kill more Nazi soldiers that look exactly the same, its hard for me to recommend this game to anyone. As far as WW II shooters go, I would put this one somewhere in between Brothers in Arms Hell’s Highway and Turning Point Fall of Liberty. Even the veil powers have been done before in games like Prey and TimeShift. I guess if your feeling nostalgic for older Wolfenstein titles you could check this one out but this mix bag of generic FPS fare won’t appeal to anyone else.
The a franchise that should die or at least die on consoles. The Wolfenstein franchise was what everyone else mimicked and now it's just a shadow of it's past glory. For a game with roots in some of the greats of the past its sad but not surprising that Wolfenstein is nothing but a generic FPS with nothing particularly unique to offer.