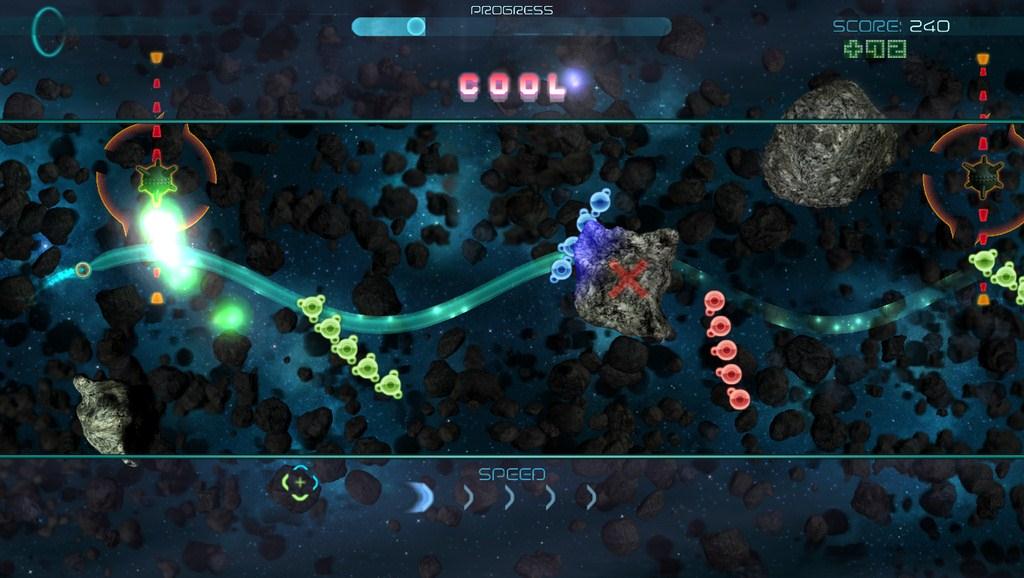 Written by Travis Huinker on 3/22/2012 for PC
More On: Waveform
Independent games are known for their novel approaches to design by introducing bold and innovative gameplay concepts. In what can almost be considered a resurgence of the independent community, it can often be challenging to sort through the vast amount of releases in search of polished and worthwhile titles. Even more difficult, the discovery of a game that fully embraces an unique idea and produces a result that hasn’t been seen before in the industry. These notions can be applied to the recently released independent game, Waveform. Developed by Ryan Vandendyck and his small team at Eden Industries, Waveform tasks gamers with controlling a wave of light through a galaxy of planets. At the beginning, only a slight amount of information is provided regarding the game’s premise and overall purpose for navigating the light wave. Tutorials explain the controls and directs gamers toward their goal of reaching the Sun from Pluto, a journey which traverses over 100 levels through 11 different worlds. As further levels are reached, the goal of reaching the Sun expands into stopping a singularity that threatens to darken the entire galaxy. More elements of the story are revealed in later levels through victory screens that often contain amusing references to popular science fiction franchises and global game statistics.

The question that most will ask is exactly how one controls a wave of light through space. Fortunately, the process is quite simple and only requires the click of the mouse and movement in the correct direction. The wave of light continually glides across the screen with gamers simply tasked with directing its arc and overall shape. The nature of its shape will depend on the various curves and locations of objects that are placed throughout levels. To earn better completion rates and stars for unlocking bonus levels, the wave of light must be positioned upon orbs of light to gain points. The wave’s health points are its rings of light that can either be gained by navigating through them in levels or lost by hitting obstacles, such as dark matter and bombs. Each level is a constant balancing act between collecting points versus avoiding an unfortunate demise. Checkpoints are placed at the midway points in levels or before challenging areas to avoid wave-induced frustration. Along with light orbs and obstacles, an array of objects and scenarios will need to be utilized to survive and gain higher scores. Mirrors, portals, black holes, and other objects or scenarios will affect the course of the light wave. Their close placement often requires a rapid change in the shape of the light wave to avoid obstacles and collect further points. The new objects and scenarios that are continually introduced in each of the game’s worlds provide an increasing scale of difficulty. The controls are never the cause of difficulty, but instead the practice and finesse required for quickly shaping the light wave. As players master the skill and gain more points, the wave will increase in speed resulting in split second decisions. It’s an interesting concept to have the game increase in difficulty as the player becomes more proficient with the wave of light. 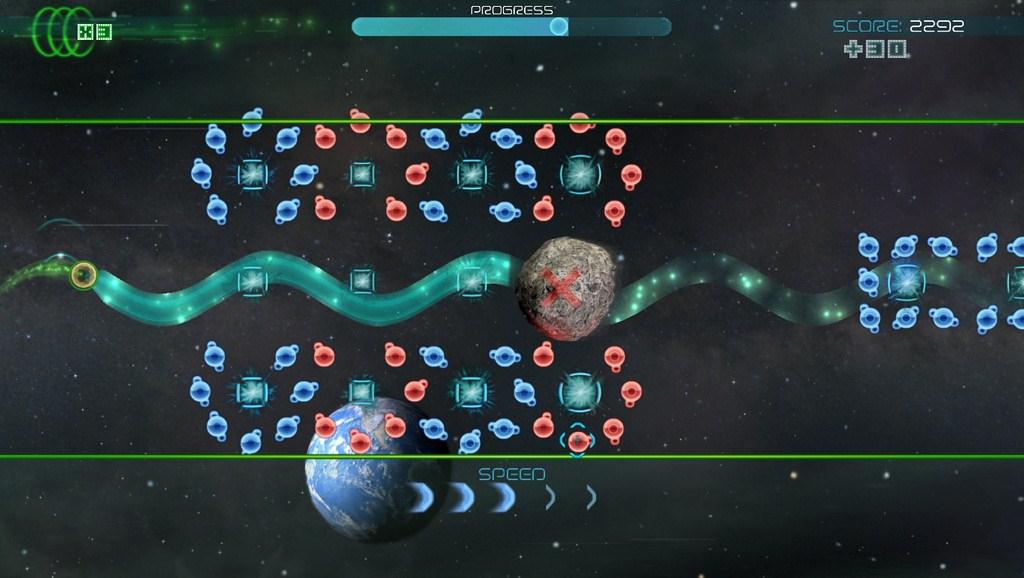 With the increase in difficulty and variety of objects to keep in mind with each level, gamers will most likely experience some frustration with managing to reach the end. There were a few levels that required frequent restarts to understand the rhythm of the level and how to properly shape the light wave. However, these minor spikes in difficulty arose to occurrences of extreme satisfaction once the challenges had been mastered with repeated practice and memorization. The level of quality on display in Waveform is top notch for an independent studio's first game release. The sleek space visuals and zen-like music create a relaxing atmosphere that’s hard to step away from after completing each level. The soundtrack composed by Scott McFadyen contains an assortment of tracks that fit perfectly along with the soothing motion of the wave and star-filled backdrops. Minimalism works well in Waveform’s favor by including only the necessary visual and sound elements for an enjoyable and mesmerizing experience. Also impressive as the game’s presentation is the staggering amount of content that will easily solve any periods of boredom. After gamers complete the 100 plus levels, they will be able to revisit each level in a new game plus mode that adds new effects and scenarios. In addition, each of the game worlds offer a Deep Space mode that act as an endless survival mode with the goal of reaching a high score on the Steam leaderboards. With 60 achievements as well, Waveform offers gamers a great amount of worthwhile content. Waveform is available now on Steam for Windows PC.
The concept of controlling a wave of light is executed flawlessly through beautifully rendered levels and a challenging, but addictive gameplay experience. Gamers looking for a truly unique and innovative experience shouldn’t hesitate to add Waveform to their list of must-play games this year.