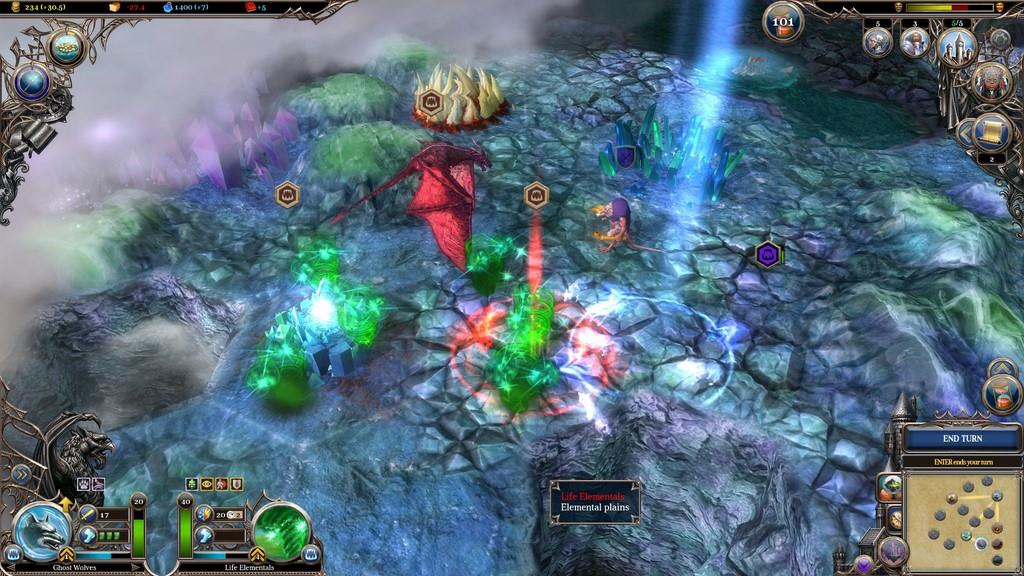 I will skip right to the important part here at the beginning: no, this is not the next “Master of Magic”.  Instead, “Warlock 2: The Exiled” (W2) is a sequel to “Warlock: Master of the Arcane” (W1).  W1 was a decent game, so let's see what W2 can do with it.

First off, I must admit I never thought I would be playing something so much like “Eador”.  The fantasy setting, the hexes, the turns, the world-shards, the spell, they are all here.  Of course, W2 is not an homage to “Eador”, rather, they both spring from the “Civilization” tree, off of the “Master of Magic” branch.

The foundation of your magical empire rests on the available resources: mana, gold, food and specials.  Mana pays for spell casting and magic creature upkeep; gold allows you to hire powerful hero units and perform building upkeep; food allows your cities to grow; and special resources allow you to do special things, such as recruit different units.

Of course, to harvest these resources you will need to build cities.  The world itself is broken into pieces (shards) which can only be traversed using magic portals, so you will rarely have the opportunity to plop down more than 2 or maybe 3 cities on a shard no matter how cool the resources there might be.  This is just as well, however, as there is a pretty strict limit on the number of cities you can have before they start costing you resources rather than adding to them.  You can turn cities over your limit into “special” cities which do not build units but instead pay taxes, kill monsters, worship a deity or other useful things.  As a mechanic devised to limit micromanagement it is efficient if a bit ham-fisted.

Cities are also handy for the buildings they contain.  The buildings often help generate a resource (a farm creates more food, a craftsmen's district more gold) when placed on suitable terrain, as befits a Civ-style game.  Another important contribution of cities is research.  There is the appropriate magical “tech” tree where your mage can learn more and more powerful spells as they work their way up it.  There is even a super spell that can be cast to win the game, for those of us who like to city-build rather than kill everybody else.

The real point of the game, though, is to explore the colorful world with its varied inhabitants and fight them.  For sheer variety and I-wonder-whats-over-the-next-hill-ness, W2 leaves its competition (“Eador”, “Elemental”) far behind.  The monsters are colorful, fun to look at, varied in design and damage-dealing methods.  The terrain is colorful in a bright-fantasy way, with hills and mountains and deserts and oceans and lots of other types of terrain all jumbled together.  Each shard has its own “type”: desert world, ice world, death world, etc., which makes for a pleasant aesthetic.

The game does a good job of rewarding exploration.  There are lots of special resources, they are spread all over the place, and the rewards for getting them make it worth spending some resources looking around.  It is probably the best-crafted part of the game.

There are two modes: a “standard” mode where you just build and fight in the standard 4X idiom, and the “Exiled” mode.  “Exiled” mode is a set-piece campaign, with preset worlds and enemies and a stpry about making your way back to the main world and deposing the evil mage who has taken over.  The monsters get tougher, the battles harder and the staked higher as you move through the various shards.  All in all it makes for an entertaining way to play the game.  The variety of playable races and mage types lends even this (more-or-less) static campaign some replay value.  When “Exiled” mode gets old, there is always the standard mode.  There is even co-op and multiplayer, although it is not clear how well a TBS game of this length will translate to multiplayer. 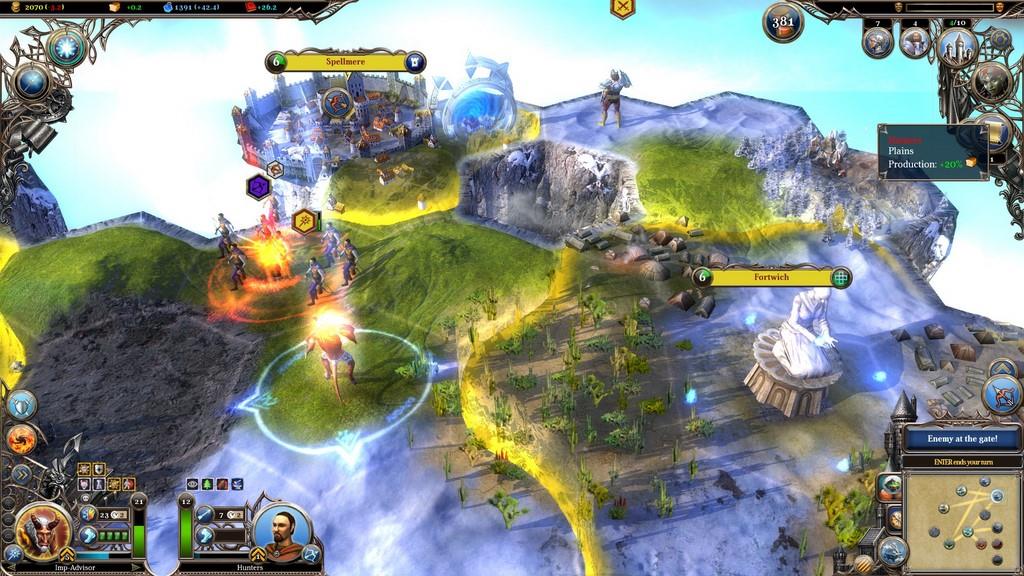 There are lots of other, smaller touches that show that some thought went into the game design.  The variety of damage modes (melee, missile, life, death, elemental, spirit) and the different immunities/vulnerabilities the various monsters have makes for a subgame where you have to get the right units stacked up against the right monsters, or sit around for a long time wondering why your juggernaut troops are losing to otherwise-weak opponents.  Terrain has an impact on which buildings are more efficient, which feeds into the types of units you can afford, which can affect which spells you research, and on it goes.

So what's wrong with W2?  Well, outside of “Exiled” mode, it looks, feels and plays like an improved W1.  It would not have been that much of a stretch to have just released W2 as an expansion.  It is only 30 bucks, but still.  Note that I did not say “expansion and bug fix”.  This is still a buggy game – I had several crashes to desktop, some missing textures and other assorted weirdnesses happen.  The UI could stand to be a little more responsive, also.  There were plenty of times where I clicked the “Next Unit” button to find the next unit without orders and the focus did not move.  So I would click it again and again, at which point it would race through the idle units, turn into the “End Turn” button, and end my turn. 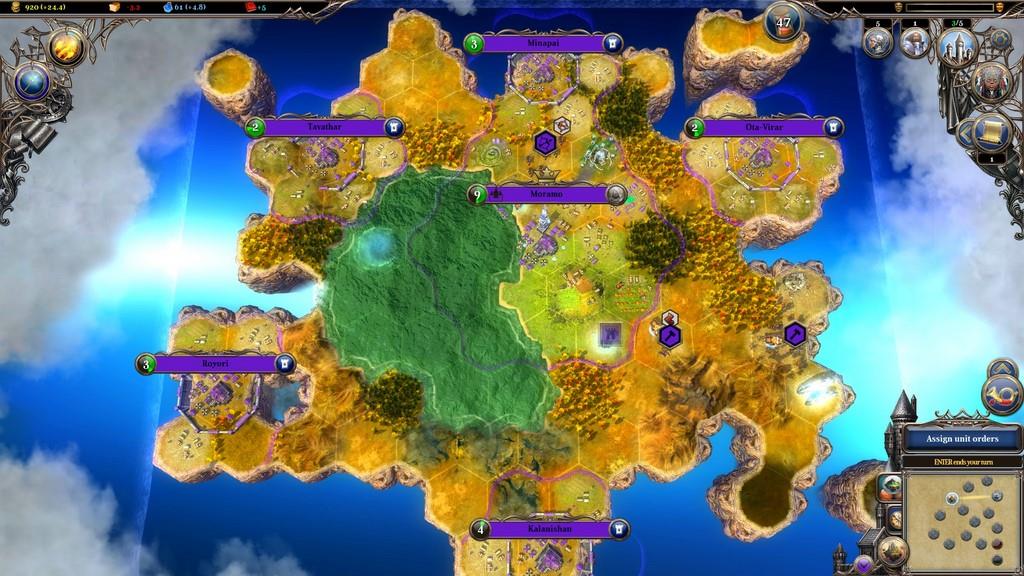 A more direct problem is with the shards themselves.  It can be boring to have to sweep every shard just to find the next portal, if one even exists.  And with the terrain-altering effects of some spells, it is possible that you will be unable to get to the portal, or even find it.  Of course, there is no auto-explore unit order.  And if you do find a portal, there is no way to remember where it goes to.  Not knowing the first time is fun – not seeing the destination on the screen after the initial trip is just annoying.  And getting a unit from here to there is a pain.  The AI (not a strong suit in any case) is not a very good pathfinder.  It does not seem to understand that moveable things, well, move, so it stops auto-moving a unit when any part of its path is blocked, no matter how temporarily, even if the unit could continue moving anyway.

In summary, this is a fun 4X TBS on the lighter side of things.  The bugs and interface problems can be addressed in patches.  What one is left with is a straightforward strategy game.  It is colorful and easy to play, but won't make anyone forget “Europa Universalis”.

A TBS with a sense of humor doesn't come along every day.  Don't mistake light-hearted for light-headed, however - “Warlock 2: The Exiled” is a solid, if limited, game.  It can provide hours of fun in an attractive package without overwhelming the player with detail.