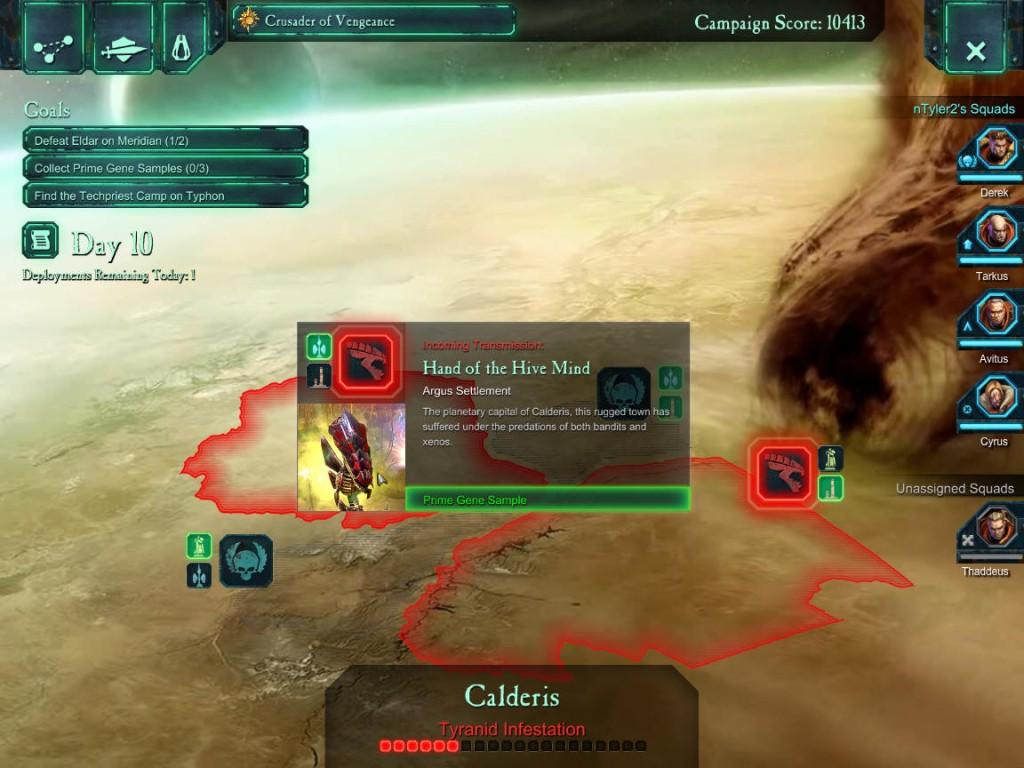 Written by Tyler Sager on 3/31/2009 for PC
More On: Warhammer 40,000: Dawn of War II
I always thought my favorite parts of any RTS were those things that happened away from the front lines. Base-building, researching the perfect combination on technologies to get the edge in combat, and juggling resources would give me hours of entertainment, with the occasional battle to change the pace. After playing Warhammer 40,000: Dawn of War 2, however, I’m seeing that my tastes may be changing. Either that, or Dawn of War 2 is such a good blend of RTS and tactical RPG that I’m willing to temporarily give up my base-building ways. Regardless, Relic has delivered a great title that pushes the bounds of the traditional real-time strategy.

Being something of an RPG fan, I found the single-player campaign was by far the best part of Dawn of War 2. Players take control of a young Space Marine commander as he seeks to purge the galaxy of blasphemous alien forces. Ork and Eldar armies are threatening Imperial space, and must be eliminated. Soon enough, however, a much darker threat emerges in the form of the swarming Tyranids, leading to a heated battle for control of the sector. 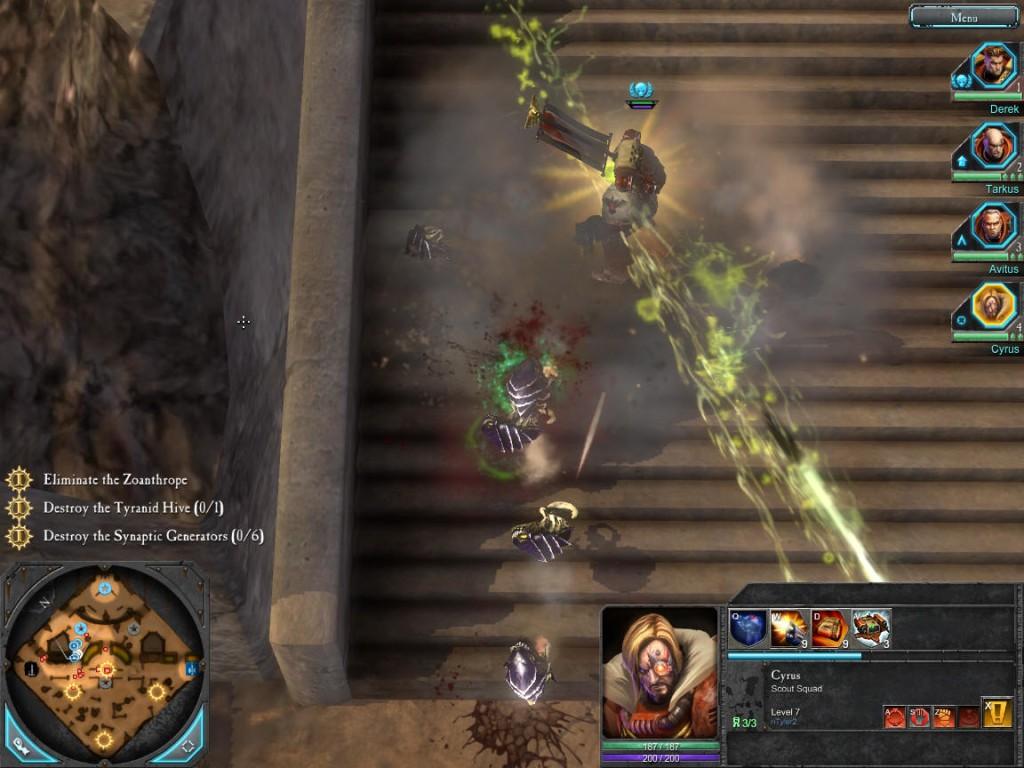 The single-player campaign plays like a real-time RPG, with no resources or technologies to worry about. At first, players control a single Force Commander but soon take command of several different Hero-type units and their accompanying squads. As these forces eliminate their enemies and achieve victory on the battlefield, they gain experience and advanced levels, allowing them to purchase squad upgrades, additional abilities, and greater fighting prowess. Typical missions allow players to choose 4 of the available heroes for a given battle, with each hero having a specialty such as heavy weapons or stealth. Play styles can be further personalized throughout the game, and by the end each hero only gains about half of their possible abilities, meaning a new play-through could be an entirely different experience. Also in RPG fashion, enemies and mission goals drop weapon, armor, and special item upgrades, most of which are random.

The campaign takes place, much like the original Dawn of War expansions, over a series of planetary maps. At first the missions are fairly linear, but after a while players may choose an order in which to undertake the various battles. Often a given scenario is won only after defeating a boss-type enemy, an idea rarely seen in RTS games. And simply conquering a given map is not enough; players must occasionally return to a map to defend it from enemy forces and keep those hard-won strategic points. The plot driving all of this is rather straightforward, but well-enough written and voiced to keep things interesting. Toward the end of the campaign things to get a little repetitive, especially given that players will have revisited some of the maps several times, albeit against different sets of enemies.

The game controls very well, given all the micro-management necessary to bring out the best in the units. Everything is controlled at the squad level, through the hero/leader units, and toward the end of the campaign each of these guys have several different powers and abilities to unleash on the field. Since there is no necessity to constantly scroll back to check on a home-base, there is much more time for babysitting the battles, some of which can turn south quickly. The game also looks great, far better than can be well managed on my aging PC. Even with some of the bells and whistles turned down, I felt drawn into the Warhammer 40,000 universe. The audio is also wonderful, from the sounds of battle to the grumblings of ork boyz. 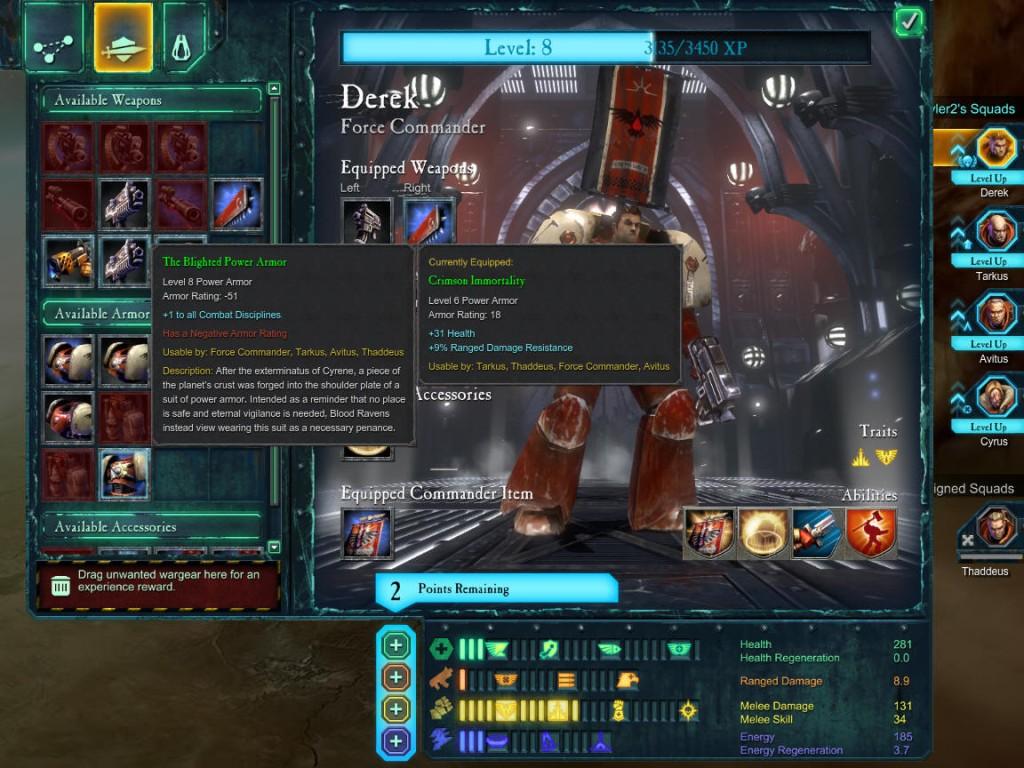 I’m aware that most of the world enjoys the multiplayer action a bit more than I do, and for them Dawn of War 2 delivers what seems to be an almost entirely different game. Much more like the original Dawn of War, minus most of the base-building, Dawn 2 is pure tactical RTS goodness. In skirmish battles, players can control any of the factions in a bid to take over the map. Rather than an entire base, players simply have a single headquarters building to upgrade and protect. A few other structures are available, but nothing like most RTS titles. Like the original Dawn of War, the goal of these skirmish missions is grabbing and maintaining strategic points around the map. There are two resource-type points, giving Power and Requisition needed to upgrade headquarters, spawn new troops, and outfit the squads with the appropriate weaponry and upgrades for battle. Victory is achieved by maintaining control over special locations and for a given amount of time, and keeping the enemy from doing the same. Or you could simply wipe the enemy off the map by destroying their headquarters, which is much more difficult than it sounds. In addition to the skirmish battles, players can also co-op their way through the single-player campaign should they feel like bringing along a friend.

Overall I’m quite impressed with this latest foray into the Warhammer 40,000 universe. Dawn of War 2 managed to hit a lot of my buttons just right with its presentation and RPG-like style. RTS purists may be put off by the lack of base management, but there are plenty of old-school titles out there to keep them happy. As for me, the fresh take on the RTS/RPG scene is just what I was looking for.
A strong RTS/RPG outing into the rich Warhammer 40,000 universe. Real-time strategy purists might find a bit to grumble about, but those wanting some real-time tactical RPG-lite goodness are in for a treat.