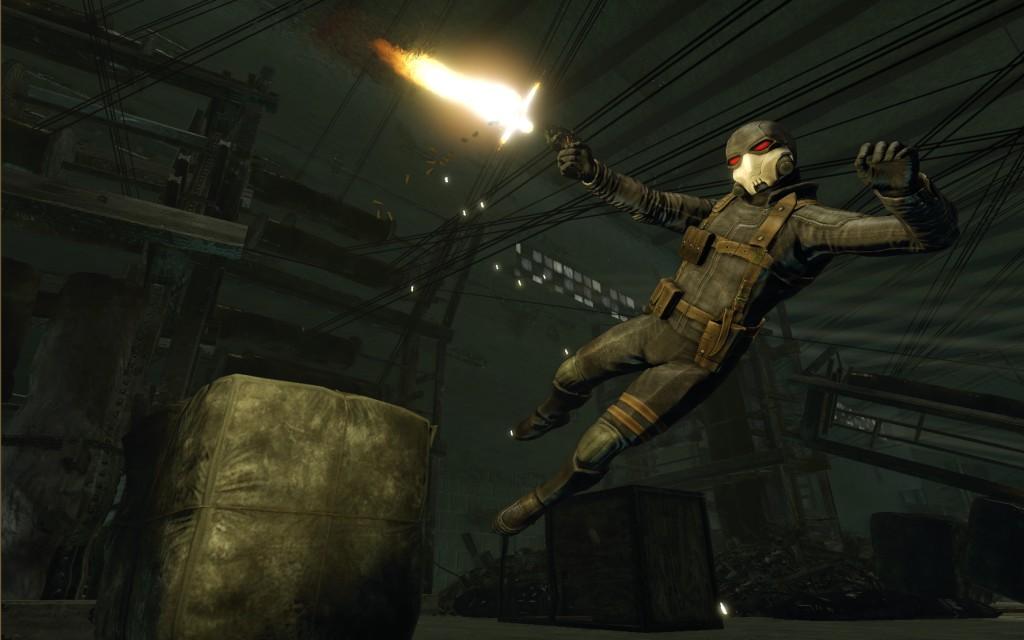 Written by Sean Nack on 4/22/2009 for 360
More On: Wanted
Wanted: Weapons of Fate is a game based on a movie based on a graphic novel. The graphic novel was, for lack of a better word, graphic; it featured adult language, horrific violence, and even implied rape. The movie was far from a direct translation of the book, but it kept a lot of successful elements, like over-the-top action sequences, “bullet-curving”, and a rebellious, cubicle-smashing attitude. So what did development house Grin decide to carry over? Bullet-curving? Yep, it’s there, and it’s surprisingly fun. The over-the-top action sequences? Watered down, I’m afraid, into almost rail-shooter simplicity. The aforementioned rebellious, cubicle smashing attitude? It’s been replaced with childish, foul-mouthed non-chalance that a 12 year old could have written.

Wanted continues the story of movie/book protagonist Wesley Gibson as he continues his war against the shadowy Fraternity. For some reason that I won’t spoil for you but is never made entirely clear, Wesley is considered by the Paris-branch of the Fraternity to be an “abomination” that needs to be eliminated, apparently due to some circumstance of his birth that isn’t really clarified, but it has something to do with a “no intermingling of assassins” rule. The somewhat ambiguous ending indicates that Grin intends to make this into a trilogy, so the exact motivations and explanations are never made crystal clear. Wesley’s quest to hunt down the one-eyed assassin known as “The Immortal” leads him from Chicago to rural France, while the game alternates Wesley-stages with flashbacks to Wesley’s father, Cross, during his conflict with the Fraternity, who has a particularly well done level that takes place on a commercial airliner. 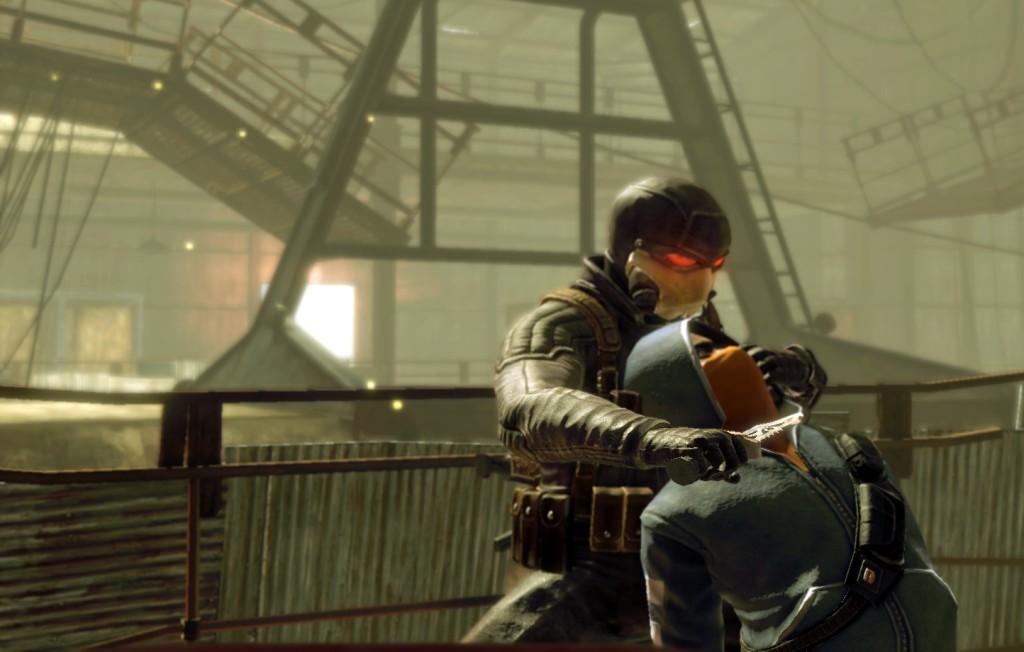 The levels are fairly well-designed and clearly intended to make use of the game’s intuitive, Gears of War-like cover system, with an abundance of shipping crates and fancy European streetlights. The issue is that the levels are not only often repetitive, but literally repeated: you run through the Fraternity’s destroyed Chicago headquarters as Wesley, and then through the same building, before the destruction that takes place in the film, as Cross. You run through the same parts of the same levels, and they’re just not different enough to warrant another run through. One level requires backtracking through about half the area, first through cubicles, and then cubicles on fire. It’s frustrating because there was some legitimate creativity going on in the airplane sequence, and it feels like very little thought went into the rest.

As repetitive as the levels are, they have nothing on the gameplay. The sensation I got playing Wanted is that of a cover-based, 3D Galaga; the enemies just keep coming, providing not much of a threat individually, and only a little bit of a threat en masse. There are, approximately, eight types of enemies: standard goon (one shot, one kill), goon with shield (requires bullet curve or flanking), Cornershot goon (gun is attached to a camera device, so he doesn’t have to step out of cover; killed by a curved bullet which makes him break cover, then you hose him), knife-wielding goon (QTE), red hoodie wearing knife-wielding goon (faster QTE), sniper goon (curved bullet), bullet-dodging goon (curved bullet/bullet storm), and boss characters. Defeating this assortment with your three types of weapon (first is a pistol, second is a bigger pistol, third are two full-auto pistols) is shockingly easy and repetitive. I played through on the normal difficulty level, and didn’t die once until the final level. Wanted is surprisingly easy, even on the hardest difficulty level, which I played through the first 3-4 acts of before being too irritated by the dialogue to continue.The script is easily the worst thing I’ve ever heard or read in any medium, ever. It consists of childish, immature, embarrassing insult comedy. Here are a few examples, edited for the kiddies:

Villain: You fight well, Wesley Gibson!
Wesley: Runs in the family, s**t-pants!
V: So does death!

V: You’re an itch on my balls Wesley!

W: Surrender now and I’ll pretend to respect you when we f**k later!

Really? The comic struck a tone of rebelliousness and criticism of the medium (as well as American complacency) through, admittedly, sex and violence, and the movie took the same stance on the modern American male and cubicle culture through a similar blend of violence and trash-talk, but the game goes out of it’s way to make Wesley such a crass, non-chalant badass that it ends up being repulsive and just stupid. It doesn’t even make sense in context! Captain Scratchy up there is just meeting Wesley for the first time, and all of a sudden Wesley is an “itch on his balls”? S**t-pants? Are we 12? If I were grading this game on dialogue and story alone, it would get an F. 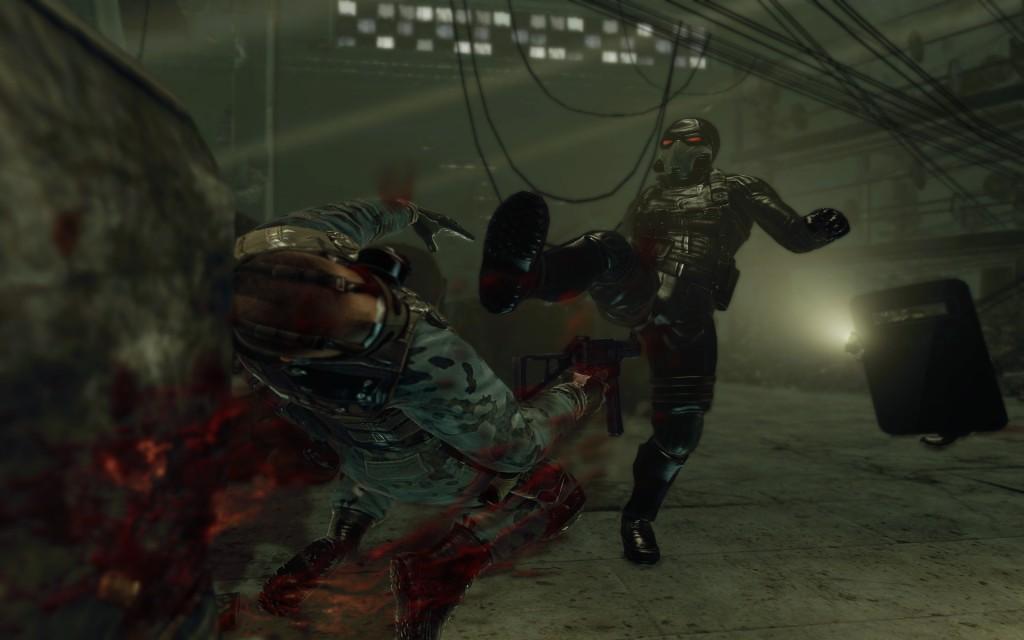 Fortunately, it has some redeeming qualities. The graphics aren’t terrible, and are even pretty close approximations of the actors, but they ultimately aren’t anything exceptional. The audio just consists of gunshots, and music that, in all honesty, I only noticed it in the final stage, and while I admit that I’m pretty deaf I also have the game turned up pretty loud. What does somewhat help, if not save, the game is that it is a little fun. The bullet-curving is well-executed and feels good to pull off, and that combined with the complete inability of the AI to hit you from 3 feet away does make you feel pretty powerful at times. The cover system is intuitive and very rarely fails you. I think the game would’ve benefited from a time-trial mode; if you’re already making it pretty easy, why not try and beat the clock too? Maybe gamers could grab a stop-watch, and time themselves? Though I don’t think it’s the best comment on a game when making up your own way to play through it is the most fun aspect. As easy as it is, Wanted is also amazingly short: I beat it in under 5 hours.

Wanted sadly continues the movie-tie-in trend of terrible games. The dialogue’s terrible, the AI is infantile, the graphics are passable, and the gameplay is innovative for the first ten minutes you receive new abilities, until you use them about a thousand times each. I just don’t see what there is to want in Wanted.
Wanted’s repetitive gameplay, awful dialogue, and plain-jane graphics provide an underwhelming experience that doesn’t make a case for being wanted by anyone.