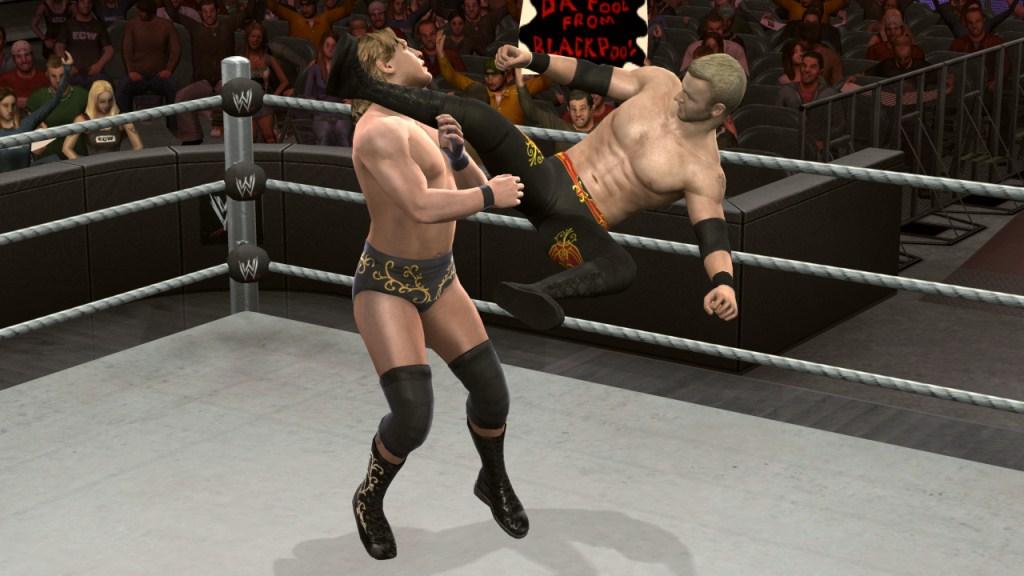 Written by Nathan Murray on 11/25/2009 for 360
More On: WWE Smackdown vs. Raw 2010
Huge biceps and chests take center stage for another SmackDown vs. Raw title this year. 2010 offers more features than any previous title with increased options for creating content and sharing it over Xbox Live. I initially thought that with the create-a features SmackDown vs. Raw 2010 would be the last wrestling game one would need to buy this console generation but there is still some room for improvement. While SvR 2010 manages to get the submission hold locked in, a few technical problems keep it from being the holder of the world’s ultimate wrestling game.

I’ve already covered some of the new features in my preview article but I’ll reiterate the key areas of improvement again here. The two most impressive new features are the simplified heads up display and the ability to share and download user created content. The HUD is now a simple ring around the controlled character that displays a blue bar indicating the level of momentum the player has built up. Gone are the mannequins floating at the top of the screen that show the status of damaged limbs. Instead the game relies on the character animations and new “realistic combat damage” in the form of welts, bruises, and blood to communicate to the player which limbs have taken damage. This simplified HUD system clears the screen of clutter and proves to be an intuitive way to keep track of the damage the wrestler has sustained. 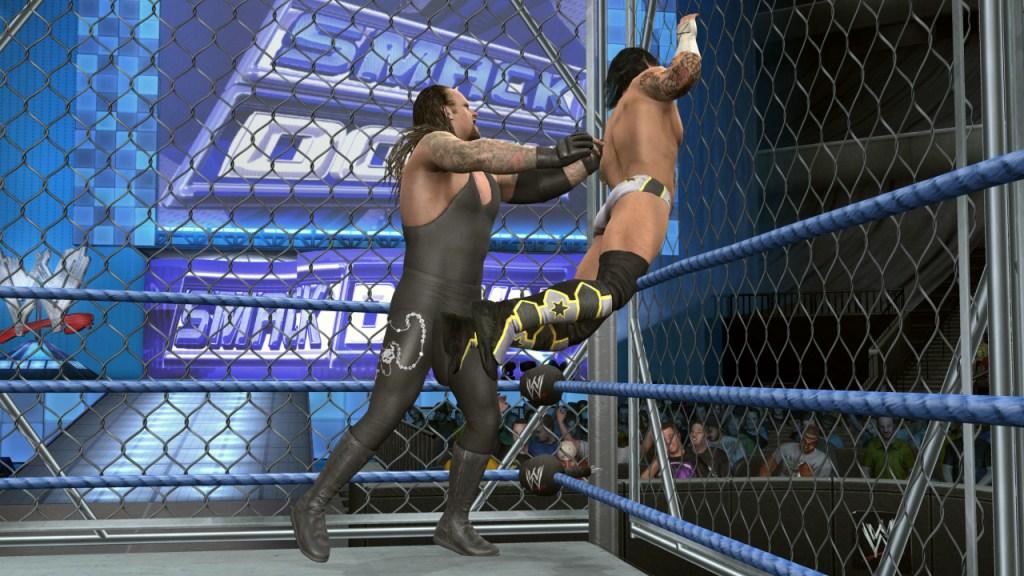 The second, and sure to be fan favorite feature, is the ability to share any and all user created content online. Created superstars, divas, finishing moves, art, highlight reels, and the new create a scene can all be uploaded and shared with friends online. Each piece of content can be commented on and rated by the community with a handy search function to help players find specific content. At the time of this writing there were 50 or so Bill Goldberg created superstars online and most were very impressive in the amount of detail they incorporated. The only down side to the content sharing is that it takes a while for the content to load.

Have no fear! Loading throughout the rest of the game is as fast or faster as last years title. This is even more impressive considering the  improvements made to the create a superstar mode, making your created character look and move more realistically than in any past iteration. That said, the overall presentation has not improved dramatically from 2009. The audience is still blocky and superstars and divas are just this side of the uncanny valley. Until the audience and characters feel more real and not like  video game characters the WWE games will fail to reach the next level immersion. For a videogame the art style was a close to the real thing, but I suspect there will be great improvements down the road. 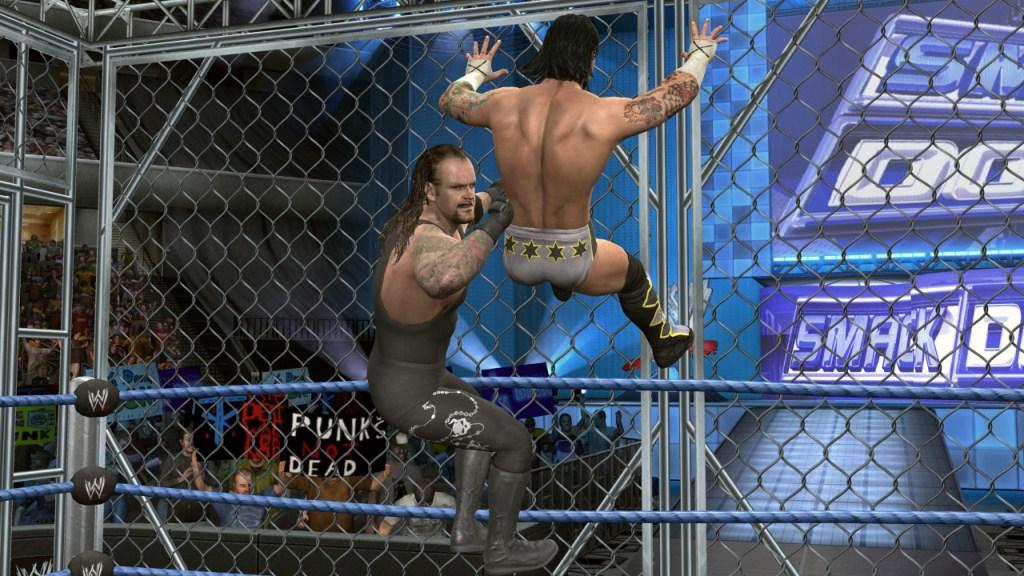 My own created superstar’s speed stats were pumped all the way up but he was still sluggish compared to most of the current superstars on the roster. The difference in speed didn’t matter as much in the single player modes but I suspect that during online multiplayer the existing superstars would have a slight advantage over the created superstars. Created superstars’ stats are increased based on performance during matches in either the road to Wrestlemania or career mode. Points earned for ending the match quickly, submission holds, use of foreign objects, etc. are used to pump up individual stats such as speed and grapple strength. When a stat reaches a milestone a new ability is unlocked for the created superstar or diva which can be applied in the same menu used to customize their move set. These abilities can be anything from stealing your opponent’s finishing move to a simple hammer throw which sends opponents flying across the ring. Choosing the right abilities for your created character is key to diversifying and expanded their abilities in the ring.

Menus are more easily navigated using the start button. At any time, except during a match, the main menu can be accessed. This proves handy for jumping to different parts of the game without having to sit through several load screens. From the main menu you can access all the various functions of SmackDown vs. Raw 2010 including all of the create-a modes. Easier access does not make the various functions easier to understand unfortunately. There is no help offered to explain various match types, particularly how they’re won, and I was disappointed by the lack of a preview function for the move set editor. It would have been nice to see what moves I had selected prior to trying them out in the ring. It didn’t help matters that moves often had several different versions. Even if I knew and understood each and ever wrestling move available, there is no way to tell how each version of a move is executed without trying it out during gameplay. Now to the meat of the matter so to speak. The road to Wrestlemania mode has returned again this year with new characters and unique stories. The six different playable chapters take about 2-3 hours to complete and offer the most entertainment out of all the rest of the content on the disk. The created superstar road to Wrestlemania chapter was entertaining and it is sure to be the closest many fans have come to feeling like they’re a member of the WWE. Each chapter in the road to Wrestlemania story is set apart, meaning that at no time do the stories coincide. This is a missed opportunity for some good story telling with a lot of twists being revealed piece by piece by playing each chapter. While that would be the ideal way to play through road to Wrestlemania I can understand how difficult it would be to keep everything clear and concise while keeping the integrity of the plot.

While the road to Wrestlemania mode is the most entertaining part of SmackDown vs. Raw 2010, it is also very frustrating to play at times. Matches were constructed to fit the story, so ,when you are meant to win a match under certain conditions there are no other options. Conversely there are matches where your selected character isn’t meant to win. I was often left with a sour feeling after kicking butt in a match, only to have the game rest control from me so my character would lose. This didn’t happen often enough to keep me from enjoying the experience but it was frustrating when one of these no win scenarios did occur. I might have been less bitter if everything was explained before the match started. If you’re reading this developers, please rely less on the players intuition and give us a heads up to what’s going on! 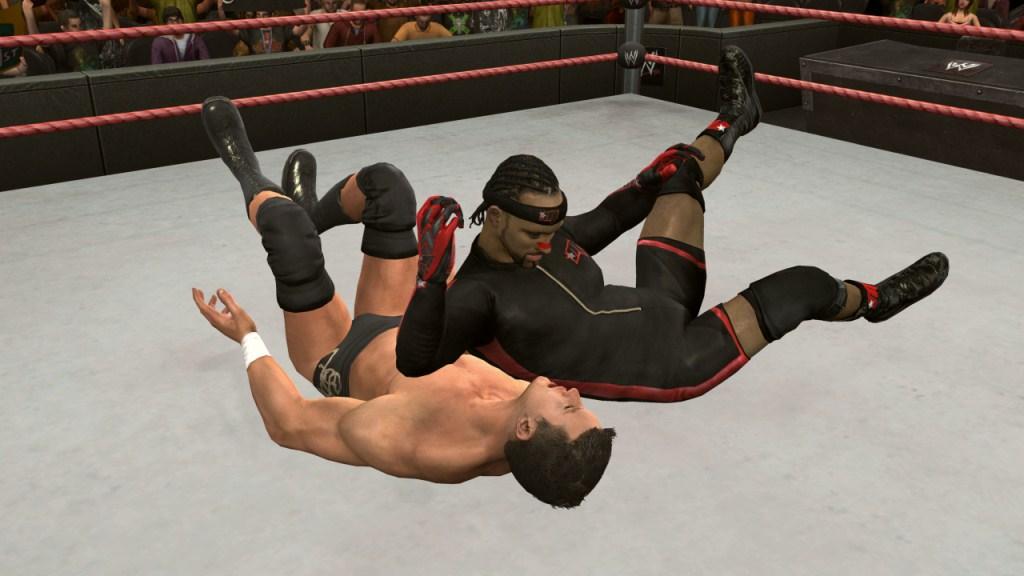 My other major complaint about the road to Wrestlemania mode was the occasional backstage bouts. The environments looked functional and complete with a lot of detail, but the fights were awkward. The only sounds are competitors’ grunts and groaning. With no sound track in the background there was only eerie silence punctuated by labored breathing and sickening thuds of the fight. Otherwise the soundtrack and voice acting were serviceable with noted performances being John Cena and Vince McMahon. My favorite feature, the ability to skip the song playing during menu selections has returned. While every superstars’ and divas’ opening song sounded great, there are those I prefer not to listen to.

If the road to Wrestlemania is SvR’s most entertaining feature then the new simplified controls are its most accessible. Reversals are now a single button press easing the difficulty down to a more playable level. Grapples come in a multitude of flavors including quick grapples initiated with the right analog stick and strong grapples which are initiated by using the RB button and the right analog stick. Grapple attacks can even be used on the run expanding the number of moves a character can do while charging. Ground grapples and special grapples are now context sensitive. In all there are a maximum of 70 or so possible grapple combinations not including match sensitive grapples, however most playable characters only use a fraction of those moves. Strikes are also context sensitive and can be modified using the left analog stick while standing. This marriage of analog sticks, face buttons, and modifier buttons for running and strong grapples gives you a staggering number of options for attacks while remaining intuitive to use. This the most accessible and robust control scheme yet in a wrestling game. 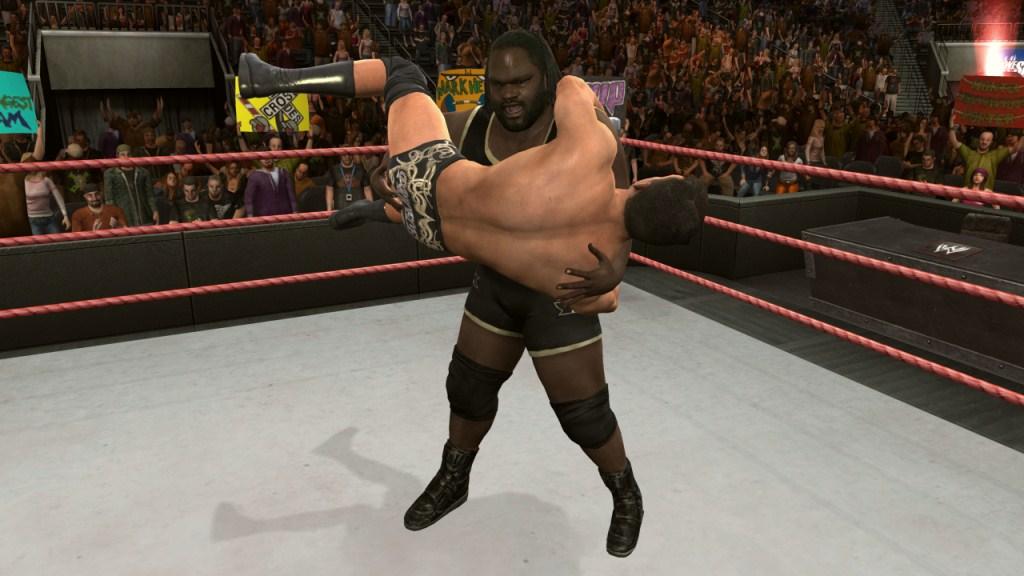 There are other game modes including the various exhibition matches, online multiplayer, create-a modes, and career mode that offer even more content to play with. For the sake of space and time I won’t go into all in detail but will offer up this; every bit of content offered in SvR 2010 is equal in experience of or surpasses SvR 2009. All this content coupled with the new controls, simplified HUD, new road to Wrestlemania and the ability to share all created content online makes SvR 2010 far superior to last years title. There are a few dark spots and minor flaws that keep this from being the ultimate wrestling game. I wholly recommend this year’s iteration for the hardcore and fair weather fans of the WWE. There are sure to be future titles that are even more impressive, so while SmackDown vs. Raw 2010 is the best so far, it is not the end all be all of this console generation.
A few hiccups keeps this title from being perfect but SmackDown Vs. Raw 2010 is everything a fan could want in a wrestling game and more. Shared create-a content reaching near the levels of LittleBigPlanet elevates SvR 2010 from past iterations into a new experience. This is not the end all be all of wrestling videogames but THQ and Yuke's is certainly going in the right direction.