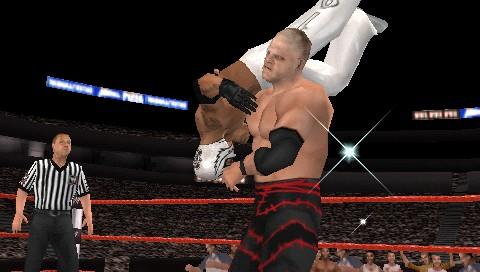 Written by Cyril Lachel on 3/5/2009 for PSP
More On: WWE SmackDown vs. Raw 2009
Before we get serious and talk about WWE Smackdown vs. Raw 2009 for the PSP, it's important that you know where I'm coming from. I am not a wrestling fan. In fact, I have never been a fan of wrestling. While I respect the athleticism and the amount of punishment these guys can take, there was always something about the scripted aspect of the show that turned me off. This disdain for the sport influenced my enjoyment (or lack thereof) of the various wrestling games, which I always felt were like fighting games with really terrible controls.

It's important to know this about me because if you're one of those people who loves wrestling, loves all of those crazy steroid-enhanced characters and, most importantly, loves wrestling games, then you should just stop reading this review immediately. I'm serious, if all you're looking for is a fun portable wrestling game with tons of characters and options then you should definitely pick up WWE Smackdown vs. Raw 2009 for the Sony PSP. This is a solid handheld wrestling game, and at the end of the day that's all you need to know.

Okay, now that all of the wrestling fans are on their way to their nearest game store let's have a candid conversation about WWE Smackdown vs. Raw 2009. Even if you only have a passing interest in wrestling games you will know what to expect from this PSP game. It gives you a wide assortment of muscular characters (over 60 in all) and all of the content you could ask for, all while offering good controls and authentic sound effects. Heck, even the graphics are exceptional. Throw in four person multiplayer and you have the best portable wrestling game you could hope for. There's just one problem, I can't stand playing it.

I've tried, trust me I've tried. I went through nearly all of the different modes, used most (if not all) of the characters and even found myself getting pretty good at pinning fools to the ground. But try as I might, there's just something about this game (like all wrestling games) that just feels wrong. Although the characters have a lot of different moves, the way the game is laid out makes it seem very limiting. The game certainly gives you a lot of options, there are tons of special moves and every character has their own unique specialty move. Yet none of this got my blood flowing, it just didn't feel like I was actually getting anywhere ... even when I was.

WWE Smackdown vs. Raw 2009 gives gamers a bunch of different options, including different story modes, exhibition modes and more. There's a story mode, but I found myself growing impatient with the non-stop load times. This is one of those games where you start the mode and there's a long load screen, then a short video, then a load screen, another short video, another load screen. There must have been four or five lengthy load screens before I even entered the rind, and when I did I was ultimately underwhelmed.

Thankfully there are fewer load screens in the other modes, but sadly the underwhelming gameplay is present no matter where you go. The basic problem is the game's movement, which is controlled by the D-pad. For the most part this isn't a bad thing, but when it comes to running and other common functions I found that the controls just weren't adequate for the task at hand. For whatever reason you can't use the PSP's analog stick to control your character, since it is reserved for the various taunts. Taunts? Are you kidding me? Now, I know that wrestling is about trash talking and adding as much personality to the fight as possible, but this is a video game. A video game's goal (beyond simply being fun) is to have good controls and make things as easy for you as possible. This is not the case with WWE Smackdown vs. Raw 2009.Speaking of not making things easy, even though the game has pop up boxes that are supposed to help, I found that they weren't even remotely useful to me. In fact, I would say that they actually made me more confused as to what was going on. All I knew was that I was in the middle of a ring having a really hard time controlling my character. It wasn't until I scanned the game's multiple pages of in-game instructions (found in the pause menu) that I realized just how this was going to work. However, even after I figured everything out, I still didn't feel like I was making much of an impact. Worst of all, the matches seemed to run on forever. Maybe it's just that I'm used to the speedy rounds in Street Fighter or Soul Calibur, but I felt that the game's matches went on so long that they wore out their welcome.

Thankfully I was able to learn the controls and have some fun with the various gimmicky matches. I mean, it wouldn't be a wrestling game if it didn't have over-the-top matches, right? I quickly learned that I rather enjoyed playing with fire, getting stuck in a cage and so on. And the more I looked over the game's various modes the more excited I got. If there's one thing WWE Smackdown vs. Raw 2009 does well, it's variety. You still control your characters the same way, but there's something to be said about having dozens of different types of matches to play through.

Beyond all of the gimmicky matches, I found the most exciting thing about this game to be the brand new Road to WrestleMania. In this mode you choose one of five superstars (including Triple H, John Cena, CM Punk, Chris Jericho and the Undertaker) and then follow them through 81 days of attempting to earn your spot at WWE's biggest show. What makes this mode different from all of the other modes is how different it is per character. When you choose a character you do the sorts of things that he would normally be into, such as visiting the troops in Iraq. Best of all, this mode features a lot of different types of matches, so you're always being asked to do new and interesting things. It's still plagued by control problems and severe load times, but this is a fulfilling experience that is an excellent fit in this game. 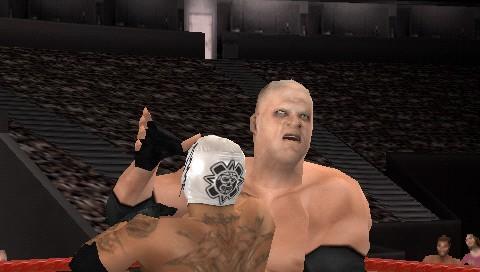 Visually the game looks good, especially when it comes to the character models. In fact, I would venture a guess and say that most of the time and energy went to making the men (and Divas) look as detailed as possible. Unfortunately the rest of the game's graphics aren't nearly as spectacular. Everything outside of the ring looks flat and unnatural, to the point where the audience is almost laughable. Thankfully you aren't spending too much time looking at the audience, instead you're looking at the wonderful character animations and cool signature moves. The graphics are a little hit or miss, but for the most part you will be satisfied with the way this game looks. The sound is also good, especially when you hear the various effects and each character's introduction music. WWE Smackdown vs. Raw 2009 isn't going to win any awards for its presentation, but I never noticed anything that would diminish the overall experience.

Fans of sweaty men grappling each other will no doubt have a good time with all of the cool options, matches and story modes, but I found the whole thing to be a test of my patience. There's nothing technically wrong with this game, which is why I had such a hard time finding the words to describe it. WWE Smackdown vs. Raw 2009 seems to have everything a wrestling fan could want, but I just couldn't get past the slow-paced combat and the complicated special moves. I also found that after awhile all of the characters started to blend together, so as somebody who doesn't have a favorite wrestler I had something of a problem keeping all of the similar faces straight. But maybe that's just me. Either way, it really doesn't matter what I have to say. Let's face it, if you're the target audience for this game my opinion means very little. I didn't care for it, but if you're fan of this sub-genre then you should definitely give it a shot.
In this review you learned that there are tons of characters, all sorts of cool matches, a few different story modes and solid graphics. Oh, and you also learned that I don't like wrestling and get bored by wrestling games. If this is your type of game, then have a great time, everybody else should probably get their kicks elsewhere.