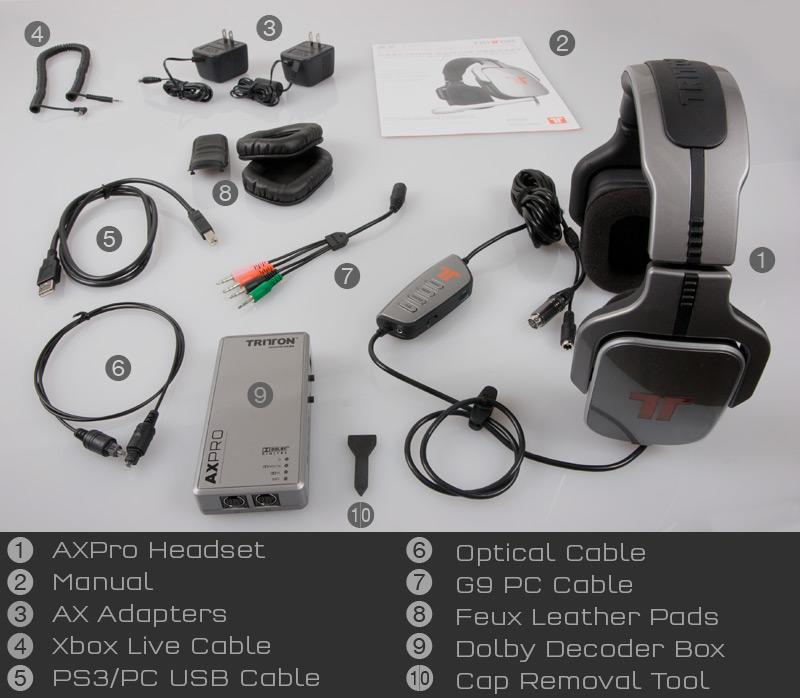 Written by Ben Berry on 4/6/2009 for PC   PS3   360
More On: AX Pro
One truth I have come to learn is that audio reviews are probably harder than any other kind of review; especially headphone reviews. With most pieces of hardware, all aspects of usage can be measured: speed, compatibility, refresh rate, etc. With headphones, once you get past the form factor, the power needs, the “output capacity” or any other special features, it all comes down to a judgement call. How much better does one pair of headphones sound over another to my ears?

This is where the Tritton AX Pro makes things easy: From a sound standpoint, it is simply the best unit I have ever heard.

Let’s get the boring statistical stuff out of the way first. 4 drivers (3 – 30 mm drivers, and a 40 mm subwoofer) per ear. Dolby Digital and Prologic certified. Fiber Optic input. Compatible with 5.1 sound cards (PC/Mac), Xbox/360, and PS2/PS3. You can find this stuff all on the package, and while it’s important information, my review won’t go into too much detail on all that. I want to talk about what’s unique about this unit, and what really matters.

I mentioned the hardware in my first impressions, but I want to go there first, because there are some important pieces of info here. For one thing, the unit itself is built like a tank. I’ve dropped the headset no less than 3 times in the past several weeks and not had any issues with the unit from the sound quality or component side. It’s light and yet substantial, which is a useful combination. I’ve done a couple of 2 hour NHL 09 sessions with the AX Pro on, and didn’t have the neck pain I eventually began to experience with a couple of the other units after prolonged use, specifically the Astro Gaming A40, which from what I can tell is the primary competitor to the AX Pro.

The cords are thick (which is important in an apartment with 3 cats), but not burdensome. Probably the single best hardware feature (aside from the drivers, of course), is the volume control/mixer built into the headset cord. Apart from the standard speaker volume, mic volume, and mike muting options, there is also a set of 4 mixer control system buttons. What’s cool about these is that each button uses 5 different colors of LEDs to display the current volume of each of the 4 sets of drivers. I think it’s pretty obvious how useful this is, once you’ve mastered which color means which volume. The key to the color/volume coding is printed on the back of the mixer. It would have been more helpful to have these instructions illuminated as well.

The Decoder and input management box is relatively simple to use, and allows two headsets to be connected. It’s got a couple of switches that some users might find confusing, but frankly, with Dolby, if there aren’t at least a couple of advanced controls, it probably hasn’t been implemented right.

The pads are the hit and miss area of the hardware. The ear cones have a nice fit, and surround even my largish ears without putting much if any pressure on my earlobes. There is a decent amount of give in the padding at first, and as they break in, they become more comfortable. The head support is comfortable from the get go, but after only a couple of days worth of use, it fell off the unit. Closer examination showed that it was only attached to the unit with a large amount of double-sided scotch tape. Not what I’d call high quality, but probably not something terribly important. Neither is the microphone which is basically of standard quality, nothing great, but more than serviceable.

What is important about the hardware is the current power configuration. As it stands, the AX Pro requires 2 AC adapters to power the unit. 1 for the headset, 1 for the decoder. The representatives have told me they are closing in on a single adaptor solution, but it is not yet available. In a world that is moving more and more “green”, this isn’t the optimal solution, but it is no worse than equal to the battery option available for the mixer on the A40.

So, down to the nitty gritty. The AX Pro has a sound quality that I just don’t really understand how they are capable of achieving in a headphone. A home theatre generally can’t compete with the volume of headphones due to proximity. The headphones are closer to the ear, and therefore, sound louder. That proximity also makes it significantly easier to detect imperfections, which is something you can really only pick up on through experience. Most systems have a perceptible weakness, and usually it’s distortion at high volumes. The first thing I do with any new test unit is plug it into my PC, open iTunes, and fire up some Metallica at max volume. Usually this is the biggest weakness, but not the only one.

With the AX Pro, I didn’t get any noticeable distortion. The unit actually was too loud for my ears at that volume level, and I had to pull it off after a minute, but I couldn’t hear any real distortion. In terms of sound, I guess the only thing I could complain about is that it would be nice to have more than 5 presets for the drivers, but that’s more a flaw of the controls than the sound. I couldn’t have been happier with the overall sound quality, and the Dolby was particularly impressive, especially in games like Left 4 Dead and Madden, where sounds coming from different directions were easily identified. Under many simulated surround sound systems, this is one of the areas of weakness.

In conclusion, I have to say this unit is essentially the top of the line among gaming headsets. The AX Pro’s capabilities equal or exceed every other unit on the market, and while the hardware has its minor foibles, it outclasses every other unit on the market in at least one aspect. The minor issues really don’t detract from the listening experience. I recommend this unit to anyone who wants the best sound possible for gaming, anyone who participates in team tournaments where clearly hearing a teammate’s voice can be an advantage, or really, anyone who can afford it. The $159 price tag is a bit steep for most gamers, but those who want the best are going to be willing to pay for it.
The Tritton AX Pro eclipses every other gaming headset on the market. If you had told me I’d like the feel, sound, and overall capabilities of a headset more than the Astro Gaming A40 before the AX Pro came along, I wouldn’t have believed you. But It has, and I do. The two minor issues with this unit (dual AC adaptors, shoddy headrest pad attachment) do almost nothing to detract from the overall experience of using it.