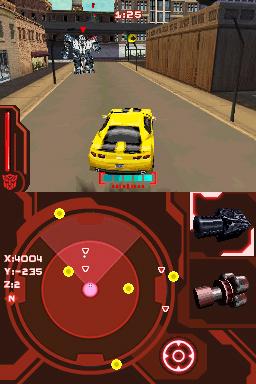 Written by Sean Colleli on 9/26/2009 for DS
More On: Transformers: Revenge of the Fallen
I try to remain as objective as I can during a review. This means throttling back on the fanboy when I’m reviewing a new Metroid game, but it also 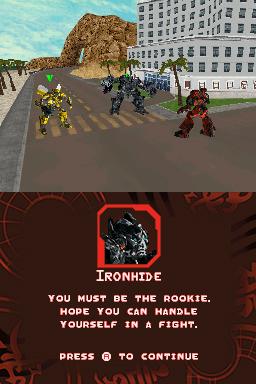 means keeping the bile and vitriol in check when approaching something I already have sufficient ire for. For example, I knew going into this review that Transformers Revenge of the Fallen the movie was Michael Bay’s crowning insult to the art of filmmaking, packed with jingoistic patriotism, superfluous mind-numbing action sequences and a pair of borderline racist robot caricatures. This did not mean that any games based on the film were automatically terrible, so I went in blank on both the autobots and decepticons versions of the game.

And they really aren’t that bad. Without all the Shia LaBeouf and military fetishism and extraneous human drama, both Transformers sequel games can focus on the most important part of Transformers: giant robots beating the daylights out of each other.

The meat of the game is in its single player campaign, and after a brief tutorial you take control of a “protoform,” a kind of blank slate transformer. In the autobots version you get recruited by the good guys, and in the middle of a battle you are tasked with choosing a vehicle form and hitting back at the decepticons. There are three vehicle types to choose from and they dictate what style of character you play for the rest of the game—light, medium or heavy. The only permanent change out of this choice is how fast your character moves, but other starting statistics, such as health, accuracy and melee damage, can be upgraded later on. The game is fully 3D over-the-shoulder, but the levels aren’t free-roaming like the first Transformers game on DS. This actually keeps the levels focused, and while forcefields will pen you in to a specific area, there is plenty of space to wreak havoc.

The game has a decent RPG mechanic that lets you upgrade attributes by collecting and spending the “energon” that falls from dead enemies (yeah I laughed at the name too). Scattered throughout the levels are extra weapons and hardware you can install to make your guns and rockets strike cleaner and your punches hit harder. This lets you customize just what kind of a protoform you are, and it makes multiplayer a lot more interesting.

The vehicle side of things is a little less involved than it was in previous Transformers games. Choosing your class does dictate whether you turn into a sports car or a beefy SUV, but your car form is more for quick transportation than combat. While you can still transform at will, you’ll probably play most of the campaign missions as your protoform. There are a couple special missions that let you play as a flying Autobot but these are spent entirely in-flight. Bonus missions are unlocked where you control the established heroes of the movie like Breakaway and Optimus Prime, but they are usually a break from the story, like a race or high score challenge.

Revenge of the Fallen sports impressive visuals for a fully 3D DS game. Most of the levels have that minimalist, PS1-esque appearance but the framerate is solid and the robots themselves have complex geometry and animation, especially for the iconic transformations. Of particular note are the 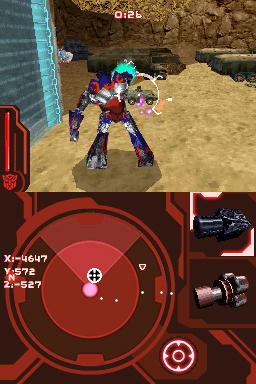 pretty explosion effects—any game based on a Michael Bay film MUST have respectable explosions!—but I was happy to see that the action was always clean and measured, not the particle-choked melees of the films that always end up with the camera focused clumsily on a robot’s crotch.

While the single player is a surprisingly elegant and straightforward actioner, the multiplayer is where innovation starts to show up. The actual mode is pretty limited—just deathmatch and only a handful of basic settings—but it does import your character from single player. As in solo this determines how you play, and you’d better be well equipped and upgraded too; going in with your starting stats and weapons is suicide when playing against people who have leveled through the solo campaign. This adds a nice element of strategy but also precludes you from jumping right into multiplayer, unless you want your essentially naked protoform to fight fully-loaded and leveled opponents. I think it’s a tradeoff most players won’t mind. The multiplayer also works between both the autobots and decepticons versions of the game.

Deathmatch only supports four players over ad-hoc wireless, but the game does have an ambitious little online mode called Battle for Earth. This feature lets you log on to a server and download new missions and challenges every day. A set of missions will be available for a number of days and once that period ends a new set is uploaded to the server. Each missions grants you bonus energon and there’s even a ranking system and of course, leaderboards to go with it. These missions use assets and levels already on the DS card so there isn’t any new content per-se, but it is a creative approach to DLC and goes a long way toward extending the replay value, not to mention building an online community around a Nintendo-platform game which is practically unheard of.

This is a cool “parallel universe” take I suppose, but don’t think for a second that you need to buy both games to get the whole picture—you’re playing essentially the same game in both versions, it just comes down to who you want to play as, good guys or bad. I would’ve preferred that they do a combo game like the one for the first movie, with different missions for both factions and both a good and evil ending. The two-game approach feels like a dishonest double-dip, to trick unwary customers into buying basically the same game twice.

That said I came away from Transformers: Revenge of the Fallen surprised, in both versions. The game is by no means perfect and the action is on the whole routine, but the solo campaign is fun and challenging and the multiplayer actually innovates a bit, especially with Battle for Earth. Revenge of the Fallen isn’t a bad action title if you’re craving one on the DS and it’s considerably better than most licensed games ever are. Just make sure you know which side you want to fight for, unless you’re a real diehard fan and are willing to plunk down the cash for both versions.
Transformers: Revenge of the Fallen on DS is a whole lot better than the terrible movie and a decent action game in its own right. The online Battle for Earth mode offers new content for months to come, but don’t be tricked into buying both the autobots and decepticons versions of the game—they’re basically the same thing with a different coat of paint.