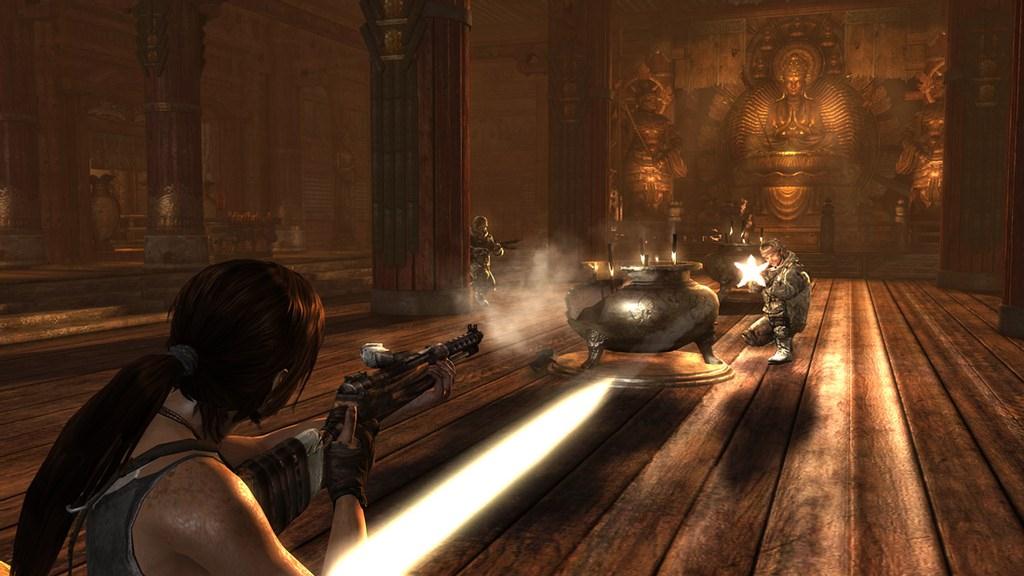 Written by Cyril Lachel on 3/5/2013 for 360
More On: Tomb Raider
When first demoed for the press, Tomb Raider's brutality took many by surprise.  The tone was considerably darker than past installments and it felt like the game was taking some sort sadistic pleasure in the torture of a young Lara Croft.   The whole thing left me extremely nervous about the direction the series is headed and hoping for the best.

It all begins with a nasty shipwreck in the middle of the ocean.  The good news is that Lara has survived and washed up on what looks appears to be a deserted island.  Unfortunately she's not alone.  Lara is immediately kidnapped and strung up from the ceiling.  But don't worry; Ms. Croft knows how to get out of sticky situations.  It doesn't take long for this iconic character to get free and begin solving the many mysteries of this island.

Her first objective is to find the rest of the survivors, hoping to work together to figure out a way off this stormy rock.  Lara quickly realizes that this is no ordinary island; it holds a series of secrets that verge on the supernatural.  To make matters worse, the island doesn't seem keen on letting people leave.  With no way off the island and no communication to the outside world, Lara Croft is officially lost.

The well-paced story sends our hero all across the island fighting "Others," battling the elements, climbing huge mountains and, yes, raiding tombs.  You'll visit the rocky shores, where you can see wrecked ships dating back hundreds of years.  There's an old military base on the island, a relic from decades ago.  The shantytown suggests that people may have lived here for a long time.  And don't forget the monastery in the mountains that may hold the answer to the island's power.

But even with the odds stacked against her, Lara knows a thing or two about surviving.  She has all the right moves and plenty of firepower to get out of even the hairiest situations.  She starts out the game with a simple bow and arrow, before eventually picking up handgun, assault rifle and shotgun.  Each of these weapons can be improved and upgraded over the course of the 12 hour adventure, giving the player more than enough incentive to loot every single body and pick seek out hidden treasures. 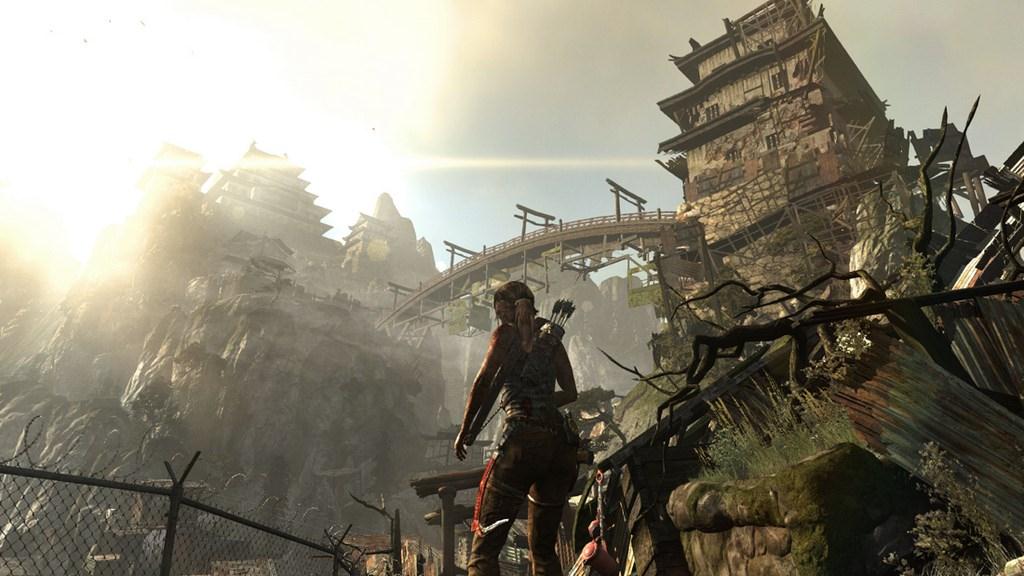 Most weapons have a dual purpose.  Not only can you use them to kill "Others" and wild animals, but they can also be used to access new parts of the island.  The bow and arrow, for example, allows Lara to create zip lines and open certain types of doors.  The shotgun will allow you to break down specially marked walls.  The assault rifle can be equipped with a grenade launcher, which can clear rocks to create new paths.

While older installments focused on complicated puzzle solving, this reboot is all-out action.  In that sense it feels more like a Hollywood blockbuster movie, not unlike Naughty Dog's Uncharted series.  In fact, Tomb Raider takes more than a few cues from Nathan Drake's adventures, making this a much more cinematic experience.  As somebody with only a mild interest in the franchise, I found this game to be compelling from start to finish.  However, I can see how some loyalists may be turned off by the emphasis on explosions over puzzles.

No matter where you come down on the change in focus, I'm pretty sure there will be no arguing over the way Lara controls.  For the first time ever, I had a genuinely good time playing as the buxom adventurer.  The mechanics are forgiving, so you'll rarely miss a jump or accidentally fall off an edge.  In fact, once you figure out what she can do, Lara becomes something of a superhero. 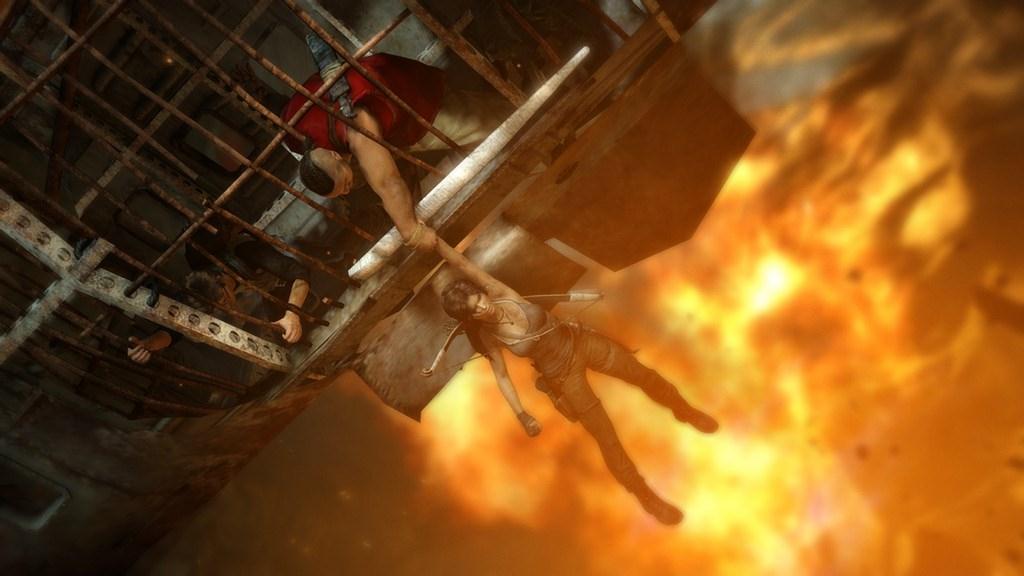 For as linear as the story is, there's a lot of incentive to explore every inch of this mysterious island.  While not an open-world sandbox game, Tomb Raider does allow the player to jump back and forth between the different base camps.  There are hidden treasures scattered all throughout the island, as well as journal entries that further expand on the story.  There are also a number of optional tombs to raid, each offering a unique puzzle that evokes the spirit of the original entries in the series.

I suspect most people will be too busy marveling over the stunning visuals to notice the lack of complicated puzzles.  The island's many weather effects are simply breath-taking.  And it's not just the way the backgrounds look, it's how Lara's animation seems to be impacted by the island storms.  There were times when I had a hard time believing that these graphics were coming out of my eight year old Xbox 360.

But as good as the visuals are, it was the story that drew me in.  I desperately wanted to know the history of this island and why it won't let people leave.  I needed to know more about the "Others" and how they came to this island.  Forget the kidnapped survivors, I want to know more about this hatch in the middle of the jungle.  The entire mythology had me hooked right from the get-go, and I wasn't disappointed with the answers. 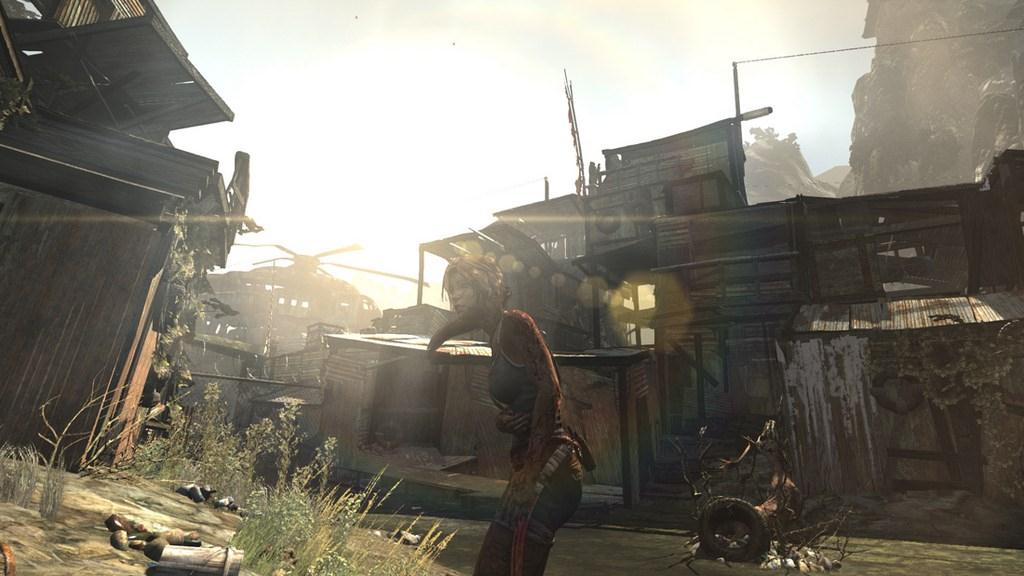 A lot of the story elements feel like they came straight out of the TV series "LOST," to the point where I started to wonder if a smoke monster might show up.  This doesn't come as much of a surprise, as many of the game's elements feel like they were lifted directly off of other games and movies.  I can draw a straight line to not only Uncharted, but also Batman: Arkham Asylum, Resident Evil 4, Assassin's Creed, BioShock and even the 2005 horror film, The Descent.

There came a point where none of that bothered me.  Even if few of the elements are original, they come together in a fresh way that kept my interest for more than a dozen hours.   The pace is constantly moving and I couldn't wait to see what big set-piece came next.  And even when I uncovered all of the answers, I still needed to go back and raid every tomb and find every treasure.

I wasn't nearly as keen on playing the multiplayer mode.  This is an eight-player mode that feels tacked on for good measure.  It is a perfectly passable imitation of the Uncharted multiplayer modes, featuring teams trying to complete tasks and thwart the other team from finishing their own set of objectives.  There are a bunch of cool looking levels based on parts of the single-player campaign, as well as dozens of characters to unlock.  It's a fun diversion, but certainly not the draw of Tomb Raider.

Crystal Dynamics has finally delivered a game worthy of Lara Croft.   Tomb Raider is a great mix of action and exploration, complete with a story I actually cared about.  This is a harrowing adventure that will keep you guessing right up to the very end.  I went in expecting a great looking game, but came out with so much more.  This is the best thing to happen to Tomb Raider in two decades.
After nearly two decades, Crystal Dynamics finally gets it right. Tomb Raider is an action-packed thrill ride full of amazing set-pieces, sharp writing, a fun science fiction story and tons of enemies to gun down. Tomb Raider is a game worthy of the Croft name!