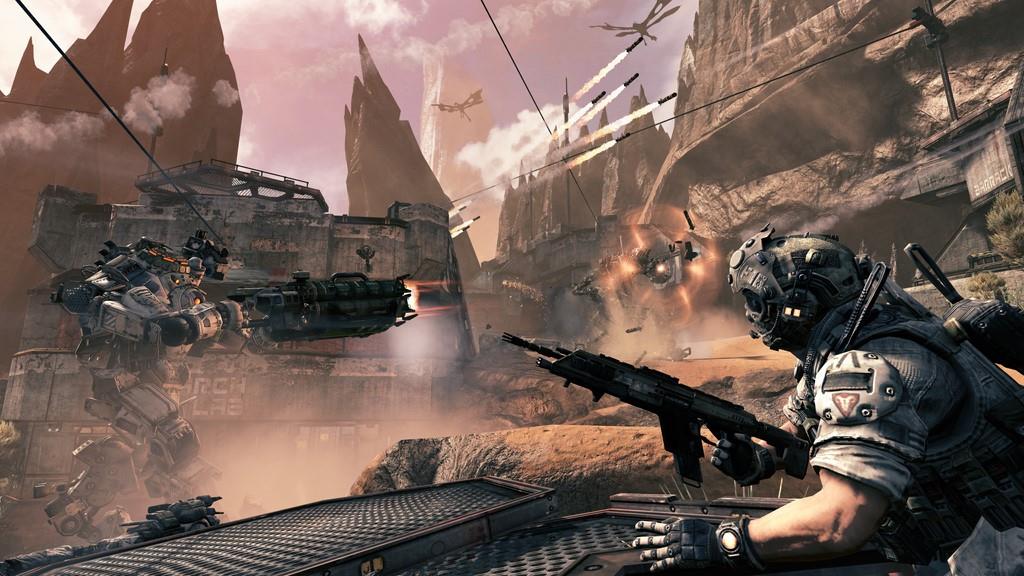 Written by Charles Husemann on 4/15/2014 for XBO
More On: Titanfall

In the late 1980’s, Ferrari released the F40, one of the greatest sports cars ever to hit the road. With a singular focus on speed, the car was in it’s own class on the track. However, while the car came with a $400,000 sticker price, it didn’t come with amenities like power windows, a stereo, or even a glove box. No, the folks at Ferrari were focused on one thing, performance, and in that regard the car was a huge success.

Titanfall is a lot like the F40 as the game was born of the singular vision: creating the ultimate online multiplayer game. Respawn’s first game doesn’t feature an offline single-player campaign, Kinect features, or any other AAA trappings as Respawn focused solely on creating an incomparable multiplayer experience. The question now is if they succeeded in their quest.

Set in the distant future, Titanfall has a bunch of sci-fi stuff about mankind reaching to the stars and colonizing a distant area of space known as the Frontier. It’s here that two groups, the corporate IMC the rebellious Militia, are fighting for control. Why are they fighting each other? To be honest I’m not sure, as the motivations of either side aren’t really discussed, and having the two factions feels largely like an  excuse to bifurcate players into two teams. I hope Respawn and EA launch some kind of transmedia strategy that explains things a bit more, as it feels like there’s a well thought-out universe out there, but it doesn’t come across.

The game does have an online campaign mode which is a meaty chunk of narrative served over a series the game's multiplayer maps. This does help provide a bit more detail into Titanfall’s story. Unfortunately, this story is told via short video clips during combat, making these elements difficult to hear and process. It’s a lot like trying to have a conversation with your significant other while doing something else; you catch the gist of what is being said but the fine detail is lost. You will want to play both sides of the campaign as that is how you unlock the two extra Titan chassis.

Plot aside, the team at Respawn has crafted a masterpiece of multiplayer gaming. The game breaks some new ground and extends and enhances existing tropes of the genre. Respawn has also built a game that is accessible to players of all skill levels.

There are five gameplay modes that you can play on one of 15 maps. The modes are:

The secret of Titanfall isn’t the titular Titans but the fleet-footed pilots controlling them. While the Titans are mountains of steel brimming with firepower, they are slower and limited to moving along the ground level. Pilots, on the other hand, are fast and nimble and able to access the entire map, accessing vast vertical areas on each map. In a one-on-one battle on even ground, the Titan will win 100 percent of the time; but if the pilot is smart and can get moving, the odds shift to about fifty-fifty. 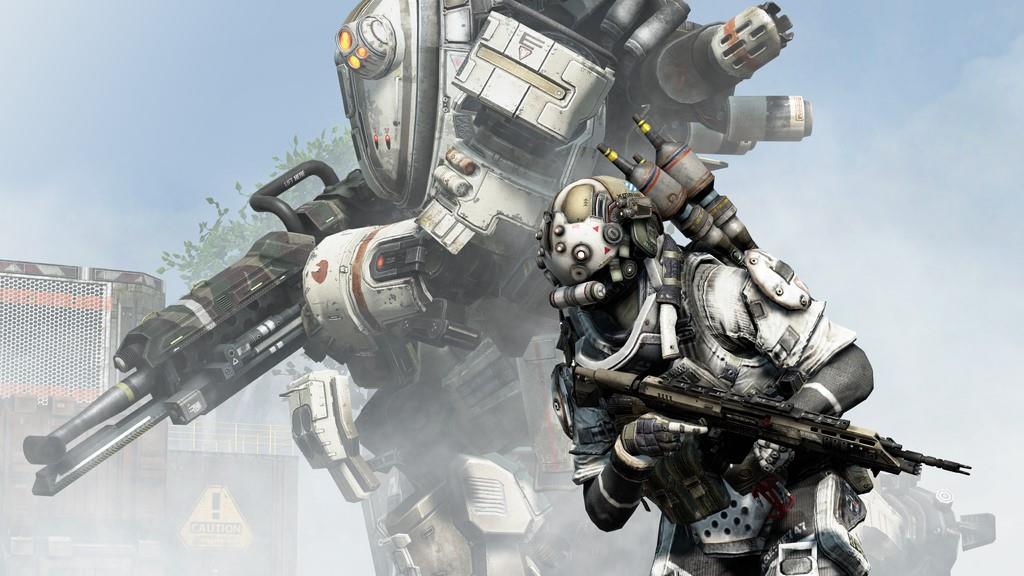 The only downside to this agility and verticality is that the maps are clearly designed to highlight this ability. Remember the abundance of “chest high walls” in the Gears of War franchise? Well, Titanfall has lots of “conveniently destroyed walls” that provide too-obvious pathways for pilot parkour.

One thing that makes the Titans interesting is that you never have to pilot the Titans unless you want to. Your Titan can be set to either follow you or guard an area—which allows players to employ some tactics. There’s nothing like using your Titan as bait in a trap or having it defend key areas while you are out capturing points/flags or farming minions for points.

Another impressive Titanfall feature (that we’ll see copied in FPS games within the next two years) is how the entry and exit for levels is handled. Unless you join a game mid-match, you are treated to a fun dropship entry to the level. It doesn’t sounds like much, but the feeling of dropping into the game like this, coupled with the excellent militaristic music, really sets the tone for each match.

Exiting a level is also a treat. At the end of each level, the losing team has to escape via a rescue ship. This means that there’s a last-minute scramble to escape or hunt people down, which adds a lot to the experience. Instead of the usual “GG” when a game ends, there is a wild hunt and chase at the end of each level. This is also where your skills using the parkour system come into play, as the rescue ships only pick troops up on the top of buildings. As an added bonus, you earn extra points if you escape, which can help soothe the wounds of losing a round. 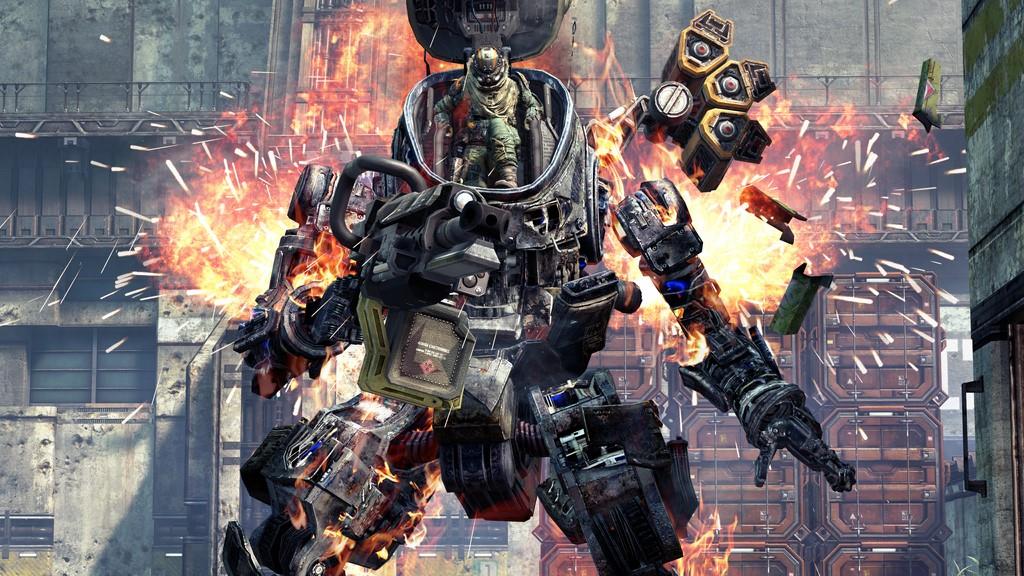 There is genuine magic in hearing “Standby for Titanfall” after summoning a Titan and then watching a giant robot exoskeleton fall from the sky for you to ride around in. It’s a moment that continually sent small shivers of nerd delight up and down my spine.

Titanfall is also exceedingly accessible to players of all skills, and that’s apparent in every component of the game. Weapons and powerups are built with the newer player in mind as the game focuses on splash damage weapons and abilities that even the playing field a bit. That’s not to say that better players won’t dominate a match, but the game flattens out the curve a bit.

This is also seen in how Titans are handed out to players. Everyone starts with a two-minute counter to get their Titan, but that counter is lowered by damage or killing opponents. It’s a well-executed system that balances the game out without making it too easy.

The game also features "burn cards" which give you special abilities for the duration of one life. The cards are earned via challenges, and you pre-select them going into each match. This creates all kinds of additional strategies for players as burn cards provide for things like cutting down the build time of your Titan, experience bonuses, special abilities, and more powerful weapons. 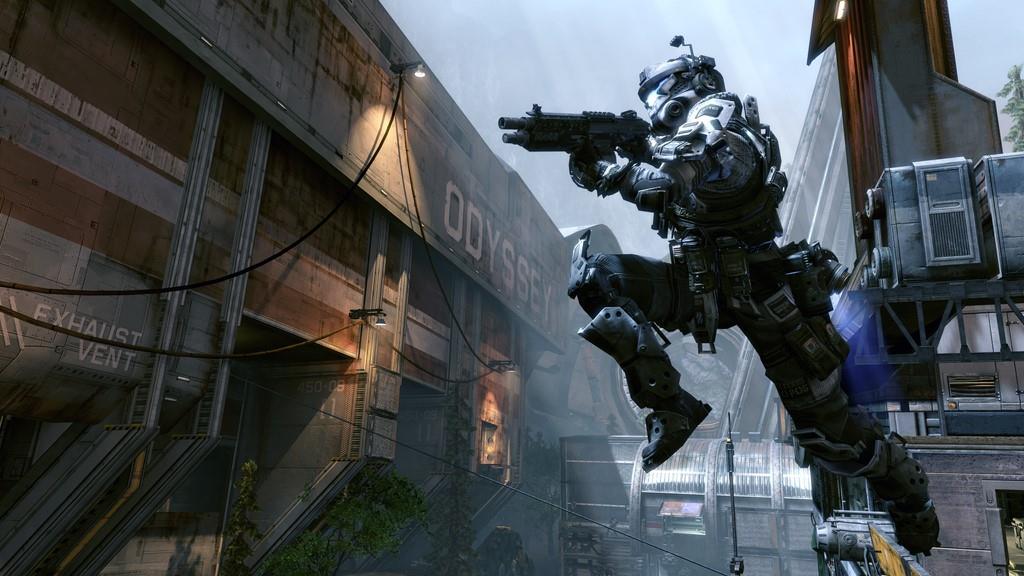 Speaking of experiences, you’ll find a nice progression tree in the game. Each level of advancement opens up new options for upgrading either of your personal weapons, abilities, or the abilities and weapons available to your Titan. This is where the Respawn guys show off their knowledge of the multiplayer world as you are constant striving to get to the next level to get that cool unlock.

Graphically, Titanfall isn’t exactly pushing the limits of the Xbox One, but if you’re stopping to gaze and look around the levels this probably isn’t the game for you. Sure the game isn’t as graphically jaw dropping as Killzone: Shadow Fall, but with action this fast, I don’t think most players will notice.

The game does have a few weak spots, though, with the largest being that matchmaking seems a bit off. There are a lot of times when I would be in a match where one team had a clear advantage over the other in terms of the number of experienced players on a side. There’s nothing like seeing four multi-generation players (Titanfall’s version of Call of Duty’s prestige system) on one team while the others is stocked with single-digit-level players. This wasn’t an isolated case, as I saw this happen over and over again, which got frustrating over time. Respawn is working on this but it's still an issue. 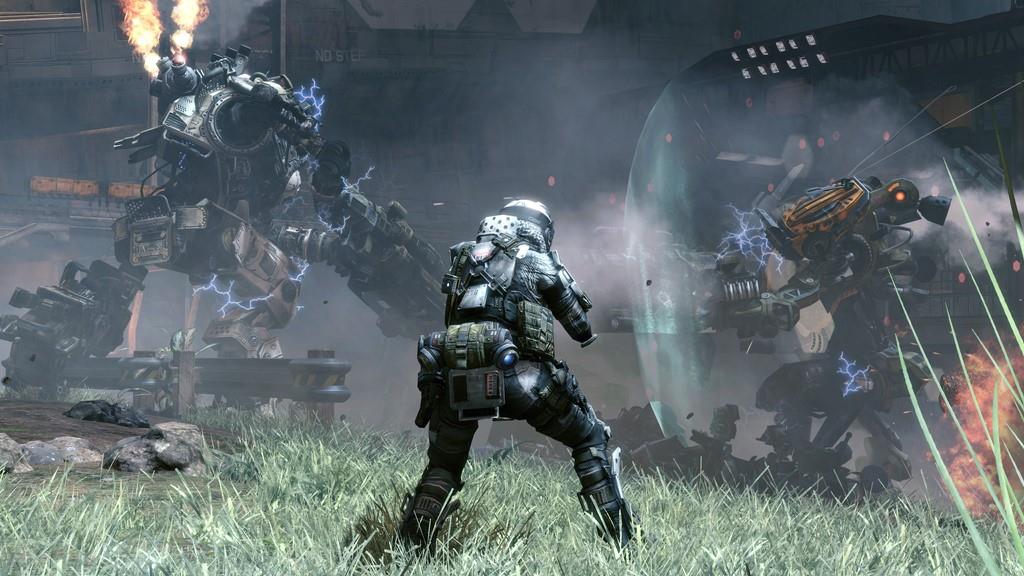 Titanfall has also been hit with a few minor server issues since launch. Nothing on the scale of issues that other online games have hit, but there have been two occasions when I went to play a game and simply couldn’t. The game is also hampered a bit by the still-awkward Xbox One party system, which is a key component of an online experience like this. Both of these I would expect to dissipate over time.

The final nit is the constant stream of chatter from your compatriots back in orbit who let you know when you are going to get a new Titan, if you’re close to a capture point, if someone has picked up or dropped a flag, whether or not you are winning the match, or a variety of other information of varying levels of usefulness. (I think I got an update on my stock portfolio at one point). There are times when I wished they would simmer down and let me focus on not allowing opposing players to ventilate my body any further.

At the end of the day, Respawn has a very respectable and very fun game on their hands. Sure the hype train probably got away from them a bit, but the game is still a lot of fun and something that people are going to be playing for years to come.

An intensely fun multiplayer game that is accessible and fun for everyone. Not perfect, but that's what sequels are for.