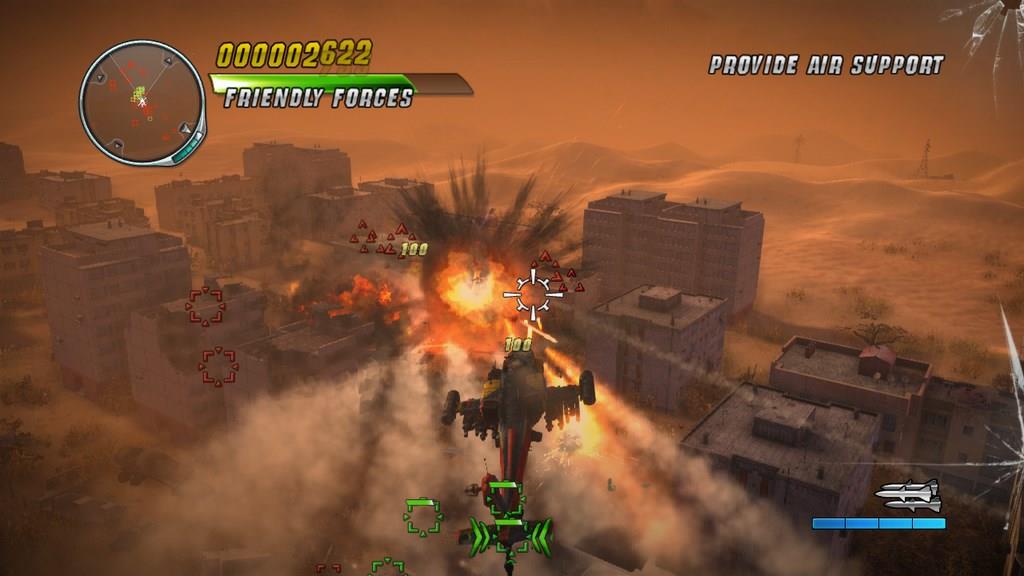 I have always suffered a personal dichotomy when it comes to assault helicopter games. While I often say that I want something as close to a realistic combat experience as possible, I always seem to end up hating the result. Why? Well, it all comes down to this: helicopters are very hard to fly. Add to that the hectic, frantic, disorienting, and violent nature of down-in-the-weeds armed conflict and you very quickly realize that the last thing you want to have to worry about is the operation of a very complex machine.  When you find yourself dying more times due to poor flying skills than as a victim of enemy fire, well, it gets a little frustrating. While there is a lot to be said for the accomplishment of mastering a complex, difficult fighting machine, you can’t escape the fact that sometimes you just want to blow stuff up.

And for that purpose, we now have Thunder Wolves from Most Wanted. Thunder Wolves makes the actual flying of the helicopter as simple as can be and allows the player to focus on what’s important: firing as many projectiles as possible and destroying just about anything on the ground or air. Bouncing off of landscape or man-made objects has little to no effect on the helicopter, and at the lesser difficulties even a plethora of enemy counter attacks can be brushed off as inconsequential irritations.  This is arcade action at its best! 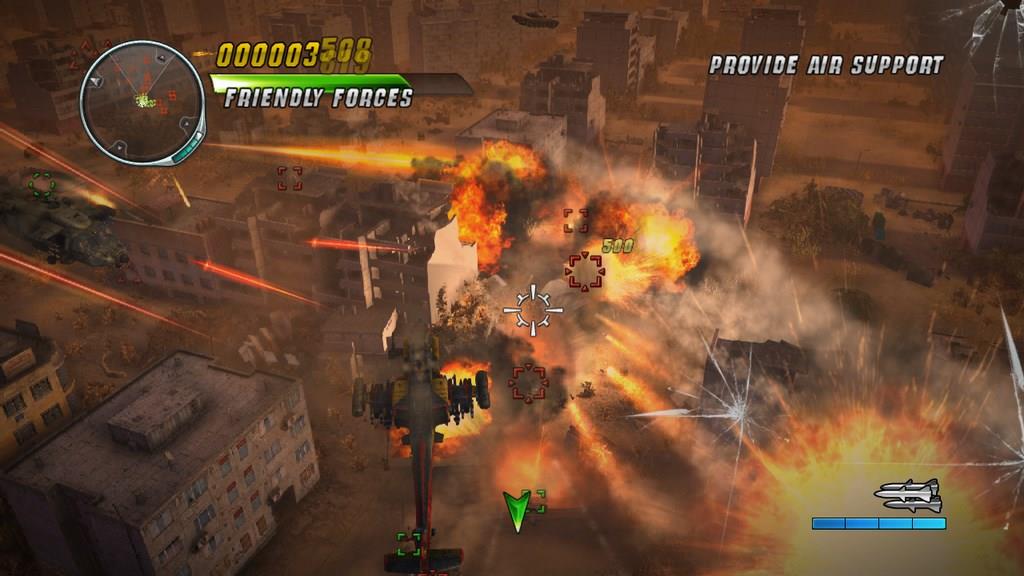 But make no mistake: this is not necessarily a pure run & gun (or the aerial equivalent) experience; the enemies are plentiful and just as with your helicopter, their pile of ammunition is inexhaustible. They will throw everything they have at you and although your helicopter can absorb quite a bit of abuse, it will eventually succumb to the onslaught.  The smart player will soon adopt a more measured pace when approaching a target and use a combination of distance and stealth to pick off the more dangerous targets before making a full-blown assault.  This is particularly fun when flying a helicopter equipped with user-guided drone missiles. In fact, the recharge time for those missiles is lengthy enough that they become pretty much unusable once the point of massive enemy resistance is reached because guiding the missile takes away the player’s ability to defend the parent chopper against enemy action, so they are best utilized in a stand-off mode.

The variety of missions in the campaign mode is quite broad. While the story behind the campaign is, as can be expected of an arcade-style game, easily ignored and not germaine to the overall experience, each individual mission has a character of its own. Some missions are just plain shoot-’em-up endeavors wherein your job is to simply annihilate an entire area or facility. Others have you stand off at a distance and use a sniper rifle to pick off soldiers while hostages try to escape. While all of the missions are more or less linear in nature, there are some that are completely on rails. In those missions, you are not responsible for flying the helicopter; you’re just acting as the gunner. It is in these missions that a single player gets a feel for what the co-op multiplayer experience is like. For even more variety, there are even missions where you aren’t even in a helicopter at all and instead find yourself driving a tank or piloting a drone helicopter. 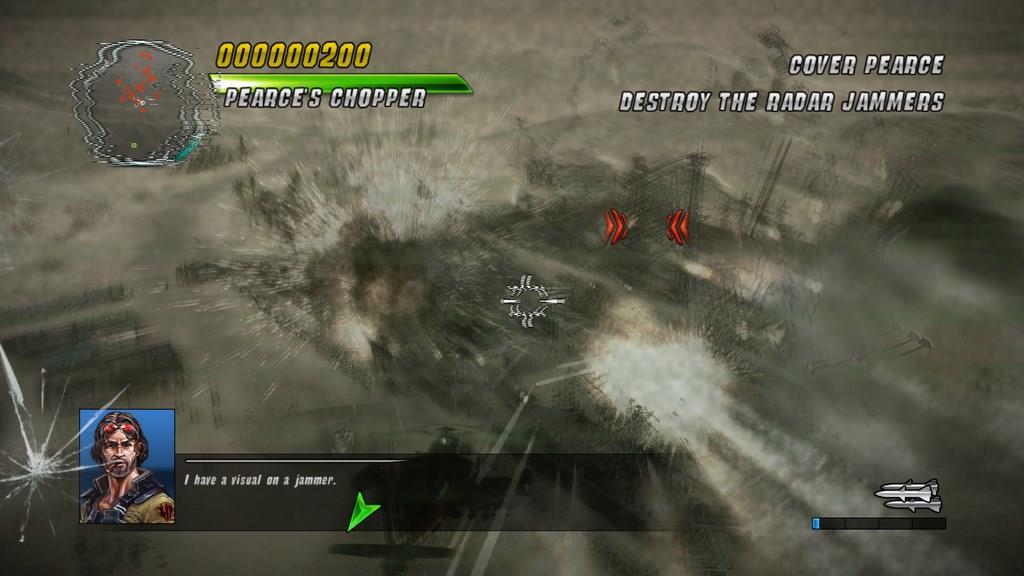 Even with a very easy to fly mount and a relatively high threshold of pain, the fighting can get very hectic and at times become overwhelming. It is at these times that the co-op multiplayer mode really shines. In the co-op mode, one player pilots the helicopter and controls the defensive systems (flares, for the most part) while the other is responsible for the turreted machine gun and the rockets. The pilot also has a machine gun, but it is fixed aim. This adds an interesting element to the experience because it creates the need for good communication between the two players. The gunner can only see and target what is visible on the screen, but it is the pilot who decides where to “look.”  In a scenario in which the pilot is actively using his gun, it is possible (likely, actually) that keeping the view facing forward to bring the fixed gun into play is hiding a more lucrative or dangerous target from the gunner. The gunner can also be the cause of self-immolation should he choose to fire off a user-guided missile in the heat of a battle; the pilot loses the ability to dodge incoming fire during the time that the missile is in flight. The competing demands inherent in this mode of play can result in some rather heated wordplay between the pilot and gunner, to say the least!  The thing is, though, that this co-op mode is where Thunder Wolves really comes alive and delivers massive amounts of fun!


If you can ignore the repetitive and somewhat irritating voice comments from your virtual co-pilot (“Get some!”, “I see dead people!”, etc.) and don’t mind that you would experience more accurate flight physics by riding in an elevator, Thunder Wolves delivers gobs of good, wholesome destruction by the barrelful. It’s easy enough that anyone can pick up a controller and make good progress through the game, but also provides just enough reward for more sophisticated tactics to keep it interesting. Invite a buddy over to play in the co-op mode and it gets even better!  For a reasonably priced title, Thunder Wolves proves to be a worthy choice for those days when you just want to make a lot of things explode into dust.
Thunder Wolves is a great shoot 'em up with a hint of tactical finesse required now and then. It certainly packs quite a bit of bang for your bucks. Grab another controller and a good friend to have even more fun in the co-op multiplayer mode.