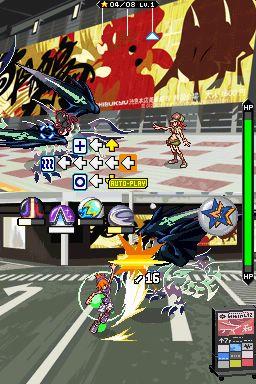 The World Ends With You

Written by Matt Mirkovich on 5/28/2008 for DS
More On: The World Ends With You
If a year ago someone were to tell me that Square Enix was making a new IP, amidst their constant milking of Final Fantasy 7, I would ask the person to share whatever they were on. Yet here we are now with The World Ends With You, the first fresh and original title the company has put out in a long while. It is fun, imaginative, carries a good story, and makes excellent use of the DS mechanics. Use of the dual screen is crucial in a game’s success; and The World Ends With You is able to hook the user with a fun and engaging battle system, and general gameplay that quite simply, works. Considering that this is co-developed by Jupiter who’s recent efforts included the Kingdom Hearts: Chain of Memories spin-off which to put quite bluntly wasn’t very good, this game could have been a disaster, but I am more than happy to report that The World Ends With You is one of the best new and original titles Square Enix has produced since their merger years ago. I haven’t been this compelled to play one of their products over and over again since Chrono Trigger. 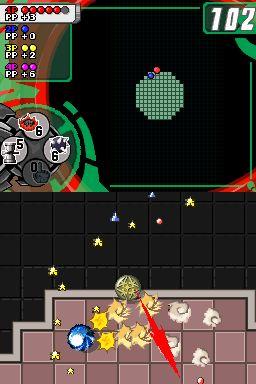 The World Ends With You stars (fresh from Tetsuya Nomura’s closet of blue and zippers) Neku, a dislikable ass who wants nothing to do with the people of the world. One day he awakens in the middle of the crowded streets of Shibuya to find that he has no memory, and is now caught up in a game of life and death, populated by “Reapers,” where the fear of “erasure” is always just around the corner. What this means is that Neku has to complete a new task every day for the next seven days if he wants to survive. And what fun would it be if the tasks were simple? You’ll constantly be kept on your toes by “Noise,” the thoughts and conflicts of people wandering around Shibuya. Alone, the Noise cannot be defeated, so Neku must team up with another player of the Reaper’s Game, a young girl named Shiki who constantly clashes with Neku’s desires to go it alone. Neku will also run in to other player’s of the game, each with their own personal demons to contend with.

There is a little bit of voice acting here and there, but mostly used to convey emotion, there aren’t really any spoken lines of dialogue, just a whole lot of dialogue boxes and emotive art. The music is one of the major high points of the title, featuring a number of tracks from Japanese pop label Avex Trax, and there is a great deal of it, so while battle themes may repeat, they are constantly cycled to prevent them from getting too repetitive.

The World Ends With You is a great looking title for the Nintendo DS. Easily rivaling some of the Castlevania titles in terms of aesthetics, The World Ends With You has smooth animations, vibrant characters, and quite a bit of style to it. The amount and variety of art that is used for all of the various articles of clothing and pins is quite astonishing. For a Testsuya Nomura designed group of characters, he sure did dial back the dark colors and zippers that were bountiful in Kingdom Hearts and Final Fantasy.

An RPG needs to have an engaging and fun battle system if it wants to succeed and The World Ends With You pulls it off quite well. You attack by equipping pins to Neku, and by performing various stylus motions from tapping the screen rapidly to blowing in to the microphone Neku will perform a variety of attacks from shooting fireballs from his hands to hurling lighting and pinking up and tossing objects. It takes a little getting used to as every pin’s effect is different. There is a very steep learning curve to combat as you are required to play for Neku and his partner at the same time. To make things tougher, the HP is shared between the two characters. The bosses function the same way, but expect to suffer a few early deaths trying to get the hang of the battles. The upside to this is that you can change the difficulty of the battles to suit your play style, and if playing two characters is too much to take on you can have the computer control your partner. As you progress you can unlock higher difficulties that will yield better drops from the enemies, or you can simply lower your HP on purpose to increase a drop rate.

Enemies drop pins that can lead to new skills or can be traded in for cash, or when you head to shops you can trade pins in for quest items. Shopkeepers aren’t too keen on Neku at first, since they only like patrons who are willing to spend a ton of dough in their stores. As you make friends with the store owners you can gain special abilities from the clothes you wear. In a slight twist you don’t use typical armor; instead you pay attention to the fashions that are popular in Shibuya. Equipping the right pins in the right areas will reward you by dealing extra damage, or if your brand of pins is unpopular you’re going to be much weaker. You can augment the popularity of a certain brand by equipping a specific brand and rolling in to battle. But before you do make sure you eat some food so you can gain stat boosts. After a certain number of battles, food is digested and the stat boost is permanently applied to your character. However you are limited to the amount of food you can eat per day, as in twenty four hours. 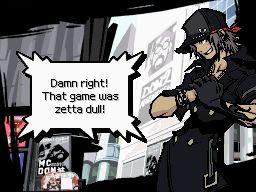 In a bizarre twist The World Ends With You actually encourages you to take breaks from the game, and rewards you with experience for your pins. Pins level up from four different sources. There is combat experience, which you get from regular battles, shutdown experience which comes from leaving the DS off, which lasts up to a full seven days. You’ve got mingle experience which comes from meeting other DS gamers who are using a wi-fi signal, or if you don’t have that kind of exposure you have a random chance of running in to an “alien” which is worth a significant amount of mingling experience. The final way to level up your pins is by playing a fun and optional mini-game called Tin Pin Slammer which plays like a crazy modified game of marbles.

The World Ends With You is quite the surprise game considering how little I had heard about this. For a new IP I didn’t have much to expect and I came away pleasantly surprised. It’s got a slightly difficult learning curve, but once you get the hang of the game you’ll find it has a fun battle system and a pretty good story. The World Ends With You caught me off guard and I can’t recommend it enough, it also has an extensive end-game that will keep you busy long after completion. Don’t let The World Ends With You pass you up as it is easily the best DS title released in the last two years.
It's not the end of the world, and Matt feels fine after getting his hands on Square Enix's latest DS RPG.