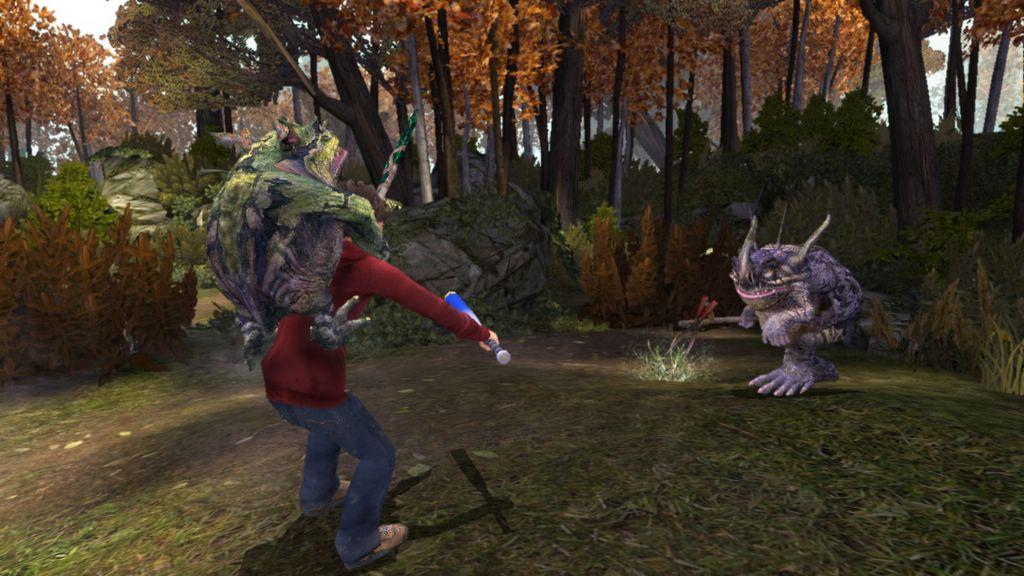 Written by Sean Colleli on 3/17/2008 for 360
More On: The Spiderwick Chronicles
It’s that time again folks! Movie tie-in time! Can you guess what the source material is this time? It’s Spiderwick Chronicles! Yes, after a number of media permutations, this modern fantasy adventure has arrived on the Xbox 360, just in time to coincide with the pre-spring blockbuster. I’ve spent the last couple of weeks braving the unseen realm of magic and mythical creatures, and emerged…mildly entertained. Spiderwick Chronicles treads a lot of old ground, and I found myself in need of highly caffeinated beverages to make it through conscious.

Spiderwick Chronicles follows three siblings: twins Simon and Jared and their older sister Mallory, as they explore their great uncle Arthur’s mansion and discover his field guide to magical creatures. Soon they’re catching fairies, solving family history and trying to keep the field guide out of the hands of ogres and goblins. In the game, you play as each of the three kids, and occasionally as their small friend, Thimbletack. The game plays out as a pretty standard adventure, which means all of the gameplay tropes are included and some are used a bit too much.

The game starts out with the usual tutorial. As the intrepid Jared explores the mansion, the basic controls are explained and you get a general idea of what’s going on. Jared finds the field guide and learns that the mansion has a mischievous boggart in it, and that he can turn the boggart into a helpful brownie by giving it honey. To do this, you have to find uncle Arthur’s study, smash open an old wall, collect crackers and honey, find a new house for the brownie, and assemble everything in the study. The end result is that you recruit Thimbletack the brownie.

Thimbletack retrieves a special seeing stone for Jared, and tells him to turn it into a monocle so that he can wear the stone and see magical creatures. The game switches control to Simon, who must locate the parts needed to construct a monocle and put them together in the study.

If you’re noticing a pattern here, you aren’t alone. It took me about five minutes to determine that this game was a sequence of fetch-quests, broken up by some combat. Most of your time is spent collecting items around the mansion and its grounds to progress. The only problem is that you can only collect an item once you need it; if you find something important earlier, your character will simply comment idly on it and leave it there. I could deal with this if the characters had a tiny Resident Evil inventory, but they can carry tons of stuff as long as they need it for the immediate objective. 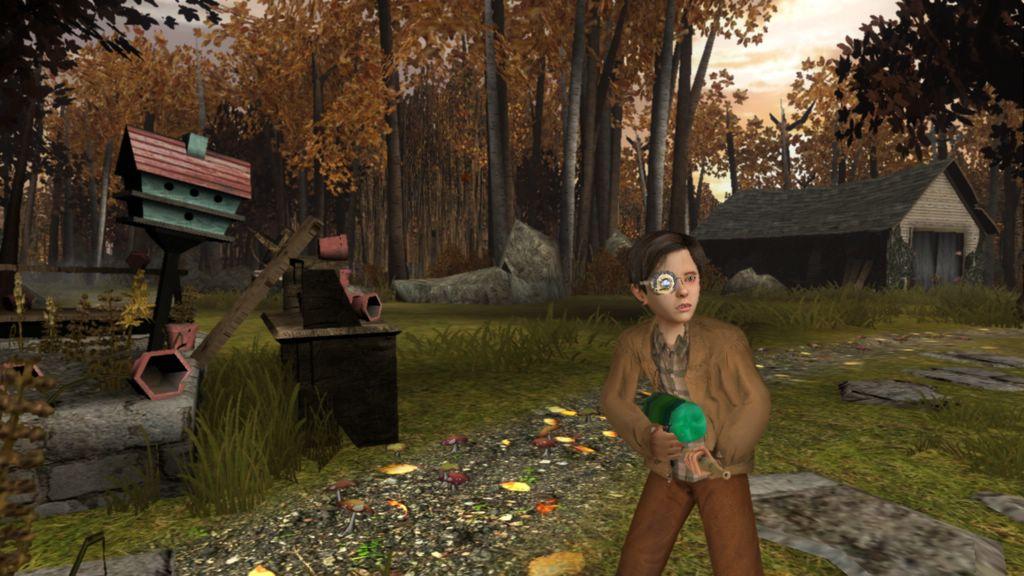 Once the story gets going and all three kids have their main weapons, the fetching thins out a bit and there’s more emphasis on the combat. Jared wields a baseball bat and a slingshot, Mallory is a fencing champion, and Simon is kind of a wimp, so he at first he uses evasive tactics like throwing fruit to distract goblins, but later equips a homemade squirt gun that fires a goblin killing solution. Depending on where you are in the story, the game chooses what character you play as, so you can’t switch on the fly.

Even when you’re out fighting the goblin hordes, there’s still a lot of stuff to collect. The game lets you catch sprites and fairies and store up to three in your inventory. These little creatures have various helpful effects, like restoring health, increasing weapon power, or throwing up a ring of enemy-repelling toadstools. Capturing these little buggers is kind of tricky, as you must nab them in a net and then paint them into the guide before they escape. To paint them you run a small brush around on a page of the guide, using the analog stick to reveal as much of the fairy image before time runs out. This process was kind of cumbersome with the 360’s control stick, and I imagine this is the one part of the game where the Wii version has the advantage.

In addition to fairies, the world outside of the mansion has a whole new set of things to collect, from goblin teeth to metal leaves to ball bearings. At one point you have to retrieve an acorn from a safe. My issue with the fetch-questing was that you were usually looking for something completely arbitrary and mundane. I’m sure these things have some secret significance to the game’s world of fairies, but looking for these doodads got old after a while. I half expected to run into Starfox, as he quested for bafmodads and dumbledang pods.The normal gameplay does manage to entertain if you can endure the persistent scavenger hunt, but the uneven flow is occasionally brought to a screeching halt by Thimbletack’s missions. The mouse-like brownie is the only character small enough to explore tight nooks and crannies, so he spends almost all of his in-game time exploring the insides of the mansion’s walls. As Thimbletack, you must scurry about in the house’s wooden framework, killing roaches and finding the current arbitrary item needed to progress the story.

These levels are tedious in the extreme; the environment consists entirely of dusty wooden paneling, rusted pipes and screws. It’s easy to get lost in the maze of identical corridors and ledges, and each level is started from Thimbletack’s house, which means you have to re-tread the same territory every time. Worst of all, Thimbletack speaks every sentence in rhyme, which is indescribably irritating. After wandering around under floorboards for an hour, listening to him quip his little lines, I wanted to strangle the guy. Once you get to a Thimbletack mission, you can’t continue the main game until you complete it—this was a strong deterrent for me, and made playing something else ( like Halo 3 or Mass Effect) all the more attractive.

Spiderwick Chronicles isn’t all fetch quests and floorboards. There are occasional boss fights, like fencing with the lead goblin, or running away from a rampaging troll. You’ll get the chance to bash up enemies and solve environmental puzzles, but this gameplay is pretty run of the mill for the adventure genre. The combat is hack and slash, so if you know how to button mash you’re set. There are a few multiplayer minigames you’ll unlock along the way, but they don’t use Xbox Live and only two people can play. 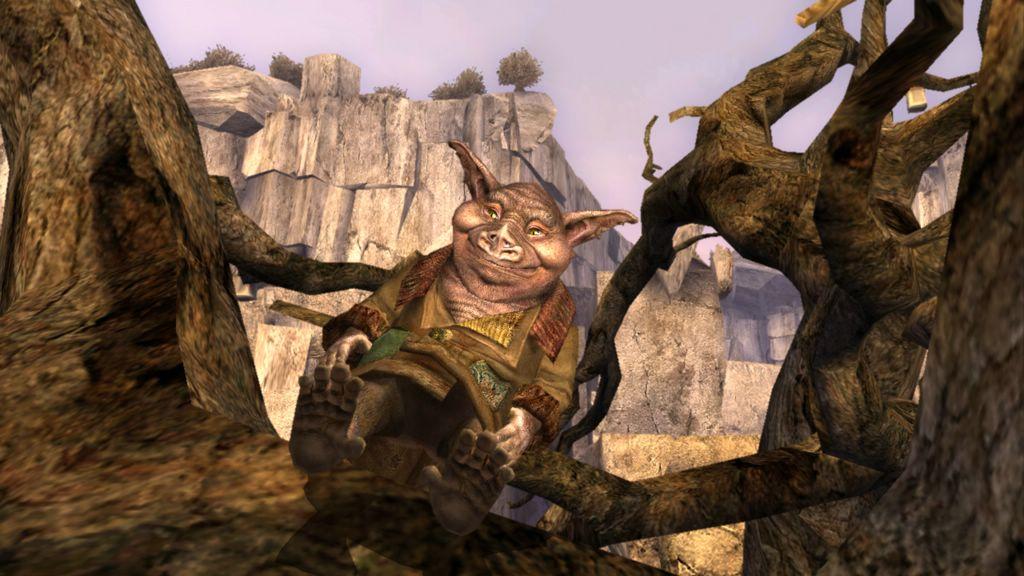 Developer Stormfront Studios chose an interesting art style for the game. Most of the fairies and environments are faithful to their movie counterparts, but the three main human characters are slightly stylized. This difference is more apparent when you compare the in-game cutscenes to the ones taken from movie footage. Whether this was done as a style choice or a way to save development time is anyone’s guess, but it does give the game a peculiar visual presentation. Technically speaking, Spiderwick Chronicles isn’t anything special. The 360 port’s graphics could have been pulled off on the Wii without much trouble, and I suspect that the game looks about the same across all platforms. The game does look suitably nice, the tech is just a little dated, with flat textures, particle effects and no pixel shaders to speak of.

The music borrows thematically heavily from the Harry Potter series, but it has a distinct style that feels more reclusive and mysterious. You’ll be hearing a lot of twinkling chimes and bells, and pieces that fit the secluded, magical theme of the game. It’s all orchestral, which I found impressive for a movie game. Spiderwick’s soundtrack was one of the game’s most thought-out and enjoyable aspects, giving the experience a feeling of authenticity. Kudos to Robb Mills for scoring another original soundtrack that keeps in theme with the movie.

I had trouble coming up with a final grade for Spiderwick Chronicles. It isn’t really a bad game by any definition—it’s well assembled, playable and has strong ties to its accompanying movie. It’s just not a very good game either. You’ll be questing for trinkets most of the time, experiencing the tedium of Thimbletack, or engaging in some boring combat without much variety. In short, if you’ve played an adventure game before, you’ve seen most everything Spiderwick Chronicles has to offer. Kids who liked the movie will enjoy the game, for the time it takes to beat it, but after finishing the story, there isn’t much to hold anyone’s interest or to warrant another playthrough.
Young kids will have a lot of fun with Spiderwick Chronicles, especially if they liked the books or movie. It’s suitably attractive and has tried-and-true gameplay mechanics, but it ultimately amounts to a series of fetch-quests and shallow combat.