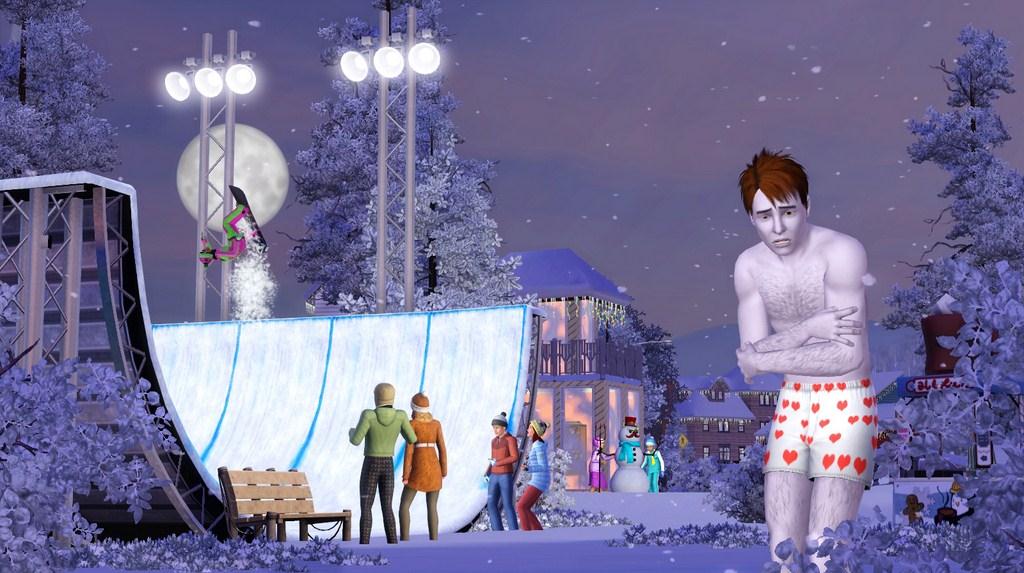 Written by Travis Huinker on 12/20/2012 for PC
More On: The Sims 3 Seasons
The Sims 3 Seasons expansion pack is by far one of the most significant changes to the overall gameplay and appearance of the series with the addition of four seasons and their related weather types and festivals. Aliens from past expansions also make their return with abductions and other questionable acts. Along with a host of new build and buy objects, Create a Sim items, and other various additions, Seasons is one of the more content-rich expansion packs that truly expands the game beyond its foundation.

While Seasons doesn't have many elements in relation to the past Supernatural expansion pack with werewolves and witches, they do share a rather large change to the core Sims 3 gameplay. Fall, winter, spring, and summer each bring with them an assortment of weather types, activities, and seasonal festivals. Nearly all of the weather types have effects on Sims that range from using umbrellas in the rain to bundling up in the new outerwear clothing for colder weather in fall and winter seasons.


Temperature is displayed in a new section of the interface that also includes the number of days left in the current season. Sims can check a computer, newspaper, and television for a weekly forecast of the weather. Weather and temperature can wreak havoc on the unprepared Sims that don't bundle up or ignore the dangers of violent thunderstorms. Sims can now develop colds if they venture outside unprepared for the current weather and temperature conditions. As well, Sims can succumb to being struck by lightning in storms, freezing to death, and heat exhaustion.

Each of the seasons also introduces various activities that range from the ability to create snowmen in the winter to tanning in the summer. Many of these activities contain levels of experience similar to the normal set of skills. Sims will begin as terrible skaters that continually fall to the ground, then progress as experts that race around the rink with the utmost grace. Even additional snowman types are unlocked as Sims create more of them in the winter season. The seasonal-related activities create for a more engaging experience as the gameplay feels more dynamic as new opportunities continually present themselves to players.

The other major addition with the expansion is the distinct festivals that occur in each of the seasons. Season festivals transform a particular park in each world with a variety of activities and objects including skating rinks, kissing stands, photo booths, and tables that host food eating competitions. Participation in activities on the festival lots award Sims with tickets that can be used to redeem seasonal prizes from umbrellas to ice cream treats. Festival lots are often the most populated with Sims going about their routines and participating in various activities. In addition to the seasonal activities, the expansion pack also incorporates special holidays that mirror their real-life counterparts like Halloween and Valentine's Day. New costume and gift-giving parties also join the group of added social activities that relate to the current season. 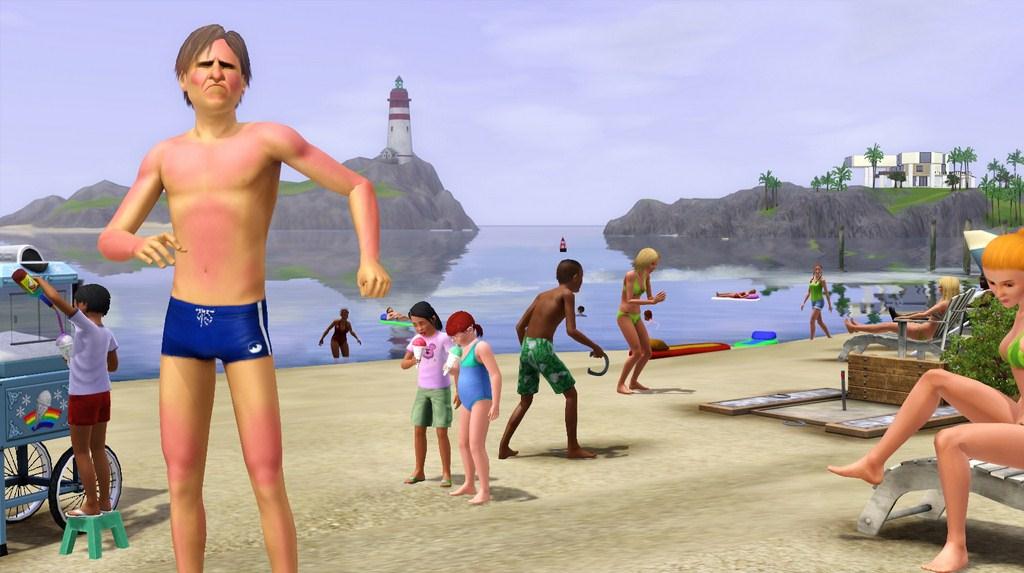 Instead of including a new neighborhood as with the tradition of past expansion packs, Seasons instead allows players to upgrade any of The Sims 3 worlds from expansion packs or the online store in addition to custom maps created by players with the added features. Players have the ability to completely modify the season and weather settings in any of their saved games. The new customization menu allows players to toggle on and off select seasons in addition to their duration of days. Players can even modify what weather types will appear in their game, ultimately allowing them to select their favorite seasons and weather types and toggle off the ones they would like to avoid.

In the Create a Sim feature, players can now select clothing items for the added category of outerwear that functions as a barrier against the various elements when venturing outside the house. The newly added assortment of outerwear coats, stocking hats, and gloves are perfecting for creating a wide variety of fashion styles from traditional winter wardrobes to modern chic. While the outerwear clothing category doesn't have a function in the warmer seasons, it's especially useful to have around when the cold does set in the Sims world.

Objects added with the expansion pack range from a majority of festival-related items such as skating rinks and concession stands to miscellaneous decoration content for the home lot. Seasons marks the return of aliens to the series that randomly appear around the world with their sleek, science fiction-inspired clothing and hovering spacecraft. Sims have a chance of being abducted and returned to their homes impregnated with alien babies. While aliens can't be selected in Create a Sim mode, they do have the ability to form relationships and eventually join a particular household through marriage. It's unfortunate that aliens weren't included in the Create a Sim mode as the special types of Sims from the previous Supernatural expansion including werewolves and such were able to be used in the creation of new households. 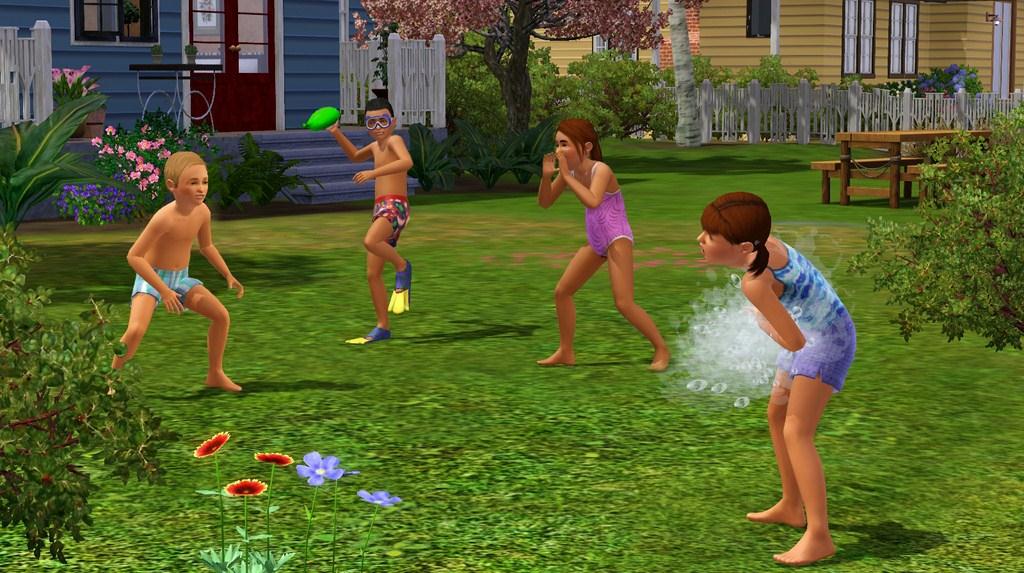 While the addition of seasons and weather do significantly alter the gameplay experience of The Sims 3, the most striking change is the game's visual appearance. From the largest visual improvements such as dynamic snow collection to the minor additions with frosted windows during winter, the expansion pack continually impresses with the attention to detail in each of the seasons and weather types. The Sims 3 base game, without the inclusion of changing seasons and weather, results in a rather drab and stale world. The bold visuals and sound effects of heavy snowfall or thunderstorms instinctively create a notion that staying inside is better than venturing into the world. Details including holiday lights on houses during winter, leaf piles that form in the fall, and sound effects of weather quieted indoors create a far more believable and realistic Sims world.

The addition of seasons, weather types, and other new content in The Sims 3 Seasons result in a more dynamic and engaging gameplay experience. Each of the four seasons include a variety of related festivals and activities that ensure each is distinct and entertaining. The various weather types also function as an important role in gameplay by providing ever-changing temperatures, increased world atmosphere, and a new clothing category of outerwear items to battle any harsh outdoor conditions. In addition, aliens make their return to the series along with a host of new Create a Sim items and objects for the build and buy modes. If all the new content wasn't enough, an impressive visual and audio presentation complete the overall experience. The Sims 3 Seasons is the perfect expansion pack for both longtime fans of the series as well as newcomers looking to expand their base game.