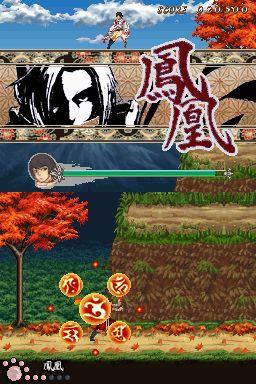 The Legend of Kage 2

The kneejerk reaction to The Legend of Kage 2 would be to compare it to Sega's classic ninja game, Shinobi. But the more you play this Nintendo DS sequel the more you realize that this isn't a fair comparison at all, this game has more in common with Sonic the Hedgehog than it does Shinobi. Sega's ninja series is slow and deliberate, while The Legend of Kage 2 is a fast-paced action game, more akin to a game like Strider or Ninja Spirit.

Of course, I wouldn't be surprised if half of the people reading this review don't have a clue what a Strider or Ninja Spirit is. I might as well be speaking gibberish when I bring up these twenty year old ninja games. But the truth is that it's hard to talk about The Legend of Kage 2 without invoking the name of at least a few old school action games. This isn't one of those sequels where we're using the power of the system to bring the franchise into the 21st century; this is one of those sequels that could have been released in the early 1990s. If I didn't know better I would say that this is was an old Super Famicom game that is just now coming to these shores. But that's not the case, this is a brand new game, it only looks like it's a 16-bit game on the Virtual Console.

If you blinked and missed the first game, all you need to know about this franchise is one thing: You play a ninja that can jump incredibly high. I'm talking about getting to the top of a skyscraper in a single bound, the guy can jump like it's nobody business. In the first can you used this ability to jump to the tops of trees and confuse your enemies from above. The same is true with this sequel, and like the first game it proves to be the one and only memorable trait. Aside from the superhuman jumping ability, this game is just another run of the mill 2D action game.

Not that there's anything wrong with that. If anything this game will remind you why you fell in love with these old school ninja games in the first place. There's not a whole heck of a lot of depth to be found here, just a dozen levels that will test your mettle. That may not be enough for some gamers out there, but if you grew up loving 16-bit side-scrollers and don't mind spending $20, then this game was made specifically for you. The truth is, I am the target audience of this game; so if you suspect that I'm being won over by the game's nostalgic charms, it's because I am.

There's a story here, but really it's completely pointless. Its job is to set you up for each level and introduce a new bad guy. You start out by choosing one of two characters, Kage (a male ninja who throws shurikens) or Chihiro (a female ninja who has a long fundo attack). Each of these characters have their own unique stories, as well as their own weapons. And that's not all; the two characters also have a cool secondary sword attack, which is reminiscent of the memorable attack in Strider. Perhaps it's for this reason that I had so much fun with the game, I can think of worse things to do than play an old timey ninja version of Strider.

The game may be nothing more than a mindless run and slash action game, but that doesn't mean that you don't earn some cool techniques along the way. Sadly none of the new moves you learn are much more than rudimentary attacks you should have had from the get-go. Still, it's nice to have a couple of new moves in your repertoire when you get to the final stages. On top of the new moves you can also create ninja magic by combining colored orbs hidden throughout the game's 12 levels. The different magic does predictable things (throws fireballs, makes you faster, increases your defense, etc.), but at same time they give you something else to do while you're fighting the same ninja for the 3,000th time.Like last year's Contra IV, The Legend of Kage 2 features an extremely tall screen that takes up both of the Nintendo DS's dual screens. For the most part the action is contained to the bottom screen, but it's nice to be able to see what's above you at all times. The game does an excellent job of giving you reasons to check out that top screen, such as allowing you to see who's attacking you and where the safe platforms are. You'll find that a lot of the levels are designed to take advantage of the tall display, so paying attention to both screens is imperative if you want to survive.

Actually, that's not entirely true. For the first half of the game you will barely ever need to pay attention to the top screen, it's a luxury at best. For many of the game's levels it's your job to find your way from the left part of the level to the right, ultimately taking you to a big boss battle. The problem is that these levels can be played like the old Sonic the Hedgehog levels, where you just run through the levels as fast as you can dodging enemies along the way. Thanks to your incredible jumping ability it's hard for the bad guy ninjas to hit you, which takes a lot of the challenge out of the title. Frankly, I was bored by the first six or so levels of The Legend of Kage 2.

Thankfully the game's level designs shift from horizontal to vertical in the second half of the game. As you progress through the game you will discover that a lot of the levels require you to climb vertical platforms, which is more of what you would expect from a dual screened ninja game. The final six levels are extremely interesting, and are the single reason why I would even think about recommending this sequel.

While a lot of old school 16-bit games throw huge bosses in your way, The Legend of Kage 2 takes a far different approach. With only two exceptions, the bosses found in this sequel are no bigger than our heroes. But don't let their small stature fool you, to beat these bosses you're going to have to memorize patterns and have patience. It's during these one on one (and occasionally one on three) battles where the game is at its best, it's fun to watch for patterns and wait for your opening to strike. It still would have been nice to have seen a few more big bosses, but there isn't a boss in the game that I would want to trade. 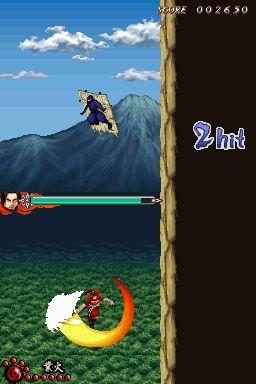 The graphics and sound feel like they came right out of 1993. This isn't one of those sequels like New Super Mario Bros. where everything is using 3D polygons to create a 2D look; instead this is a sprite-based 2D action game. While it's nowhere near as detailed as what we've seen in other 2D action games on the Nintendo DS, there's a certain beauty to the graphics that can only be accomplished using sprites. My only real complaint with the look of the game is in the characters, which for whatever reason feel like they are much too small.

Sadly like so many old school games before it, The Legend of Kage 2 feels a little too short for its own good. While you could play through the game on multiple difficulty settings, most gamers are going to blow through the game in only a few hours. I managed to beat the game on the standard difficulty in around three hours, which seems awfully low ... even for a budget $20 game. Like I said there are some cool extra modes and secret items to collect, but that alone won't keep you going for much more than another few hours.

Don't let the game's length fool you; The Legend of Kage 2 is a fun ride while it lasts. Sure this is nothing more than a throwback to a different time, but it's full of old school goodness and a cheap price tag. The game will also make you want to go back and play the original game, which is nowhere near as fun as this sequel. There's still a lot more that can be done with this series, I just hope that it doesn't take another quarter century before we see The Legend of Kage 3.
It's the sequel you never knew you wanted; it's The Legend of Kage 2! While it's not especially deep and you can beat it in three short hours, there's no denying that this Taito sequel scratches that nostalgia itch you have. Better still, it retails for a mere $20. The Legend of Kage 2 may not be the perfect 16-bit revival, but it's definitely worth checking out for those who love fast-paced ninja platforming action!