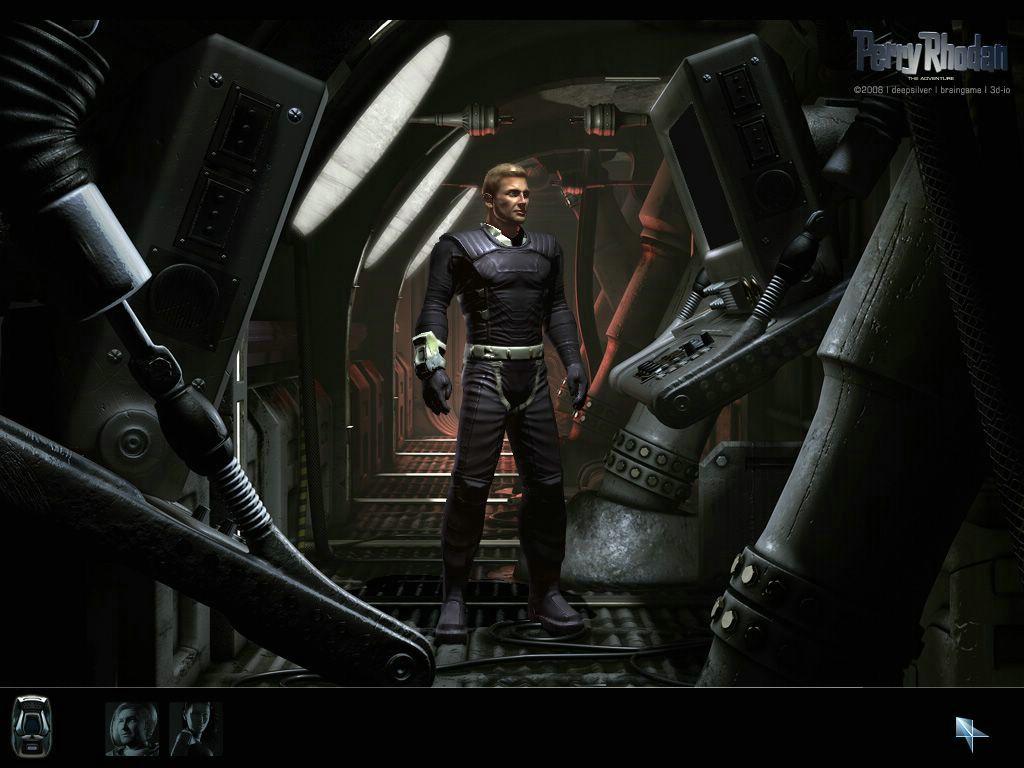 The Immortals of Terra: A Perry Rhodan Adventure

Written by Randy Kalista on 8/19/2008 for PC
More On: The Immortals of Terra: A Perry Rhodan Adventure
There’s a strain of pathos that ribbons itself around Perry Rhodan’s opening monologue. Perry is asking, rhetorically, if anyone knows what it feels like to be an immortal, to live for 3,000 years. Asking if anyone’s lived long enough to watch “the seeds they sow grow, bloom, and wilt over and over again.” He asks because he’s effectively immortal himself, due to some “cell accelerator” mumbo jumbo thought up by smarter minds than my own, rendering him a 3,000-year-old soul trapped in a 39-year-old man’s body. Then, in this same monologue, Perry slips into a gentle diatribe about the greed inherent in terrestrials (and extra-terrestrials), claiming that the universe is certainly big enough for everybody, but there’s always those people that want what you’ve got.

With the opportunity wide open, it’s only mildly disappointing in retrospect that Perry, Regent (or benevolent dictator, if you see fit) of the League of Free Terrans, only rarely reflects on the Atlas-sized weight bearing down on his shoulders. Thankfully, Perry isn’t as shoe-gazing as Lost Odyssey’s Kaim, but Perry’s backstories are also of a pulpier variety, having emerged from early 1960’s Germany in weekly science fiction novellas, and carrying on in multitudinous spinoffs until present day, while arguably influencing other Central Europeean sci-fi authors in the process. The “Perryverse” wasn’t built in a day, and he’s apparently excelled past the stages of shock, denial, and anger.

Perry Rhodan novellas maintain their relevancy by tackling current events – or at least the social climate – of whatever time period his authors have been writing in, as science fiction is wont to do. In the ‘60s it was the Cold War. In the ‘70s it was New Age. In the ‘80s it was the pre-Berlin-Wall-coming-down peace movement. I’m sure the ‘90s were dominated by the rise of the boy bands, but Perry’s adventures don’t make it into English translations often, so I’m left to speculate. 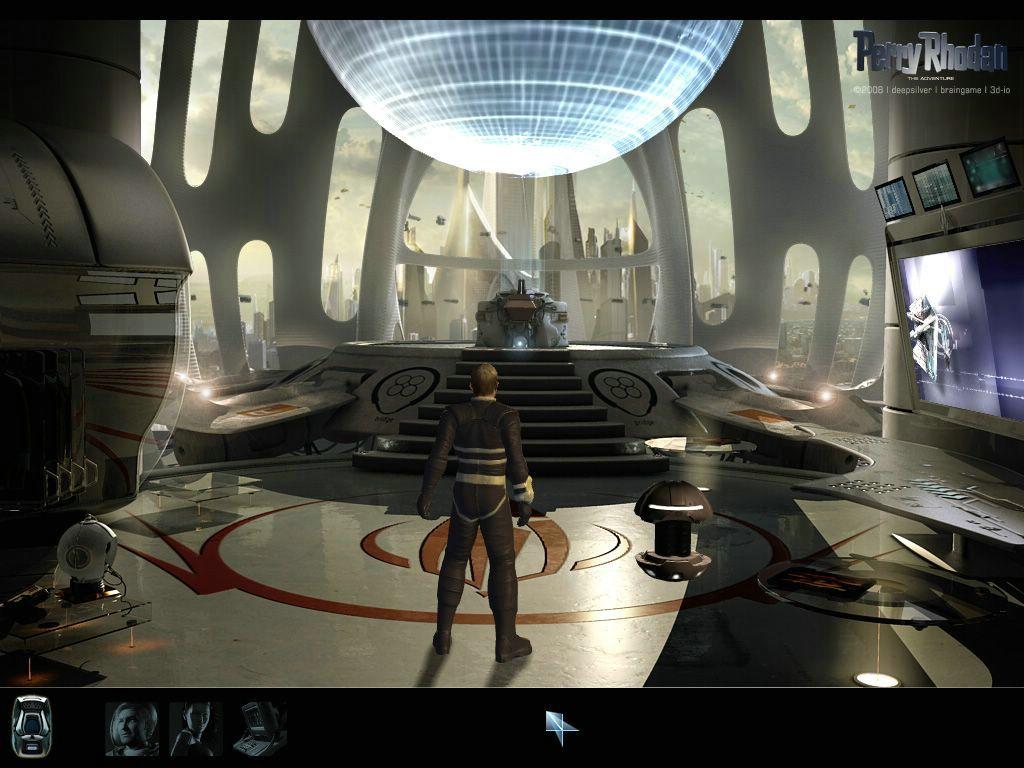 The Immortals of Terra: A Perry Rhodan Adventure (the point-and-click kind of adventure) isn’t afraid to touch upon contemporary sci-fi staples: Creationism vs. Evolution, xenophobia, and somewhat surprisingly – in the Constant Gardener fashion – bottom-line-driven corruption in the pharmaceutical industry. I wasn’t expecting that one either. But this is also a straight-to-videogame story for Perry, original for the medium, though it capitalizes on certain opportunities to create miniature Perry homages reflecting on the 47-year span of the space opera series.

With that healthy, still-running epoch, the visually-disparate chapters belie the give-and-take relationship that the Perryverse engages in with other science fiction models. Across six chapters, Perry explores environments ranging from litter-free Star Trek passageways to Stargate-dusted museum halls, dingy Blade Runner night clubs to a Twelve Monkeys-mined center of the earth strolls. The Immortals of Terra plays out across some of the most stunning sci-fi artwork ever conceived, as Perry tracks his way across what are more fully-realized paintings than they are digitally-rendered set pieces. It’s an undeniably breathtaking excursion.

Punctuating the picturesque, Perry’s dry (not necessarily dull) witticisms canvas nearly every encounter, or non-encounter in a few lonesome, tumbleweed levels. Still, a few lost-in-translation moments also populate some of Perry’s expressions, despite the presence of otherwise deftly-executed American localization from a character largely rooted in Deutschland zeitgeist.

Perry is equal parts everyman, detective, scientist, and politician, sometimes putting gentle force to an object that needs jury rigging, sometimes navigating the rocky waters between social elitism and shadow running, and sometimes pulling chemist-lined brilliance out of his hat when appropriate. Yet there are some things he just doesn’t understand or pursue, even if the game’s inventory database knows how to wax cerebral on some items and notions of the Perryverse that bewilder if your membership to the American Chemical Society has expired. On that same note, it’s exquisite that developer 3d-io didn’t pull any punches, trusting that their audience is intelligent enough to figure out what’s crucial to the Immortals of Terra story, and to perhaps get their jollies hitting Wikipedia for the things they don’t digest right off the bat. It’s still entertaining, however, when you (inevitably) hit that roadblock in an adventure game and you just start running your inventory like a dragnet over every object and person on the screen – and Perry’s advice can make you feel a bit belittled, despite his warm-hug delivery: “Daellian is a hyperphysicist; what’ll he be able to tell me about all known robot types?” I don’t know Perry. I thought I was asking you.As with any point-and-click adventure title, the name of the game is opening doors. And sometimes, especially as you near the conclusion of any given chapter, a bottleneck starts choking the temporal progress, and one missed item is unacceptable under any circumstances. Every piece of every puzzle must be fitted before moving on, and that every piece of every future puzzle must be obtained before progressing. It’s beyond the scope of this review to challenge the mechanics of an entire videogame genre, but the Immortals of Terra works harder than many of its peers at presenting logical puzzles without skimping on every challenge those puzzles present. Not to mention a bugger of an “end boss” puzzle that stumped me for hours.

Across the Milky Way, there are puzzles of all shapes and sizes: Time-locked puzzles, audio puzzles, cryptography puzzles, dialogue puzzles, sliding tile puzzles, and inventory puzzles, all of which aim to connect the dots as to why Perry Rhodan’s best friend Mondra Diamond has been kidnapped, and why it’s likely centered around her scholastic papers on the mythological race of Illochim (compare to the Christian Bible’s “Elohim”). It will – and it’s time to face this – take some acclimating in order to appreciate the back-and-forth ping-pong motion in each chapter. Even though the motions are splayed across stellar backdrops, it’s hard not to complain, even if it’s even harder to complain for long. 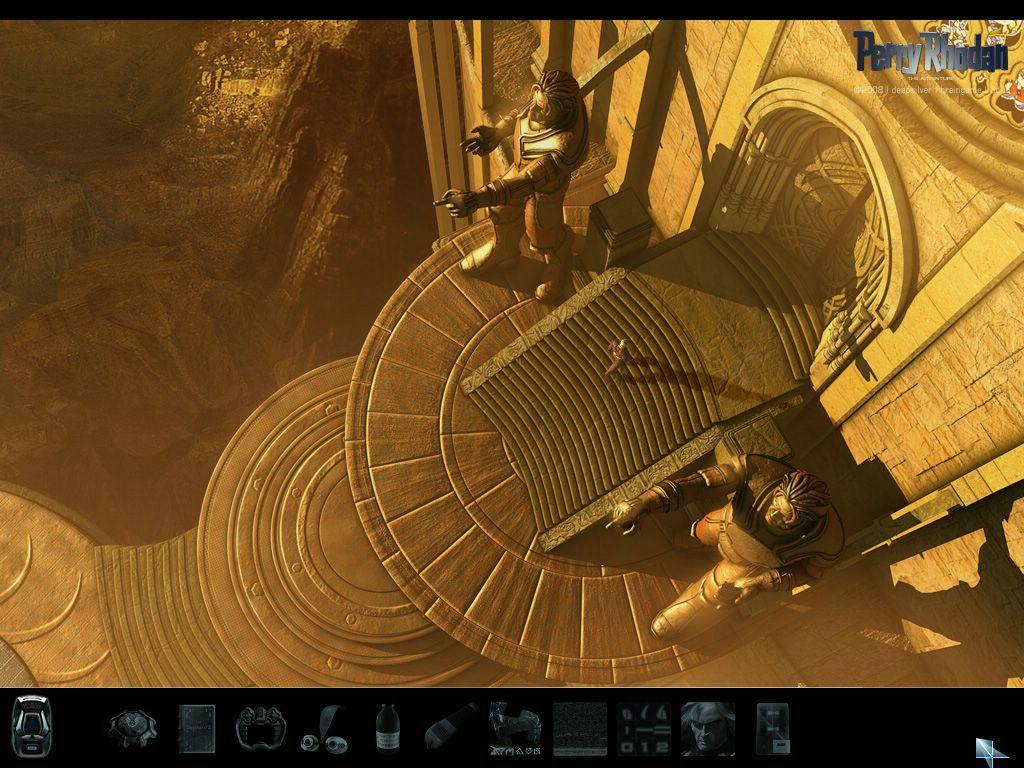 Despite a Mensa-strength endgame (I may be exaggerating, but I’m the type of person that’s never put a Rubik’s Cube back together but was never bothered by that shortcoming either), the fact that I was utterly mind-boggled but determined to press on is a testament to the game’s strengths puzzle-wise. Too many other adventure titles – for instance, Runaway: Dream of the Turtle or, to a lesser extent, Jack Keane – heavily-rely on walkthrough solutions and makes-no-sense puzzles, that it turns the Immortals of Terra into a full-blown breath of fresh air in a genre often looking for reacceptance in all the wrong places.

Despite the fleeting and episodic feel of this adventure, character development springs up without hesitation, though it’s often important to recall that some of Perry’s interactions with cohorts, rivals, and arch-nemesis are informed by, yes, a series of stories that are nearly half a century old. When Perry starts browbeating a colleague named Daellian for his “self-pitying” – a brilliantly-pulpy character that’s a human brain preserved in a hovering conveyance – it’s important to note that this has been a running issue between the two gentlemen for years, and that Perry isn’t instantly haughty and impatient with people that have been reduced to nothing but a brain in a jar. Further, in the game’s depiction of “The Blues,” an alien race with disc-shaped heads and a grating falsetto, they’ve managed to introduce a set of characters as annoying as Jar Jar Binks – sad but true. The roster also features (in progressively less annoying formats) a touchy-feely race of elephant-trunked people; sexy, unspeaking blue-skinned femaliens; white-haired, serpent-voiced humanoid militants; and plenty of Terran DNA strands that trace their ancestry back to Earth. The variety of characters is on par with Mass Effect, though the Immortals of Terra doesn’t outline racial profiles as solidly as BioWare’s near-unmatchable space epic.
A soupy ending cinematic can’t drag down this intimately-crafted homage to German sci-fi staple (but American unknown), Perry Rhodan. The puzzles pack an analytical punch, the graphics are painterly and inspired, and the story rarely loses traction during its manageable spiral of momentum.