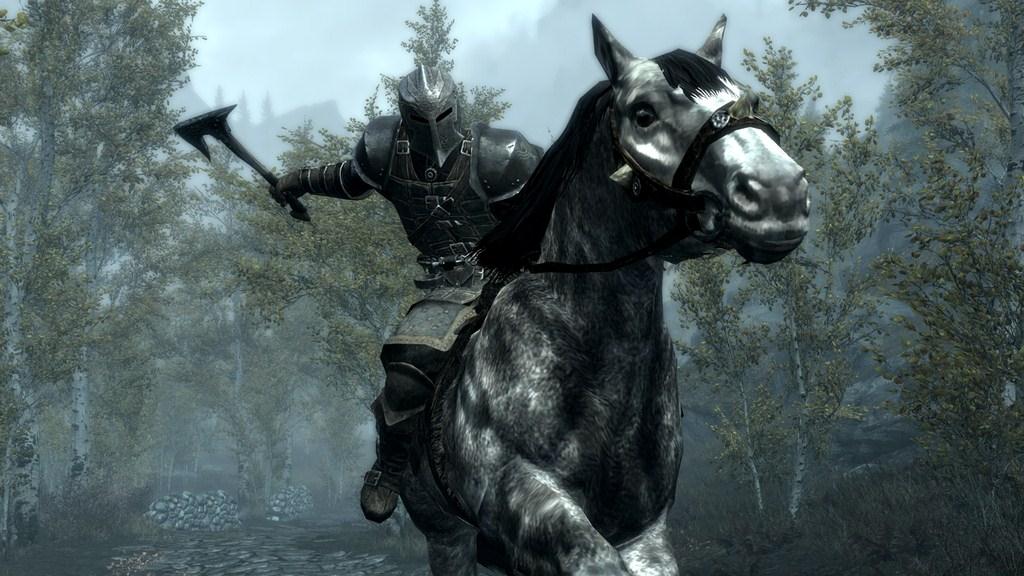 Written by John Yan on 8/13/2012 for PC
More On: The Elder Scrolls V: Skyrim Dawnguard
After a little over a month released for the Xbox 360, Skyrim's first DLC Dawnguard finally comes to th PC. I've been looking forward to continuing my adventures in Skyrim so I was pretty happy when Bethesda sent along a Steam code to check the game out.

Now, Mike did a good job on his take of the DLC for the 360 so I won't go into as much detail as he did. But for the story, Dawnguard lets you take the side of either the vampires or the vampire hunters named after the title. The vampires want to extinguish the sun, while the Dawnguard mean to put an end to the undead race. It's up to you as to how you want to proceed and who's side you will align yourself with.

I entered the DLC as a level 41 Imperial with full Daedric armor and some pretty powerful dual wielding weapons. The suggested level to play was 10 so I was pretty far ahead of the game. Needless to say, I had a pretty easy time in combat and only died once because of my carelessness in dealing with two dragons. Other than that, the quests and monsters didn't offer up too much of a challenge, but that's probably to be expected for those with veteran Skyrim characters. 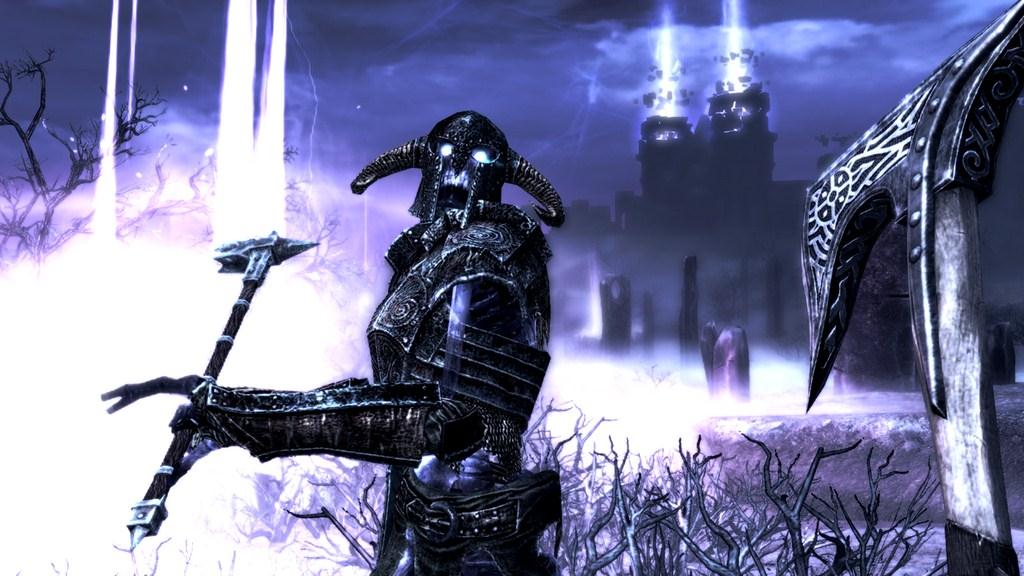 For the game, I decided to join the Dawnguard and stop the vampire menace. For the most part, the quests from either side will be the same with some change in dialogue, of course. Once you choose a side early on in the DLC,  that's it so be sure to save right before talking to Harkon, the vampire lord and father of the Serana, the female vampire follower that will accompany you through most of the DLC. Even though I was on the side of the vampire hunters, I was able to transform into a vampire lord for the sake of the story so don't  be worried about not being able to try out the vampirism presented in the DLC should you choose to side with the Dawnguard.

There are about twelve main quests that will take you somewhere in the 6-10 hour range to complete. I rushed through the main quest pretty quickly so it took me the former in terms of amount of time played. The main story line is fun and I enjoyed the interactions that Serana and I had as well as uncovering the various locations as we went in search for Auriel's Bow, the weapon that can be used for good or evil. There's nothing really new to the quest layout, but it was great to see some of the work that went into creating the diverse locations that Bethesda has produced. I especially liked the two castles of the opposite sides and there were a few times I got that awed feeling when seeing a structure or area for the first time.

The Soul Cairn, a new area you visit were souls are imprisoned, looked impressive but disappointed with the amount of things to do there. It's a very large area to explore,  but seemed kind of barren with a few folks to talk to, some monsters to deal with, and a small amount of side quests presented. I definitely would've liked more to do here and perhaps more areas of content. 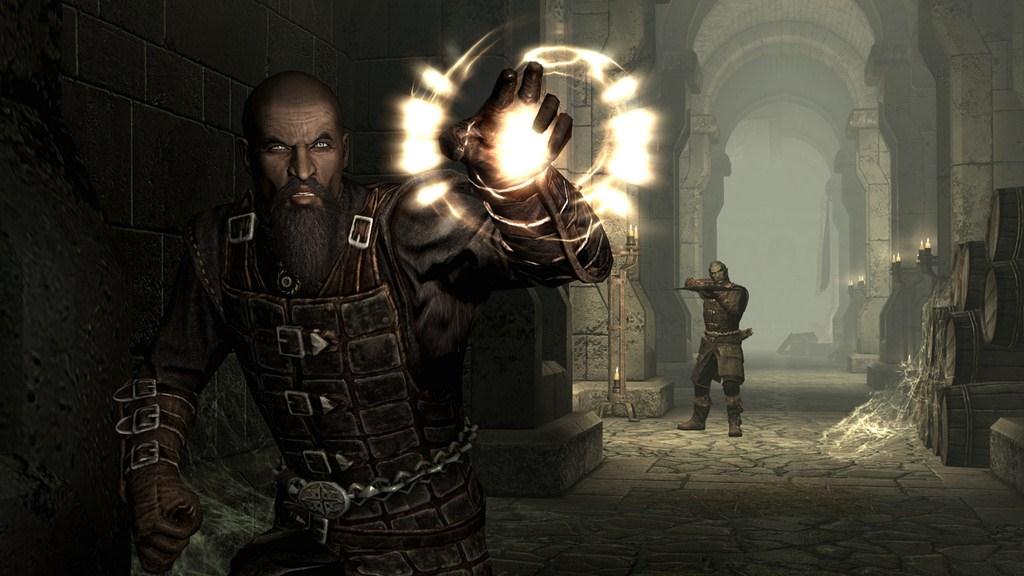 You’ll get to fight some new monsters, but not that many. Gargoyles are probably the most prominent new foes along with some new undead types in the Soul Cairn. Legendary dragons have been added so hopefully they provide a tougher test for higher level players. I haven’t run into one yet, but I’m anxious to see how much more powerful these guys really are. Sadly, it seemed I fought mostly Falmer and vampires, which if you played a lot of Skyrim, are probably sick of the Falmer by now.

I was able to play as a maxed out vampire lord in Bethesda's booth at E3 and I thought it was alright. I know that's a big feature for this DLC and while it was a little interesting to have the ability to turn into the lord along with the usage of its powers, I didn't feel as though it was that much more fun. You're stuck in third person mode, which isn't that bad but hovering around, summoning gargoyles (one of the add-on's new additions), and having the public attack me just wasn't as appealing as I thought it would be. Nevertheless, you do get a brand new vampire specific skill tree to improve yourself with and it does play differently than your standard Skyrim character so that might be fun for some folks.

Bethesda decided to keep the level cap at 60 with this DLC, which is a little disappointing. I would've liked a few more levels just to add some more skill points to my tree. Also, nothing new has been added to the standard skill tree, but lynthacopy and vampirism skill trees are in place so you can further add to your character's skills should you be one of the two. 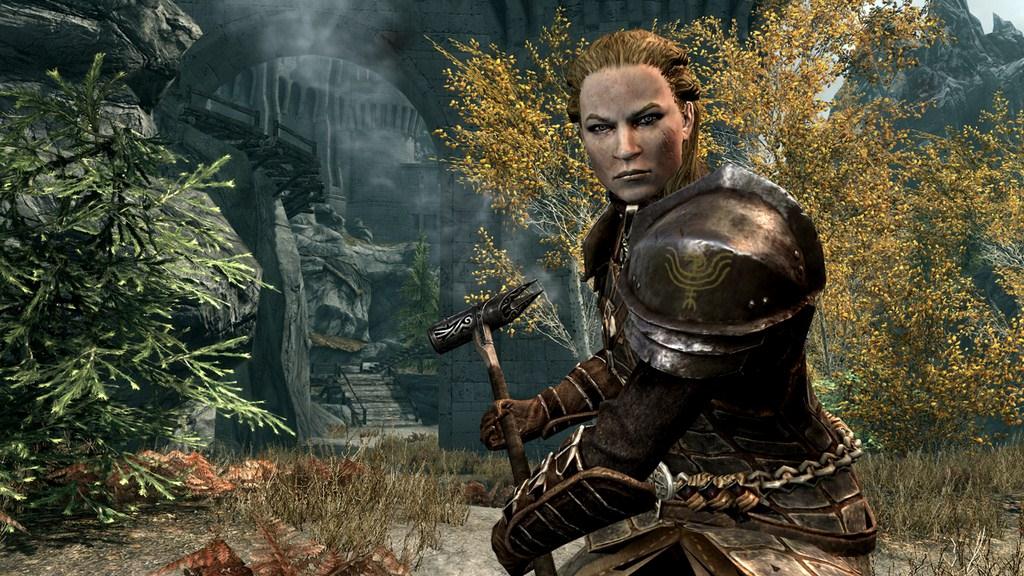 There wasn't any loot that I ran into that was worth keeping either, although Auriel's Bow is kind of fun. You can make two different types of arrows from Elven arrows. When you shoot the arrow at the sun, it will cause either a raining of sun rays damaging those that get hit or causing a short blackout of the sun, which benefits those with vampirism, for a short amount of time, depending on the type of arrow you use. One weapon introduced early that is new is the crossbow. They are a little more powerful than the standard bow and require bolts that you’ll find or craft in the game.

Dragonbone weapons have been added and from the smithing menu, some are more powerful than the Daedric weapons. This should make the dragon bones a little more useful and add some nice little weapons to craft if you would like to.

A character in Riften named Galathil has been added that can change your appearance. For 1000 gold pieces, you can adjust your physical features if you should get tired of what you looked like. 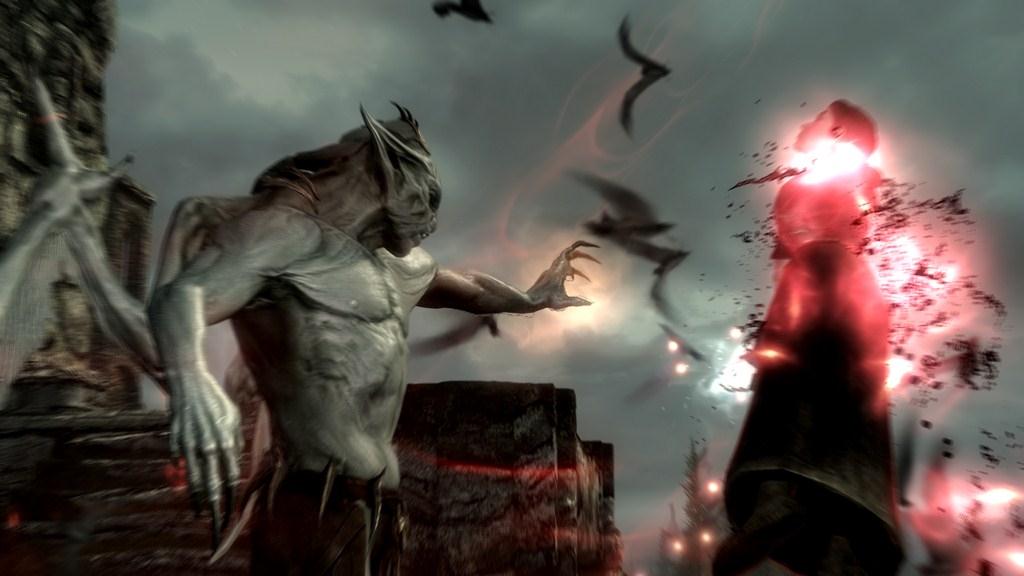 Having played plenty of Fallout and Fallout New Vegas DLCs, I was happy that I wasn't forced to leave my follower behind for a good portion of the DLC.  Also after all was said and done, I was able to not only retain Serana as a permanent follower, but add an armored troll to my group. Summoning the Spectral Assassin, I was able to wander around Skyrim with four followers without one being dismissed until they died. I was pretty happy to have such a large group follow me around and help me out, but it can get a little annoying in tight spaces. Still, I'm glad to see that I was able to expand my group of friends this way.

Bug wise, I guess I was lucky in that I ran into two when playing the game. In my quest to cure my vampirism by meeting a person at dawn, he never showed up and I had to reload and request the cure again the second time.  The other bug was the inability to move all the way to the bottom right and select the Dawnguard castle to fast travel to at times. I had to fast travel to some place close and then the map let me scroll to where the castle was. It's a minor inconvenience but an inconvenience nevertheless. Other than that, I was pretty bug free in my session, but I've read of a few that people have encountered so your mileage may vary.

Bethesda's attempt at making a larger DLC is good, but not one of their best pieces of work. They are asking for more though and it's tough to say if it's worth $20 as it didn't take me that much longer to finish this than some of the $5 Fallout DLCs. There's some good content in there though and having Sarene as a follower is pretty cool, but there's a lack of good gear and no increase in level cap. Playing as a vampire lord is OK, but at least there are some new skill trees for the vampire and the werewolf.  Dawnguard is not a bad outing for the first DLC for Skyrim,  but my expectations for the next one will be a lot higher and I think Bethesda needs to aim higher since they are looking to make more expansive and more expensive DLC for Skyrim. Fans of the game should enjoy it though as I had a good time for a good portion of it.
Dawnguard is a good first DLC for Skyrim, but it's hard to say if it's worth the $20. There's some large places to explore, but some lack content and there's no really good loot it seems. The story's fun though and I do like the new follower in Serana. Fans of the game will enjoy the extra quests. Turning into a vampire is OK, but I didn't feel I missed much by not utilizing the power but for a few times.