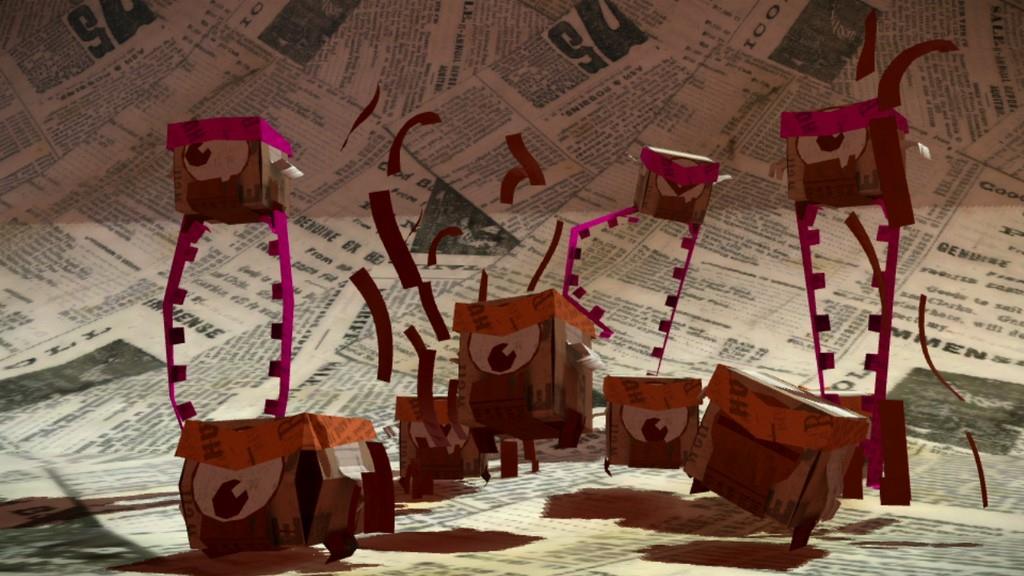 Even though their resume isn’t the longest in the industry, Media Molecule (MM) has quickly become one of my personal, favorite developers. The studio has made quite a name for itself with the LittleBigPlanet franchise thanks to the franchise’s unique experience and engulfing world(s). There is just something about the series’ ability to tap into the player’s imagination that goes above and beyond most of the other games on the market. I thought that this was just a special trait specific to that title, but I was wrong. It turns out that creating those types of experiences just happens to be Mm’s specialty because they have done it again with Tearaway for the Vita.

At first glance, Tearaway looks simple enough, as it is a game set inside a papercraft world. The visuals aren’t particularly flashy but the entire world is unique and interesting. It truly looks as if this world was crafted from scraps of construction paper; from jagged, torn edges to the curl of corners, MM fully embraces the idea that everything in this world is made from paper. It doesn’t take long before you, as a player, buy into the concept either as you begin thinking about things in the same mindset that it was made. Paper can be folded, cut, rolled, manipulated in unique ways and that is how you have to look at the world in front of you.

You are a, well, a “You”. Basically, you’re an ominous being who lives in the sun that the creatures inside the game look to for guidance. When I say that you are this godly being, I truly mean it as the Vita’s camera uses your image in the game as it you are truly looking down into this magical world inside of your Vita. This little world is one that is made up of folk tales and stories told across the ages to capture the imagination of Sogport, the ingame world. The tales have become predictable however and the inhabitants of Sogport desire something new; they want an original story to pass on, something that they have never heard. In order to do so, they send a messenger, known as Atoi, to deliver a message of this desire to the mighty You in the sky. It sounds weird, and it really is, but it completely works in the context of this adventure and creates one of the most memorable adventures I have had in a game in a long, long time.

It would be easy to argue that the game has some religious undertones to it, with the reference to an almighty being who can interact and impact the world as they see fit. That is what the crux of Tearaway’s gameplay is based on, your (or should I say Your) ability to reach into and manipulate the world around Atoi. This is done in many ways, from shaking the Vita, to pressing your fingers onto the rear touch panel, and having digital versions of them rise up out of the ground in the game world. You can use these interaction to distract or attack enemies in Atoi’s defense or manipulate the world to his advantage.

If you come across a rushing waterfall that the little carrier just can’t seem to get past, stick your fingers into the world and block the water so that he can dart across. Is there a giant object that seems to be blocking the path, why not use a little divine intervention and manipulate it to Atoi’s benefit. That is the mindset that you have to take with the game: you are the divine intervention. The game really eases you into these concepts, with the largest focus lying on the use of the rear touch panel, although other features like the microphone, tilt features, and the front, touchscreen are also used regularly. They are slowly added to your arsenal of abilities, as well as some special maneuvers for Atoi.

As magical as it feels to have a direct impact in the world, it is your ability to shape and mold it for the duration of your experience that brings the game’s true charm. In addition to physically interacting with the world, you will also be doing a bit of creation as well. You will need to draw assets for the game world such as snowflakes, flames, and even decorative jewelry that will be used throughout the game. This is truly where the game shines as it becomes a bit of your own creation. It is sort of like Mm did most of the complicated, programming legwork, and your imagination is what puts on the final coat of paint. You can design and cut out your own creations at any time and place them in the world on characters and objects. The level of personalization is ridiculous and brings a ton of charm to the experience.

While most of the gameplay focuses on platforming and finding your way through the world, there is a small amount of combat with bad guys known as scraps. The combat mechanics are minimalistic at best. It really never evolves beyond stomping on an enemy’s head or throwing something at them and to be honest, it doesn’t really have to in order to succeed. The focus here isn’t the fighting, but the interaction with the world, and you will do a ton of that even in the shortest of battles. These are all quick and relatively harmless to be honest, providing little to know challenge during your adventure. The challenge comes with exploring and surviving the physical world, which is appreciated considering how much heart has been poured into crafting that world.

Just as you spend time putting your own touch into the game world, Tearaway gives players a chance to let its world spill over into yours as well. Atoi is equipped with a camera (complete with a “selfie” option) that can be used to take pictures of your adventure using a variety of lenses and filters which can be shared with the world through the Tearaway.me website. The site also gives you access to printable papercraft designs that you can collect within the game featuring some of the games most recognizable characters. It is a nice, added touch that blurs the real- and game worlds even further than the gameplay itself does. 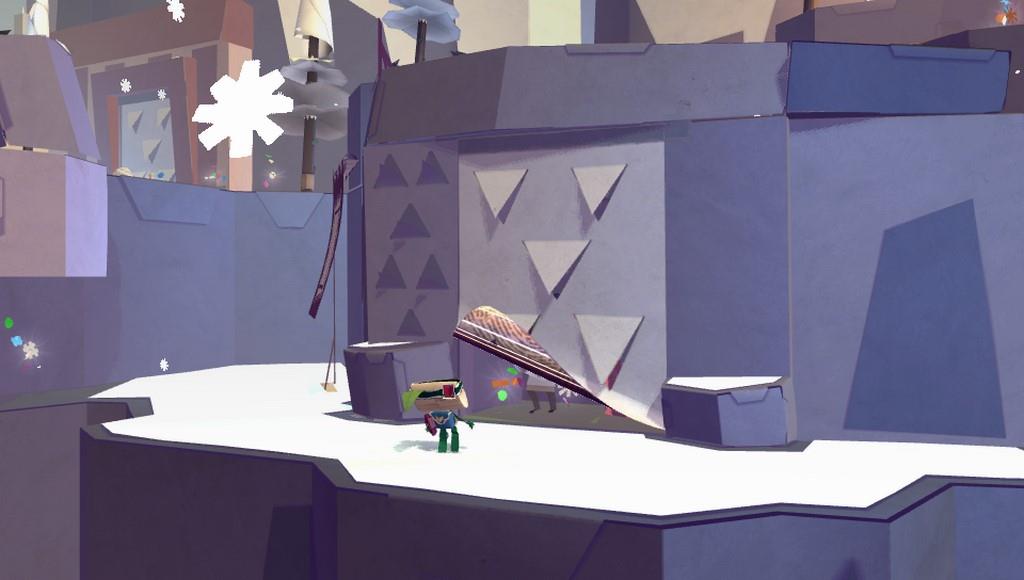 There are really two main problems that I found with the experience. The first is a very finicky checkpoint system. The game has a habit of pushing you forward a checkpoint, which while working in your benefit, just seems odd. I ran into this a lot on some of the more more troublesome platform sections of the game; I would basically get one shot at it and upon failure, find myself respawning at the next checkpoint. Sometime I just wanted another shot at the task, not a free pass to the next section. I am not sure sure if this was intentional or not in terms of the game’s design, but it really came across as “extreme hand-holding”.

The second issue is the pacing of the game. It isn’t bad, by any means, but by the time the platforming and puzzle aspects truly hit their stride, the game is over. The last couple of missions, particularly the last three or four levels (beginning with The Tear), are when the true joy of the game finally comes out. All of the pieces that you have been gathering over the course of the game begin coming together and you have to put all of your abilities and tools to work to make your way through the levels. This is when the game truly shines. Try guiding Atoi across a path while tilting your Vita to slide the platforms and keeping your fingers in place on the rear touch panel to stop some objects from shifting for your benefit; it’s tricky and a ton of fun.

Tearaway isn’t a difficult game, but it is a very enjoyable one. You won’t break a sweat solving any of the game’s puzzles or fighting your way through on of the various battles; they are simple by design and while that may turn off some gamers, it opens up the game to a much wider audience. The game is meant to be inviting and captivating, not difficult to the point that it turns someone away with its challenge. You will however find yourself getting lost exploring the beautiful landscapes and interacting with the colorful characters, whether you are redesigning the look of an animal or a flag or seeking out new and interesting pictures for your online scrapbook. This is what video games were meant to do: suck you in and let you explore your imagination. Tearaway does just that and it does so in a manner few other games have even come close to achieving. Media Molecule has knocked another one out of the park and both you and your imagination will thank them for it when you head to Sogport.

Tearaway is an excellent 3D platformer that takes full advantage of everything that Sony’s Vita has to offer. It is amazing what results when a developer, such as Media Molecule, truly “gets” the system that they are working with. This is easily going to be one of the marquee titles for the Vita this holiday season and possibly for the system’s entire lifespan.