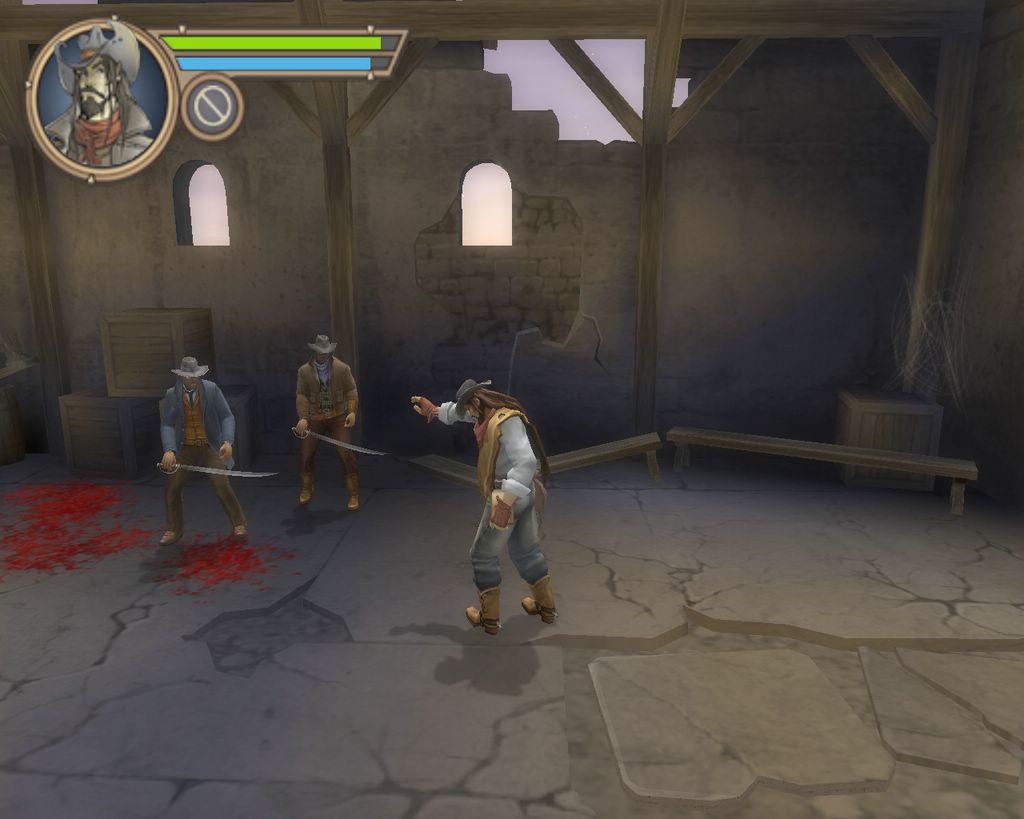 Written by Dave Gamble on 12/12/2007 for PC
More On: Swashbuckler
I had moderately high hopes for Atari's Swashbucklers Blue vs. Grey. I mean after all, the description on the box says “Get ready to take on the role of Abraham Gray, the schizophrenic and morally lacking Captain in his smuggling adventures throughout the treacherous waters of the Caribbean!” Morally lacking and schizophrenic? In the Caribbean? That sounds like my dream vacation! Further perusal of the promised delights of the game sounded even more intriguing: elements of trading and resource management, role playing, and mano y mano combat. Why, it was practically a gamers buffet! The premise lent a tingle of excitement as well: piracy on the high seas between the Caribbean and the US eastern seaboard. Tall sailing ships such as schooners mixing it up with ironclad steamboats, with political intrigue and shifting war-time loyalties thrown in. What could go wrong?

Sadly, plenty. I knew I was in for a disappointment pretty early into the game when I encountered the tutorial system. There are two basic types of tutorials in my experience: the full-immersion sink-or-swim method of the Call of Duty series, or the pedantic step-by-laborious-step method. B&G (sorry, but there is just no way I'm going to type 'Swashbucklers' again) tries to have it both ways, and this is apparently where the promised schizophrenia of Capt. Gray comes in. As you work your way through the beginning phases of the story, you are repeatedly interrupted by the Captain's “Inner Voice,” which takes the form of pop-up screens that argue back and forth. One screen will describe what the Captain needs to know or do, and the replying screen does, well, absolutely nothing to add value. They bicker back and forth like Itchy & Scratchy, except in an even less entertaining way. Consider this scintillating text: “My inner voice is talking to me... um. This is probably delirium... but I haven't even had a drink yet.” Really, it was enough to simultaneously give drinking a bad name and drive me to the liquor cabinet to mix up a super-sized Martini. This went on and on for awhile, but eventually tapered off until it became a rare but unpleasant experience, kind of like a colonoscopy.

Another jarring moment came soon thereafter, when the first character interaction occurred. See, the characters don't actually talk. The voice acting is not just bad, it's non-existent. Rather than speak, the characters grunt back and forth at each other in a manner reminiscent of a visit to a stroke clinic. Subtitles are provided for the 100% of people in the world that don't understand pseudo-mammalian mumbling. Of course, given the weakness of the dialog, this may have actually been a blessing.

Given that the tutorial eventually finished, and that I have enjoyed non-spoken games before (Viva Pinata comes to mind), I pressed on optimistically, looking forward to outfitting my ship and setting out to sea for glorious adventures. To get an idea of what I was expecting, consider again Viva Pinata. I was anticipating a fairly complex economic model in which I would have to keep detailed records regarding where trade items were plentiful and cheap, and where they were rare and would sell for great profit. I thought I would have to balance my expenditures on cargo with my costs for acquiring consumables for the crew, maintenance costs for the boat, and the plethora of other details that would go into owning and operating a cargo ship. I thought I would be required to ensure that sufficient comestibles were on hand for extended voyages to avoid crew starvation or mutiny. Being a beneficent sort of Captain, I had planned on providing plenty of salt pork and rum for my hard-working sailors. What I found, though, was an extremely pale version of that. Almost transparent it 'twer, Matey. The buying and selling ended up being very rudimentary, and contained none of the challenges and vagaries of even basic economic principles like supply, demand, currency exchange rates, etc. Within no time, I was able to amass a large fortune by moving stuff repetitively between point A and point B. I spent nothing at all on outfitting the ship. I bought no supplies for the voyages. Pure profit, it was, and mindless as could be.

“But,” you're saying, “what about that large fortune?” I thought I'd use that to buy a bigger ship, but it seems that none were available. I could buy one like I already had, or I could buy a smaller one. “No problem,” I thought, “because I'm a pirate, ain't I? I'll just take one!” Truth be told, the pirating aspects hadn't appealed to me as much as the commodity trading, which is sadly indicative of the current state of my testosterone level. But, you gotta do what you gotta do, and there was still some hope that the pirating would provide the entertainment value that was missing in the sailing and trading. Well, not so much. I didn't mention it before when I was talking about the trading, but the operation of the ship is simplistic to an extreme. No consideration of weather or winds is required; you just drive the ship around with the same WASD controls you use to walk. That was ok when I was more interested in buying and selling cargo. Worrying about tides and winds and all of that would have just gotten in the way. But when it comes to ship-to-ship battle at sea, the winds are the be all and end all of battle tactics. Alas, Mateys, they were no more of a factor in the sea fights that they were in the passages from the islands to the mainland. The battles quickly degenerated into circling around the enemy ship and mashing down the mouse button to fire the cannons. You take damage, they take damage. Once the game has determined that the enemy crew is sufficiently weakened, you drive on up to the other ship and board it. There's no fancy swinging across on ropes, though. You hit the space bar, and there you are. This, of course, assumes you are dealing with a ship with capabilities similar to your own. When I tried to go up against a larger and more desireable ship, I got my sea-going buttocks handed to me on a platter; who knew they had Exocet missles during the Civil War? Odd, that.

Ok, ship-to-ship fighting tactics and strategy clearly weren't going to be where this game shined. Through process of elimination, it appeared that all of the other stuff was simply support for the awesome hand-to-hand fighting that I would surely enjoy after boarding the ship. You see this coming, don't you? The fighting was the same going-through-the-motions repetitive button-mashing as the rest of the game. I eventually did it enough to gain enough experience points to earn a fighting move that resulted in multiple enemies being decapitated in single swing of my sword, but by that time it was simply too little, too late. And honestly, why would you put a blood-gushing, heads-rolling bloodbath that virtually guarantees a Mature 17+ rating into a game that is barely entertaining enough for a 10 year old? The mind bogglingly stupid marketing economics of a decision like that left me gasping for breath far more than any intended excitement to be derived from the game itself. I still have been unable to think of a demographic group that would be well targeted by this game as implemented.

I liked the idea of Swashbucklers, but the failure to do any one thing well and the recurring success at doing many things poorly didn't deliver what I had hoped for. A more sophisticated commerce and ship operations model combined with a fighting model with more variety would have provided an open-ended game similar to the Grand Theft Auto series, and that would have been really fun. Unfortunately, Swashbucklers is instead a shallow and ultimately boring, repetitive game that I can't recommend to anyone.
Swashbucklers tries to do many things, but ultimately disappoints in all of them. The idea was sound, but the implentation is lacking