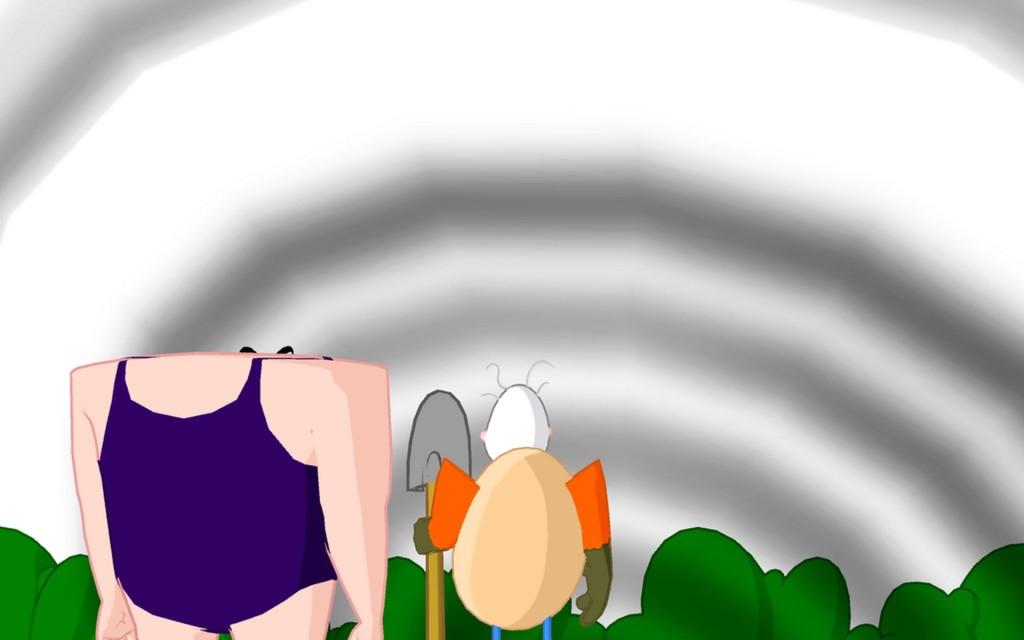 Written by Randy Kalista on 12/17/2008 for PC
More On: Strong Bad's Cool Game for Attractive People - Episode 5: 8-Bit Is Enough
Without quite enough fanfare for as awesome an occurrence as it is (as far as Homestar Runner fans are concerned), Strong Bad’s Trogdor arcade cabinet takes on a life of its own. Two L-shaped legs pop out of the bottom of the cabinet; two green wings sprout from the top; and Trogdor’s signature flexing arm -- just the one -- busts out of the side. Accompanied by his bleeping theme song, Trogdor runs out of Strong Bad’s basement and, as any self-respecting dragon is wont to do, begins to “burninate” the countryside.

8-Bit Is Enough, the season one finale of Strong Bad’s Cool Game for Attractive People, breaks plenty a fourth wall in video game design. And while we’re well-past the 8-bit graphical era, many of the design choices populating today’s up-to-the-minute releases carry on an instantly recognizable legacy from the medium’s 1980’s roots. Dozens of overused tropes from old school video games cross the line between the game world and Strong Bad’s real world, all while Trogdor sweeps across the backdrops, setting everything aflame.

“He’s out of control! You’ve got to stop him!” says Strong Sad. But eventually Strong Bad realizes that the destruction of the “8-bit reality containment field” inside of the Trogdor arcade cabinet is making real life a little too surreal. Despite admiring his own artistically-conceived creation to no end, 8-Bit Is Enough places Strong Bad in a position to have to kill his own baby.

With the single-minded drive of an ‘80s game character, Strong Bad sets aside a large portion of his talent for troublemaking and Homestar Runner bashing in order to set things aright. Immediately it becomes apparent that 8-Bit Is Enough, more than any other episode up to this point, would be difficult to enjoy without the previous four episodes informing the current state of affairs. Most of the cast regulars gently bow to the side as Strong Bad full-on charges through the storyline alone, while still managing to add a score of 8-bit Fun Machine video game characters to his party. (Yes, Strong Bad is in a video game, per se, but he also plays video games within his own video game. Hamlet’s play within the play, if you will.) In a commendable adventure game twist, Strong Bad’s inventory is made up of less trinket-like inventory puzzle pieces, and more character-based puzzles. For example, he’ll use Boxer Joe from the “Snake Boxer” game in order to bust open crates, or take advantage of metal band Limozeen’s penchant for picking up on women in order to … well, that’s enough spoilers.Among the instantly recognizable memes that have posited themselves into hundreds upon hundreds of video games over the years: Continue screens, hit point meters, checkpoints, obligatory lava and ice levels, unbeatable difficulty levels, product placement, as well as weapon and health pack respawns. Where the uninitiated would see a stack of unidentified wooden crates, Strong Bad -- thinking like a gamer -- sees “a mountain of power-ups, ammo, extra lives, shields, and coins.” The reason these are all comfort food for a video gamer is because we’ve seen these objects implemented since Pitfall, Donkey Kong, and Mario Brothers (all of which are paid tribute in 8-bit Is Enough). Amidst this increasingly Frankenstein-mashed appearance of the real world, Strong Bad also travels into developer Videlectrix’s Lawnmower Man-like mainframe. From that central hub, he has run-ins with another series favorite, Stinkoman, Strong Bad’s Japanese-animated version of himself, complete with some phrases whimsically lost in translation.

Also sometimes misplaced in this final episode is the hint system. Depending on your place in the storyline, it will either bombard you or abandon you with baffling aplomb. And while the game’s intention never was to stump players with headscratchers, the season finale still couldn’t fully uncork the occasional bottleneck. Also, the in-game implementation of a “light musket” (as opposed to a “light gun” like those used in games like Duck Hunt or House of the Dead) would frequently foul up subsequent actions in the inventory bar. But the season finale is still a wonderful wrap to an eclectic first season. Memorable moments in 8-Bit Is Enough include seeing Strong Sad fulfill his ultimate desire to serve as a bottomless quest-giver; Strong Bad exploring the uneventful lives of Extra Lives waiting to play the game; and one difficult but stunningly smart puzzle that involves the relocation of a standard checkpoint to a more advantageous position.
8-Bit Is Enough is a surprisingly slow-to-start but satisfying capstone to an eclectic first season for Homestar Runner and friends.