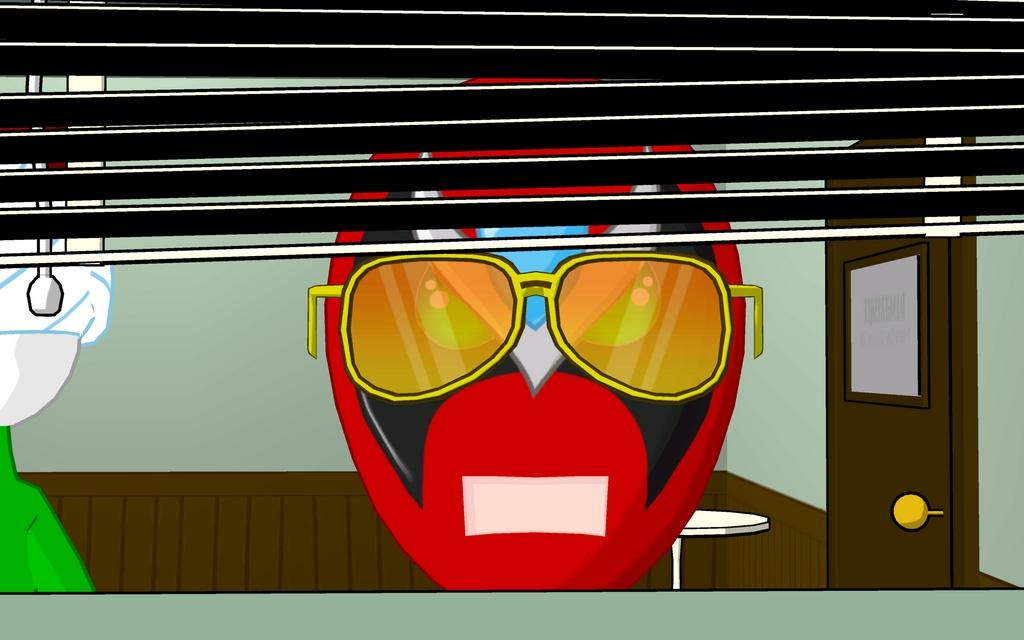 Episode 4 starts with a zoomed-in ashtray balancing a smoking cigarette, a probably-unloaded but still dangerous-looking “nunchuk gun,” and a busted set of window blinds, all set within a noir-lit office. But don’t let the pulpy, period-specific setting fool you: Before Episode 4 lets up, clichés will be (purposely) borrowed from everything ranging between buddy cop movies like Lethal Weapon and Bad Boys, to cop comedies like The Police Academy series, to international spy thrillers from the ‘70s and ‘80s (the episode just barely refrains from a “The name’s Bond … Strong Bond” script). Additionally, Episode 4 makes knowing references to publisher Telltale Games’ detective agency adventure superstars, Sam & Max.

With Homestar Runner (playing the buddy cop as “Dangeresque Too”), Coach Z (donning a fez as the two-weeks-from-retirement “Renaldo”), and Strong Bad (as the cop shades-wearing “Dangeresque 3”), it looks like the trio are ready to have one last go-round together.

Marzipan (playing as “Cutesy Buttons”) entrusts a rare, rainforest plant growth formula into Strong Bad’s hands. And from there, an Indiana Jones-styled whirlwind tour of the world ensues, taking the characters to spy thriller mainstays like Paris, Venice, Tokyo, and far, far beyond. Many other characters take on amusing and stereotyped roles: The King of Town is the Italian mobster-esque “Perducci” (sometimes pronounced “Per-Doochie,” “Per-Dookie,” or “Per-Chootie”); Strong Mad plays the strong-armed heavy, “KillingYouGuy”); Bubs is the perpetually-imprisoned “Baron Diamonocle”; Pom Pom is the mad scientist “Professor Experimento”; and The Cheat ends up with the alias “Craig.” Unless that’s a tribute to the new James Bond, Daniel Craig, then I don’t know either.

The fact that it all takes place within Free Country USA (where all of the Homestar webcomics take place) with cardboard cutouts fashioned from refrigerator boxes makes the thematic elements all the more childish and fun. It’s true that without a foundation in the characters and settings, much less will appeal to newcomers from the filming of Dangeresque 3. This is not a favorable entry point for Strong Bad newbies. But with the three prior episodes forming a backbone to the series, Dangeresque 3 makes for the strongest thematically drawn-up episode in the series since Episode 2: Strong Badia the Free, and Episode 4 is all the better for it.

Teen Girl Squad takes a pass this round, as does most of any heavy metal detecting, as the set pieces are more confined and (purposely) reused than in previous episodes. Plus developer Videlectrix tries to clue the player into taking greater note of people and places residing in the background. Remember that need for depth of view, or you could hit a roadblock in the otherwise fast and freewheeling pace that makes Strong Bad’s games such a breeze to play through. Plus, the (purposely) reused scenery – you’ll know what I mean when you begin travelling the world like you’re Carmen Sandiego – looks great on paper, but ends up being more curmudgeonly than clever at times.

The Fun Machine’s game this episode, Space Circus Catastrophe!, is particularly relevant to the storyline. It has Strong Bad carving a ‘90s space combat sim path through circus bears, ringmasters, and “evil clowns” while maneuvering away from asteroid-sized peanuts and popcorn. You’ll be making your way from the outer reaches of the solar system to the inner with increasing difficulty.

How that’s relevant, exactly, I’ll leave to film director Strong Bad to expound upon. The games that appear on the Fun Machine are subjective in taste, granted. But I’ll be the first to admit that with Space Circus Catastrophe! I grew insanely nostalgic for Wing Commander’s Paladin, Angel, Maniac, and the whole crew of the T.C.S. Tiger’s Claw; more so than any reminiscent gamer has a right to be.

Even if you catch onto Strong Bad and Co.’s “Looks like we’re going to have to jump!” catchphrase during Episode 4, you’ll want to ensure that you don’t jump past the credits. After completion, Extended Play opens up, and allows Strong Bad to walk through several of the game’s locations again, going over a list of DVD-like extras to include bloopers, interviews with the cast and crew, deleted scenes, and set tours of Dangeresque 3: The Criminal Projective.
The sheer directorial dedication Strong Bad lends to “Dangeresque 3 turns what could have been a regular Cool Game for Attractive People episode into a well-integrated synergism between comic and videogame.