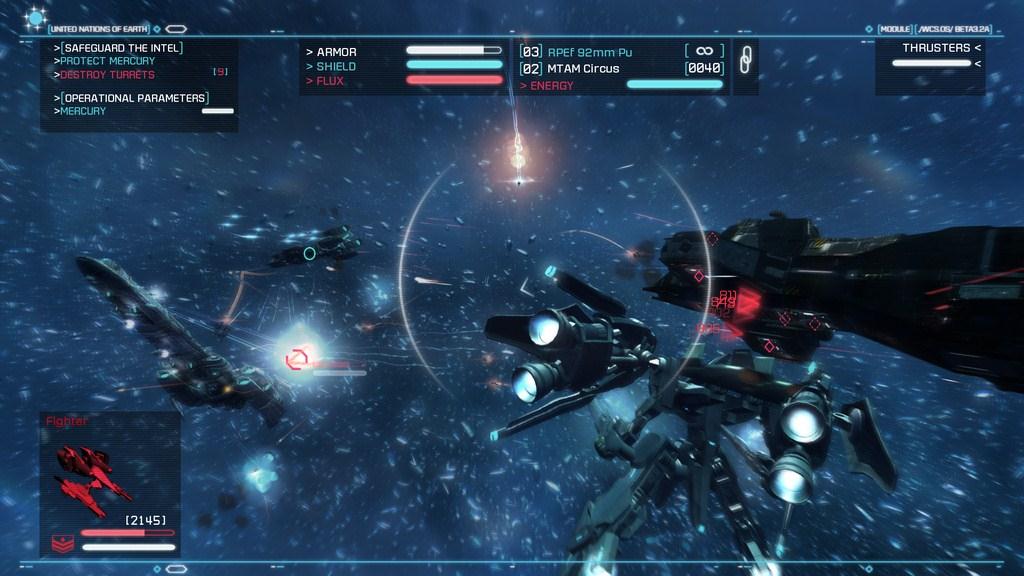 Written by Sean Colleli on 2/8/2013 for PC
More On: Strike Suit Zero
The thing I love most about the new culture of crowdfunding is that you see more games these days in genres that are considered unprofitable by the big publishers. So it is with Strike Suit Zero, a space combat sim that is the first game released by Kickstarter funded Born Ready Games. The UK-based studio clearly took inspiration from all corners of the space combat pantheon, borrowing more obvious elements from the Star Wars X-Wing series but also mixing in a heavy Japanese mecha influence, all set upon a sweeping cosmic backdrop that you’d expect from Freelancer or Dark Star One. It makes for a decidedly awe-inspiring and sometimes overwhelming experience, but is it a fun game? Well, yes, with a few caveats Strike Suit Zero is a hell of a lot of fun.

The story is pretty standard for this kind of game. There’s a civil war between the forces of Earth and its outlying colonies. Now the colonists have found an ancient alien power and they’re threatening to ride roughshod over Earth. As a pilot recovering from a recent mental breakdown, you are pressed into service in a desperate bid to beat back the encroaching rebels and stop them from unleashing this alien power. The story isn’t bad, per se, but it is a little cold; it’s mostly told during an attractive opening cinematic, and then updated during cutscenes that set up each mission. Aside from the opening most of the cinematics are rendered in-game and always when you’re in your cockpit. Characters are presented in hand-drawn comlink portraits so it’s hard to get acquainted with any of your allies or enemies for that matter.

But these games are rarely about their story, and it’s the core gameplay that really shines in Strike Suit Zero. I recall one of the Rogue Squadron developers mentioning that if your game is about doing one thing over and over—shooting down lots of enemy ships—that one thing has to be well done and be very, very fun. This is intriguing because Strike Suit Zero takes a lot of inspiration from the Rogue Squadron games, and it nails that core mechanic: the actual space combat is tight and addictive. That said, I’d definitely recommend dusting off the old flight stick for this one. Playing with a mouse is serviceable but it gets floaty and frustrating fast, and the comparison is night and day with a trusty joystick.

It might play better with a flight stick but Strike Suit Zero isn’t Tie Fighter or even Dark Star One, at least not completely. It’s simpler than those games which makes it easier to pick up and play, but it’s also a degree shallower. You can’t order your wingmen around, you won’t be juggling shield and power levels and most objectives boil down to protecting an ally, wiping out enemy fighters or assaulting platforms and capital ships. It really is a lot like Rogue Squadron but with vast open space battles instead of the mostly planetary-based missions from that venerable Star Wars series.

Most of the complexity happens before a mission, where you choose your ship and loadout. There are four ships with various balances that you unlock as the game progresses, with four main weapon types: machineguns, plasma cannons, dummy rockets and homing missiles. Machineguns have limited ammo but chew through shields quickly, whereas plasma cannons do more damage to ship hulls and only work for short bursts before needing to recharge. Dummy rockets fly in a straight line but pack a lot of punch, and are best for hammering away at capital ships. Homing missiles are handy for softening up nimble enemy fighters and come in a variety of flavors, including the iconic missile-spam spaghetti seen in so many mecha anime shows. As you work your way through each mission you’ll also encounter secondary objectives—usually mopping up non-essential targets, or keeping friendly ships from taking any damage—and these objectives unlock extra ship upgrades and more powerful weapons. 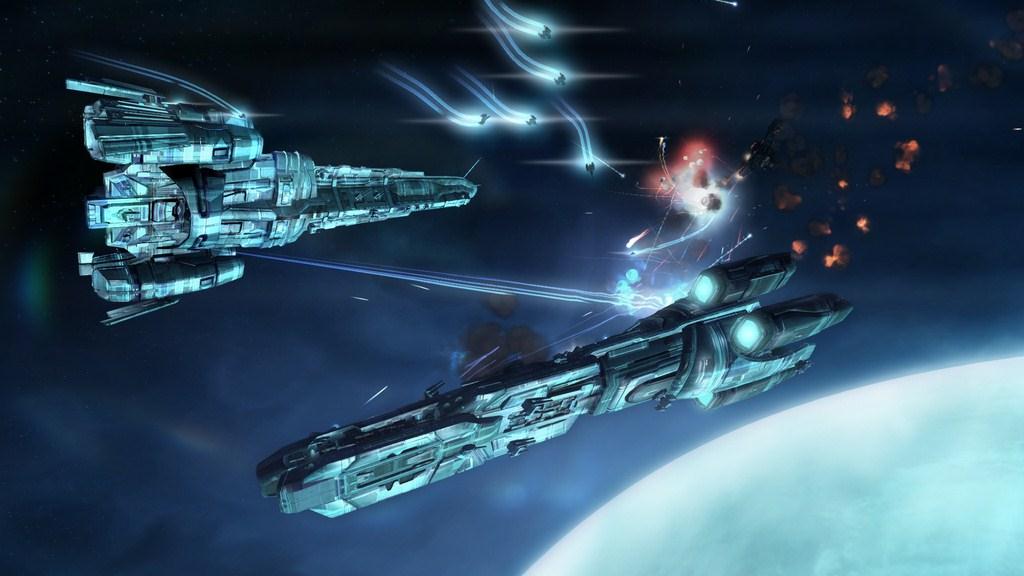 The game’s standout feature is the eponymous Strike Suit, which you don’t unlock until a couple missions into the campaign. The ship can function as a normal fighter, but once you fill up your flux gauge by destroying enemies, you can shift the fighter into strike mode which transforms your fighter into a mecha. This decreases its forward acceleration considerably but conversely allows it to dodge horizontally and corner on a dime. It also makes the weapons hit harder and lock on much easier, allowing you to lay waste to entire wings of pursuing fighters in a matter of seconds. If you can stretch out the dogfighting you can continuously charge your flux meter and stay in strike mode quite long, but sometimes it’s just too tempting to unleash a death blossom on the bad guys who have been pestering you. The Strike Suit really opens up the game and sets it apart from other space combat sims.

The game’s main problem however is difficulty balance, particularly with its checkpoint system. The checkpoints are few and far between which makes failing a section of the level rather unforgiving. I found myself playing the game’s objectives against it at times—learning the game’s logic patters, knowing when objectives drop and mopping up residual enemies beforehand to avoid unnecessary difficulty crunches. This was a reminder of the old Rogue Squadron days, but not a good one. You can’t save mid-level so if you get fed up with a particularly difficult mission, if you quit you’ll have to replay the whole thing, not just the part that’s giving you trouble. Maybe I’m just getting soft in my old age (I have no idea how 12 year old Sean managed the impossible task of beating Rogue Squadron with full Rebel Alliance honors on the N64) but Born Ready could have at least let me quit and pick up a mission halfway through later. 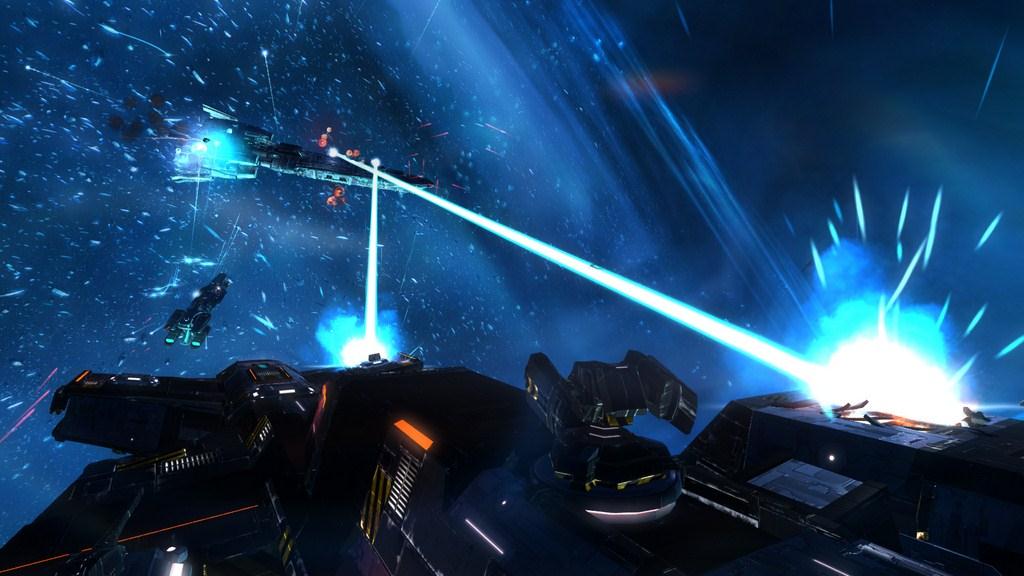 If you can muster through the rough spots, Strike Suit Zero is a banquet for the senses. The game throws you into one breathtaking stellar vista after another: glittering nebulas, shattered planets, and I’m pretty sure I know what Roy Batty meant in Blade Runner when he talked about attack ships on fire off the shoulder of Orion. My favorite setting was Earth orbit, where you can see the Moon hanging in the distance, tethered to Earth by a gossamer network of space elevators.
The actual ship geometry is relatively low-poly, but when you have dozens of them zipping around against one of these jaw-dropping backgrounds it’s easy to ignore. I actually liked the angular, milled-steel appearance of the ships and while the sharp color contrast—red for bad guys, blue for good guys—isn’t original, it makes the battles a lot less confusing and the Akira-esque colored plasma trails give each fight an ethereal presence. Famed mecha designer Junji Okubo did the Strike Suit designs, so the ships and their transformations are at once graceful and practical.

For the game’s music, Born Ready shows another aspect of doing their homework by hiring Paul Ruskay of Homeworld fame. Ruskay collaborated with Japanese recording artist Kokia for vocals, and Dehli-based Indian fusion band MIDIval Punditz. This gives the soundtrack a variety of evocative cultural influences, from eerie far-east melodies to thrumming electronica. It’s really something to hear and not what I was expecting at all; it makes the game feel distinctly alien and adds a profound grace to the cosmic backdrops. Like the rest of the game, the music is an eclectic fusion.

Strike Suit Zero is really something special. It combines a lot of ambitious ideas—some of them frustrating, but most of them good—into one hell of a freshman effort from Born Ready Games. If you can get through the difficult parts and learn to live with the somewhat unfair difficulty curve, you’ll find an engaging space sim that might play a lot like what you’ve experienced before, but looks and sounds completely fresh. It isn’t a long game at only 13 levels, but the bargain price of $20 is just right for this kind of daring, experimental homage to the space combat genre.
Strike Suit Zero borrows a lot from its predecessors, including an uneven difficulty curve, but it gets more right than wrong and the art direction and music are superb. For $20 its a AAA-looking game at a bargain price. Not too shabby for an indie studio's first game.